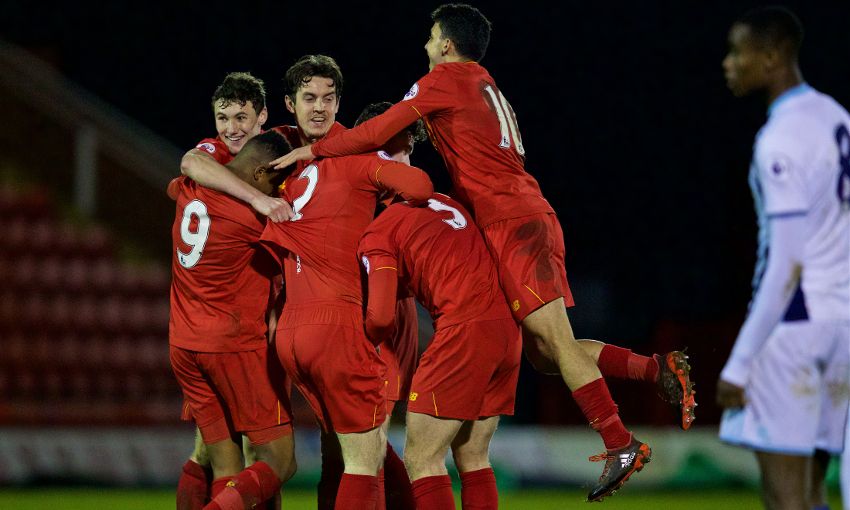 The full-back caught the opposition goalkeeper unaware with a long-range blast in the 91st minute, securing a fifth win in six games in the competition for Mike Garrity’s side.

The young Reds therefore consolidated top spot in Group G and impressively march on to the knockout rounds, with West Brom eliminated as a result of their defeat.

A cagey opening to proceedings at the home of Kidderminster Harriers meant 12 minutes had elapsed before either side managed a meaningful attempt on goal.

It came from Liverpool, as Yan Dhanda’s deep corner from the right hand side found Sheyi Ojo in space at the back post, but the winger misdirected his header wide to the left.

The young Reds were controlling possession comfortably, with West Brom happy to sit back and concede the ball, though the respective approaches yielded little goalmouth action.

Kane Wilson sought to change that for his team on the half-hour, jinking between several opponents in the right channel and using the freedom to clip a cross along the width of the box without finding a teammate.

Moments later, a similarly dangerous delivery from Matty Virtue at the other end also eluded the forwards in close proximity, before Ojo was thwarted by a perfectly-timed Jack Fitzwater tackle inside the area as he tried to reach Paulo Alves’ through ball.

With West Brom requiring victory on the night to claim second place in the group and qualification to the last 16, they emerged for the second half with greater impetus.

And when Liverpool struggled to adequately clear their lines straight from kick-off, a loose ball was fired towards goal from 20 yards by Sam Field – but the left-footed strike swerved off target.

They were fortunate to not fall behind within two minutes, however.

The lively Dhanda spotted an opportunity to aim for the far corner as he moved into opposition territory from the left and after Boaz Myhill got a touch along the way, the ball hit the right post and rolled across the goalline – but stayed out.

The No.11 then almost turned provider for Rhian Brewster, only for the young striker to see his blast blocked, and Virtue swept an angled shot narrowly wide midway through the half too.

Caoimhin Kelleher had to stretch superbly to claw out a clearance off Nathaniel Phillips which looked destined for the top corner, before a breakthrough finally materialised in added time.

Ojo attacked space along the right flank and when his ball into the middle broke to the edge of the box, Randall’s bobbling drive from around 25 yards found its way past Myhill to hand Liverpool the win.