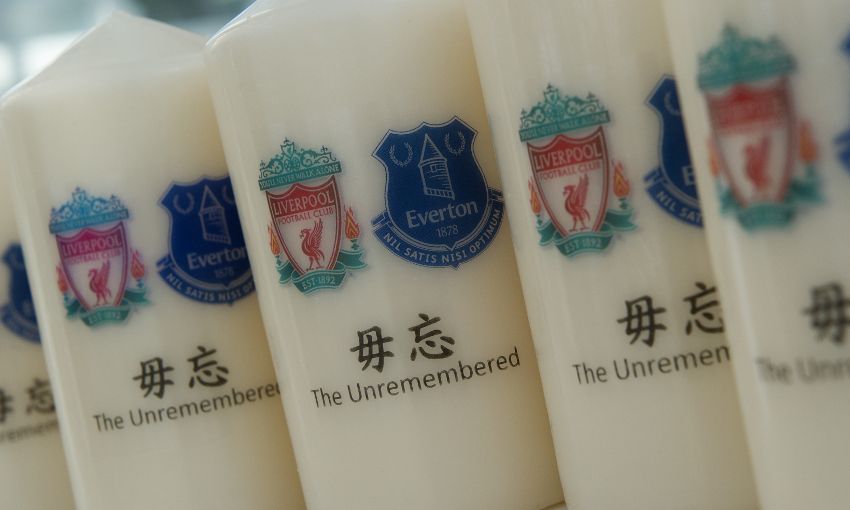 Young people from the academies of Liverpool and Everton were brought together last week to remember the sacrifice of the Chinese Labour Corps and those buried in the city.

The 30 representatives, 15 from each club, were united by the project The Unremembered: World War One’s Army of Workers on Tuesday March 21.

They visited five Chinese Labour Corps graves at Anfield Cemetery, which is located between the two teams, and were met by Mr Tam – from SeeYep Association – to learn about the Labour Corps and Chinese customs.

The youngsters laid white flowers at the graves, bowed in respect and held a reading about the Chinese Labour Corps. They then lit 30 white candles embossed with emblems of both clubs as Zilan Liao of Pagoda Arts performed the Last Post on the Chinese flute.

The two groups subsequently visited Chinatown, where the support of Liverpool’s Chinese community for the day’s events continued.

The event took place ahead of Qingming, or Tomb-sweeping Day, on Tuesday April 4 – a traditional Chinese festival for remembering ancestors.

Liverpool’s head of education and welfare, Phil Roscoe, said: “It was an absolute privilege for both teams to be involved in this event to remember the sacrifice of the Chinese Labour Corps.

“It is crucial that the players are educated on off-the-field matters such as World War One, so it was a real honour to be able to remember those that sadly passed away.

“We have a great relationship with Everton and this only highlighted the importance of unity. I would like to thank all those involved for making this poignant event happen.”

David Porter, head of academy education at Everton, said: “We’re dedicated to raising well-educated young people both on and off the pitch and this was a great chance for the young lads to take part in a unique and engaging experience.

“The city of Liverpool is renowned for its Chinese culture and it seemed appropriate to come together with Liverpool FC to pay our respects – another great example of how football can unite us all, no matter the colour of your team.”