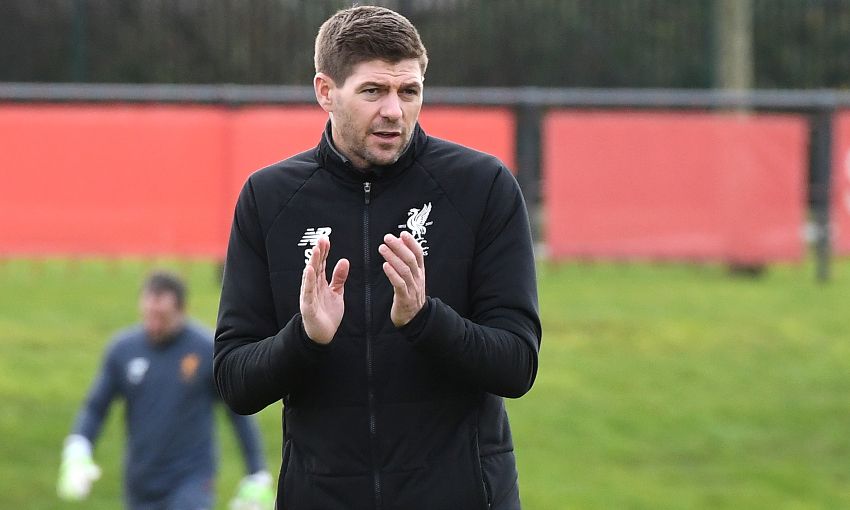 Gerrard's message ahead of Spurs quarter-final

Steven Gerrard has demanded a response from his Liverpool U18s side after they suffered their first defeat of the season on Wednesday afternoon.

The young Reds went down 4-0 at Tottenham Hotspur in the Premier League Cup quarter-finals, a result that brought their proud unbeaten streak to a close.

Scott Parker's Spurs took the lead shortly before the end of an even first half, with Adam Lewis then hitting the bar and Yasser Larouci going close as Liverpool fought hard to get back in the game.

But a double from Rodel Richards - the first of which came nine minutes after the restart - and Dilan Markanday's late strike sealed Tottenham's place in the last four.

Reflecting on his team's first loss of the campaign, Gerrard told Liverpoolfc.com: "It was tough to take and obviously a difficult one to swallow.

"The scoreline looks heavy and it feels heavy at the moment but I think it probably flattered Tottenham a little bit, although I did feel we quit in the game at 2-0 down.

"In the first 50 minutes of the game I don't think there was much in it. At 1-0 down we had an incredible chance to level the scoreline but we missed a sitter from a couple of yards out.

"Once Tottenham got the second goal, the disappointing thing for us as staff is we felt as though a lot of players in our team quit and that's the reason why the scoreline was heavy.

"Our first part of the season was strong but we told the lads they are there to be shot at it and today was a test against a southern team. We were found out because Tottenham absolutely deserved their victory.

"We need to learn from this and my message from the dressing room afterwards is if three or four players don't turn up in big games then it's very difficult to get the result that you want.

"I think I'm being kind when I said to them that only three or four never turned up today. Those players know who they are but it's gone and there's nothing we can do now to change the scoreline.

"It's all about what happens in the next fixture and I demand a reaction from some of those individuals and from everyone."

Saturday's home fixture with Derby County has been postponed due to the Rams' involvement in the FA Youth Cup, meaning the next game Gerrard refers to is the U18s' fourth-round tie with Arsenal in that competition.

The match will take place at Anfield on Saturday January 20 (kick-off 3pm), and Gerrard has called on his players to regroup ahead of their first outing of the season at the club's first-team home.

"Arsenal is an excellent fixture for a reaction and to bounce back," he said.

"Of course, as a player you don't want to wait 10 days until your next game when you are feeling the way you are, but there's nothing we can do about that. What the time does give us is a chance to work on a few things on the training ground.

"I'll be looking to see what reaction I get from individuals and collectively as a group between now and the Arsenal game."