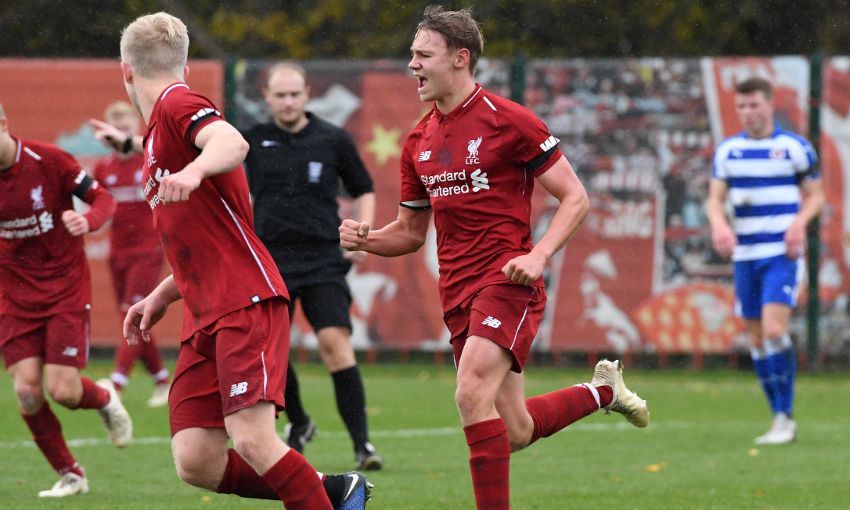 Liverpool U18s produced a powerful display to record a 6-0 victory over Reading in the Premier League Cup group-stage encounter at the Academy on Saturday.

The Reds dominated the first half for long periods and went close on several occasions but had to wait until the 38th minute when Paul Glatzel finally fired them in front.

Barry Lewtas’ side cranked up the pressure after the break and carved out several opportunities to extend their advantage.

They finally did so just after the hour when Glatzel slipped home his second of the afternoon with a neat finish when one-on-one with the goalkeeper.

Bobby Duncan then came off the bench to add a quick-fire brace, with Tom Clayton adding his name to the scoresheet in between.

Elijah Dixon-Bonner completed the scoring with a powerful close-range finish to seal an emphatic win for the home side.

Aiming to build on the 4-2 win at Stoke City in their first game of the tournament in September, Liverpool started assertively at the Academy and after Ki-Jana Hoever was foiled by a save from Myles Roberts, Edvard Tagseth was left clutching his head in his hands when his goal-bound effort was stopped on the line by Marcel Elva-Fountaine.

Fidel O’Rourke felt similar angst when he fired over unmarked on 16 minutes from eight yards out after being picked out by Hoever’s low centre.

Reading then demonstrated their threat on the counter just before the half hour when Thierry Nevers accelerated into space inside the Reds box and crashed a drive against Vitezslav Jaros’ near post.

However, the breakthrough finally arrived for Liverpool on 38 minutes. O’Rourke and Glatzel combined slickly and the latter found the target with clinical aplomb from close quarters.

Nevertheless, the lead was almost short-lived and Jaros was forced to claw Clayton’s wayward header back towards his own goal over the crossbar before the interval.

The pattern of play continued in similar fashion in the second period and Glatzel twice went close to converting when he first dragged a low drive across goal and wide before agonisingly coming a within a millimetre of turning the ball over the line from a low cross.

But the striker wasn’t to be denied on 62 minutes when O’Rourke sent him scampering into space on the right corner of the Royals’ area, and he dispatched a low shot underneath Roberts.

Duncan and Dixon-Bonner were introduced shortly after, replacing Glatzel and Jack Bearne – and they combined promptly for the third.

Dixon-Bonner surged into the area from a central position before switching left to Duncan, who netted with his first touch of the game by sweeping in.

Then, two goals in as many minutes added extra gloss to Liverpool’s lead when Clayton touched in from Luis Longstaff’s cross at a corner before Duncan profited from a mis-placed pass from Roberts to convert.

The forward almost complete his hat-trick, but Roberts atoned for his earlier mistake with a fine save; however, Dixon-Bonner did make it six for the home team when he lashed in from O’Rourke’s lay-off inside the box.