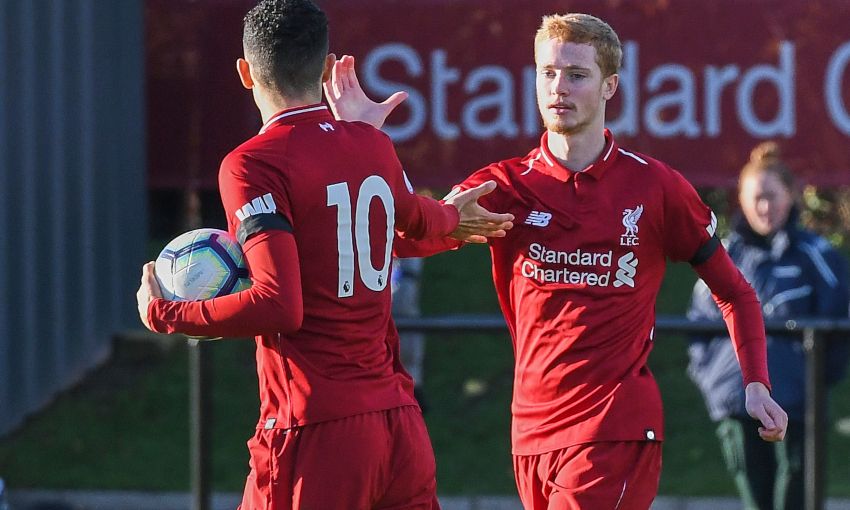 Glen McAuley was on the mark as Liverpool U23s played out a 1-1 draw with Burnley in the group stage of the Premier League Cup at the Academy on Sunday afternoon.

Bobby Adekanye and Rafael Camacho both missed penalties and the away side played the majority of the game with 10 men.

The young Reds were without injured captain Matty Virtue, so Adam Lewis was switched to midfield with Yasser Larouci making his U23s debut at left-back.

Liverpool had a great chance to take the lead on 35 minutes from the penalty spot; Burnley defender Jordan Cropper handled on the line and was shown a straight red card.

Camacho stepped up to take the spot-kick but failed to hit the target, sending his effort wide.

And it was Burnley who took the lead on 52 minutes.

Kamil Grabara denied Dan Agyei from close range but the ball fell invitingly for Tinashe Chakwana to make no mistake on the follow-up.

Liverpool’s response was excellent, however, and they levelled just two minutes later.

McAuley headed home a pinpoint delivery from Camacho for his first goal at U23 level.

The Reds could have edged in front when they were awarded a second penalty with 11 minutes left on the clock.

This time Adekanye took the responsibility - but saw his shot blocked by Adam Legzdins.

The Burnley stopper then produced further heroics in the last minute, denying McAuley the winner with a double save.

Reflecting on the draw, U23s boss Neil Critchley told Liverpoolfc.com: "It was a frustrating day for us and that is becoming a recurring theme.

"We lacked intelligence in our play today and our decision-making in the final third let us down.

"We missed two penalties and had a great chance in the last minute to win the game, so it was very frustrating."