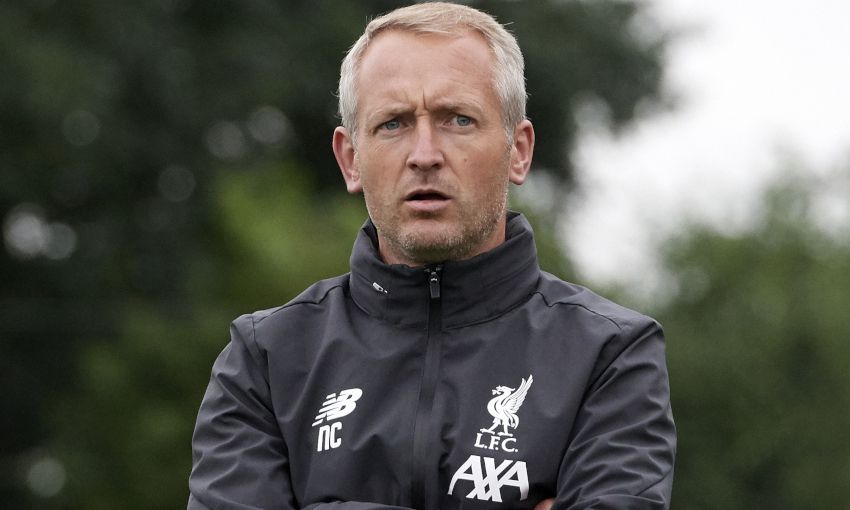 Liverpool U21s lost out in a penalty shootout against League One side Fleetwood Town after an entertaining Leasing.com Trophy encounter ended 1-1.

Neco Williams’ equaliser was enough for the young Reds to secure their first point in the group but they missed out on the opportunity of a bonus point after losing the spot-kick battle 4-3 at Highbury Stadium.

Williams, Layton Stewart and Elijah Dixon-Bonner all converted their penalties but Fleetwood goalkeeper Matt Gilks saved from Jake Cain and Tom Clayton to take the bonus.

With several of his squad enjoying the trip to MK Dons with Jürgen Klopp’s first team, Neil Critchley named a youthful line-up with Stewart, Billy Koumetio, Cain and Tom Hill all stepping up from Barry Lewtas’ U18 side.

The Reds employed three centre-backs in their formation and it was one of them in Clayton who created the game’s first opportunity.

His stunning crossfield ball allowed Cain to play in wing-back Tony Gallacher down the left and his low cross was only just put past the post by the sliding Stewart on 11 minutes.

However, the response was immediate from Joey Barton’s team, which also featured a host of changes from Saturday’s League One victory over Rochdale.

Ashley Hunter played in Harvey Saunders, who rounded Ben Winterbottom in the Liverpool goal but somehow put his effort against the post.

Yasser Larouci was used in an unfamiliar position high on the right-hand side but he looked a good outlet for the young Reds all half.

His clever pass on the quarter-hour mark found Stewart but Gilks was instantly off his line to smother the chance.

Larouci then led a great break from a corner on 30 minutes but, with four teammates alongside him, his driven pass eluded them all and the opportunity was lost.

The second half started well for the Reds with Hill almost registering his fifth goal of the season. The Formby youngster exchanged passes with Gallacher before his goalbound effort was deflected narrowly wide by Ashley Eastham’s block.

Gallacher was involved again within minutes, his arrowed strike fizzing just past the post after he was picked out by a fine Cain pass.

Koumetio headed narrowly over from a deep Williams cross but was then needed to make a fine tackle in his own box after Hunter was released by a long throw out from Gilks.

The deadlock was finally broken on 76 minutes when a Fleetwood corner was headed back into the danger area and Peter Clarke stabbed home.

The young Reds were not discouraged, though, and equalised within two minutes through Williams. The defender, who scored a spectacular effort against Oldham Athletic earlier in the group, followed up with a fine strike after good work from Hill.

An excellent Williams run, where he kept going despite being fouled, didn’t get the end it deserved when he fired over, while the visitors had to survive several dangerous set-pieces before the final whistle sent the tie to penalties.