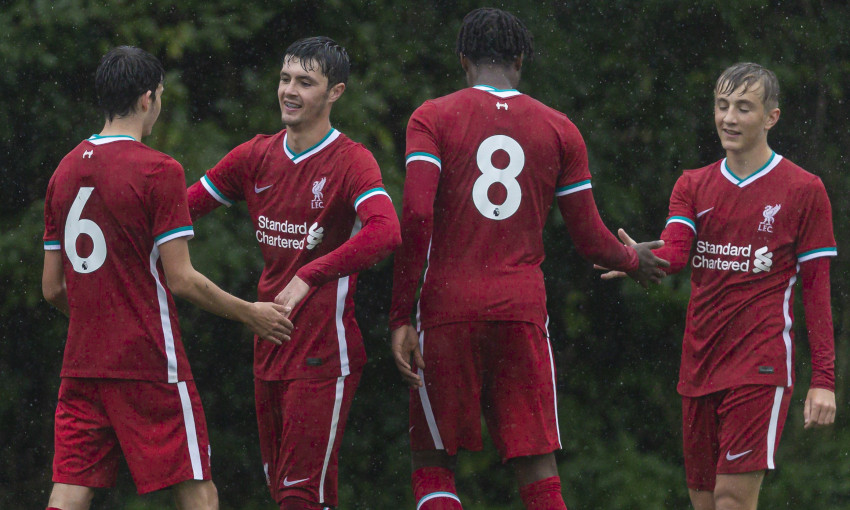 The young Reds had to be patient as they dominated the ball amid torrential rain at Rovers’ Academy, with Stewart eventually breaking the deadlock shortly before the break.

The Scouse striker, who also netted three against Stoke City a fortnight ago, then won and converted a penalty early in the second half and duly completed his treble via an impressive finish with 66 minutes gone.

Victory means Marc Bridge-Wilkinson’s side bounced back strongly from last week’s defeat by Manchester City and have six points from three U18 Premier League North outings so far in 2020-21.

Liverpool nearly took the lead in the second minute when Max Woltman hit the post following good work down the left by Stewart.

Stewart and Isaac Mabaya each went close before Woltman clipped the woodwork again midway through an opening period during which Jakub Ojrzynski did not have a save to make.

LFCTV GO: The best of the Blackburn action

Bridge-Wilkinson’s team finally moved ahead with five minutes of the half remaining, when a long ball caused confusion in the Blackburn backline and Stewart capitalised on a misplaced header to fire low beyond goalkeeper Aidan Dowling.

The advantage was doubled 10 minutes into the second half after Ojrzynski had denied Zak Gilsenan at the other end.

Woltman released Stewart with a pass from the halfway mark and the forward was brought down by Dowling as he rounded the ‘keeper. The No.9 picked himself up to dispatch the spot-kick into the bottom-left corner.

Melkamu Frauendorf struck the crossbar on the hour before Stewart notched his hat-trick goal in style, as he controlled a ball over the top on his knee before lobbing the advancing Dowling on the volley.