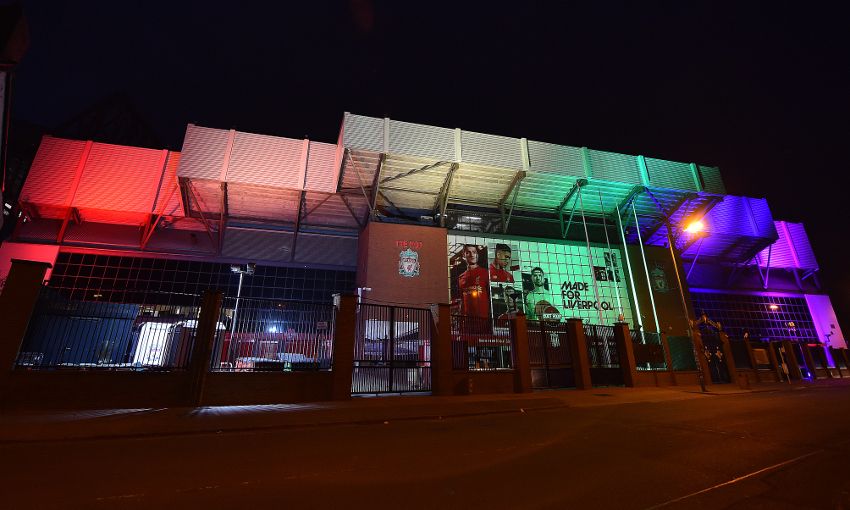 Liverpool FC will show its colours in support of this year's Liverpool Pride festival on Saturday with a host of activities taking place across the club.

This will be the club’s fifth year supporting Liverpool Pride, which was first established in 2010 in memory of the murdered gay teenager Michael Causer.

Michael tragically lost his life in 2008 and the festival was created in his memory and to celebrate the LGBT (lesbian, gay, bisexual, transgender) communities.

This year’s Liverpool Pride will take place this weekend on Saturday and Sunday promoting the theme of International Love – to celebrate LGBT lives around the world and highlight the places where it’s still illegal to be LGBT.

As part of Liverpool Pride’s ‘Come Out of the Shadows’ initiative, Anfield’s famous Kop will join many iconic buildings across the city in being lit up each night in the colours of the rainbow flag from July 22 to July 30.

On Saturday, LFC’s CEO Peter Moore will lead club employees at the march alongside Kop Outs, an LGBT fan group for Liverpool fans and the wider community, in a celebration of the culture of the city.

The LFC team will be encouraging Reds fans to get involved in the Pride march by having their picture taken with special LFC and Pride-themed Instaframes throughout the march. Fans who send us their pictures via Instagram (@liverpoolfc) will be entered into our ‘Reds Go Rainbow’ competition with the opportunity to win a signed shirt and other LFC prizes. Reds marching staff will also be giving away LFC-themed rainbow armbands.

Moore said: “We are passionate about equality, diversity and inclusion and are committed to its promotion with our fans, employees, players and the wider football family. This year, we were awarded with the Premier League Equality Standard Advanced Level for our work and commitment to equality. We are the only Premier League club to hold this, which is something that the whole team at the club are immensely proud of.

“Five years ago we were the first Premier League club to support a UK Pride march and I am delighted to be continuing this support by marching alongside my colleagues at this year’s Liverpool Pride.”

LFC supports city’s Pride celebrations with a host of activity

Kop lights up to show support for Liverpool Pride 2016