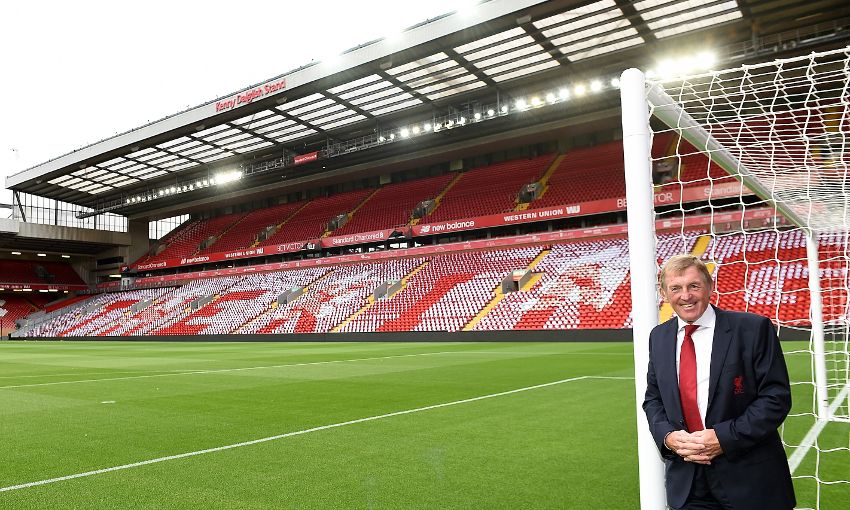 Liverpool FC are delighted to announce that Anfield's Centenary Stand has been officially renamed the Kenny Dalglish Stand in recognition of his unique contribution to the club.

The renaming ceremony took place at the stadium on Friday, 40 years after the Scot’s association with the Reds began following a £440,000 move from Celtic in 1977.

Accompanied by his family, friends, former teammates and Liverpool dignitaries past and present, the 66-year-old was honoured for his services to the club as player, manager and non-executive board director.

“I’m hugely honoured to be recognised by Liverpool in this way,” said Dalglish.

“This is a club that means so much, not just to me, but to countless people who have contributed to it either through their ability as footballers, their passion as supporters or their commitment as owners and administrators.

“If the people who matter think I’ve played some small part in the success that we have enjoyed over the years, that is an honour in itself because I am as aware as anyone that no individual has ever been or will ever be bigger than the club.

“I just hope that the people sitting in the stand that bears my name derive as much enjoyment from watching Liverpool as I have had from playing for them.”

The decision to honour Dalglish was made by Liverpool’s owners, Fenway Sports Group, who wanted to pay a fitting and lasting tribute to an individual whose remarkable achievements as a player and manager have stood the test of time.

Off the pitch, the support he provided to the Hillsborough families in the immediate aftermath of the disaster and in the years since underlines both his commitment to Liverpool fans and the people of Merseyside.

Those qualities are also evident in his work for the Marina Dalglish Appeal, a charity set up with his wife, which helps cancer sufferers and their families on Merseyside.

Speaking on behalf of FSG, John W Henry, Tom Werner and Mike Gordon said: “We know as one of the ultimate team players in Liverpool’s illustrious history, Kenny will be uncomfortable with the individual attention that he is receiving but given his unique contribution to this club it is wholly merited.

“There are many ways in which a person can be honoured but when we started discussing how to pay tribute to Kenny, one of the main considerations was doing it in a manner which involved the supporters because of the joy that he has brought to them over the years.

“In that respect, renaming the Centenary Stand in his honour made perfect sense, particularly in this, the club’s 125th anniversary year.

“It is testament to Kenny’s willingness to think of others that from the moment we began formulating plans for the Kenny Dalglish Stand he made it clear that for it to be representative of him it had to be inclusive.

“To that end, he came up with the idea of the Kenny Dalglish Community Suite, which is housed within the stand and will be used by the club’s Red Neighbours programme with a focus on supporting the elderly, addressing food poverty, encouraging physical activity and creating memorable experiences for young people.

“This gesture means more local people who live in the Anfield area will be able to access what is one of sport’s most iconic stadiums in a truly meaningful way, which Kenny hopes will bring significant benefits to the local community.

“Having provided so much joy on the pitch, it speaks volumes for Kenny that even though his playing days are now behind him his desire to make a positive difference on behalf of the people of Liverpool remains as strong as ever.

“As a club we are fortunate to have been served by numerous individuals who have been not just leaders in their field, but also standard-bearers for the values which make Liverpool great. Given his renowned modesty, Kenny would be the first to admit that he is not the only player or manager to fall into that category but from our point of view he personifies the qualities which make Liverpool Football Club the world-renowned sporting institution that it is, and for that reason he is fully deserving of today’s recognition.”