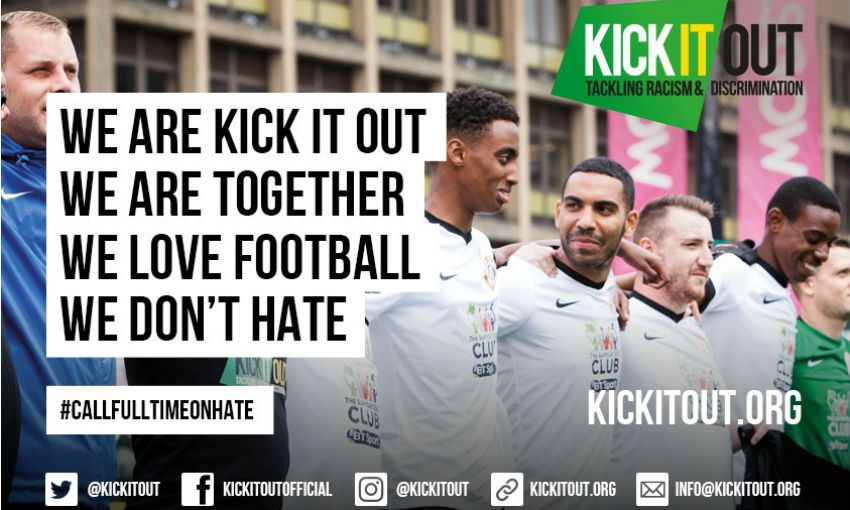 Liverpool FC will dedicate Saturday's Premier League fixture with Swansea City to celebrating the work of Kick It Out, football's equality and inclusion organisation.

The Reds will host a variety of activities throughout the week to highlight Kick It Out’s ‘Call Full Time On Hate’ initiative, which aims to utilise and engage the collective force of football to tackle discrimination and hate incidents at every level of the game.

The club’s charity, the Liverpool FC Foundation, will host a hate-crime education session at 12 local schools as part of its schools’ tournament with The Anthony Walker Foundation.

The Red Neighbours’ Young Fan Support Team will proudly fly a Liverpool and Kick It Out flag on the pitch before kick-off, and both the Reds’ and Swansea’s players will wear Kick It Out T-shirts during the warm-up.

Since 1993, Kick It Out has worked throughout the football, educational and community sectors to challenge discrimination, encourage inclusive practices and campaign for positive change.

The ‘Call Full Time On Hate’ initiative, which was launched at the beginning of the 2016-17 season, also seeks to highlight the positive messages of inclusion echoed by the football authorities, clubs, players, managers and supporters’ groups.

Lord Herman Ouseley, chair of Kick It Out, said: “Our anti-hate initiative aims to build on existing positive education and awareness-raising projects supported by clubs and their foundations in their local communities.

“Football is at the forefront of helping its fans, players and young people in their local communities to understand the damaging effects of prejudice and discriminatory abuse.

“‘Call Full Time On Hate’ aims to ensure the game remains as inclusive and welcoming as possible and that it reiterates a zero tolerance approach to discrimination.”

One hundred local youngsters kitted out for the 2020-21 season