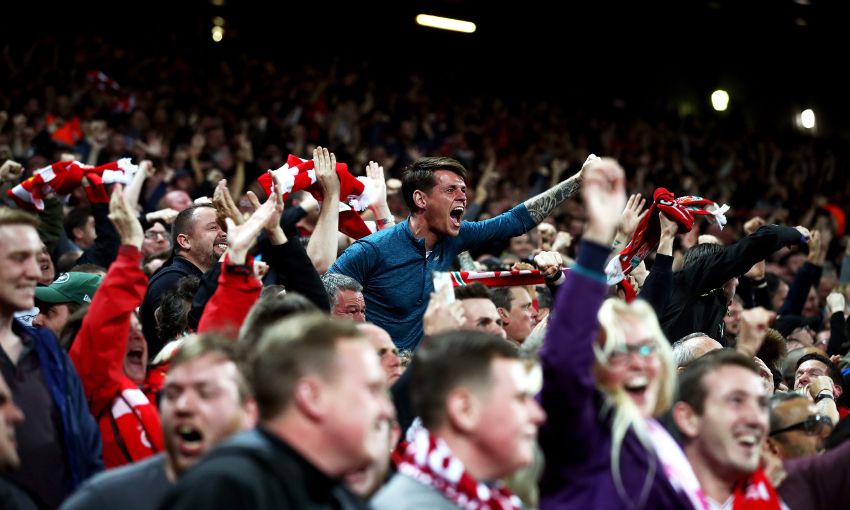 With the dust just beginning to settle on Liverpool's late, late victory over Paris Saint-Germain, we take a last look back at five things we loved in the Champions League thriller...

Roberto Firmino’s catalogue of celebrations since joining the club in 2015 have been almost as enjoyable to watch as the Brazil international’s impeccable ability and incredible work-rate.

Three days before this game, the No.9 had been forced off against Tottenham Hotspur with an eye abrasion which left his availability for the clash with PSG in the balance.

So, when he thrashed in the winning goal on Tuesday night, the source material for his reaction came as no surprise, Firmino raising a hand to cover the left eye that thankfully sustained no lasting damage.

Even Jürgen Klopp had a go himself…

Statistically, no team in Europe can match Liverpool’s goalscoring prowess in the Champions League since the beginning of 2017-18, with the Reds having now notched 44 in their 14 competition proper matches during that time.

PSG pitched up at Anfield with one of world football’s most formidable attacking trios, however, in the form of Brazil superstar Neymar, World Cup winner Kylian Mbappe and goal machine Edinson Cavani.

But, aside from Mbappe’s late strike at the Kop end to briefly restore parity for the visitors, the Reds’ proactive, physical approach to keeping the three forwards quiet was a success.

An atmosphere to remember

The quality of football exhibited on the pitch was matched by the atmosphere generated off it at Anfield, with the visiting Paris Saint-Germain fans a huge factor in a frenzied occasion.

‘Allez, Allez, Allez’ continues to be the soundtrack to Liverpool’s Champions League adventures, sung at ever increasing decibel levels as the Reds set about the challenge of ‘conquering Europe’.

And when Firmino found the bottom corner with 91 minutes on the clock, well, can any feeling compare?

Neymar is renowned for his tricks and flair but the PSG forward was on the receiving end of one bamboozling piece of footwork on Tuesday night.

Sadio Mane was the architect at the edge of the opposition box, moving the ball and his body at a pace that his fellow attacker simply could not stop…

Andy Robertson is not short of fans.

The Liverpool left-back has become a supporters’ favourite since joining the club from Hull City last summer, in no small part thanks to a series of tireless performances en route to the Champions League final in May.

He was named Scotland captain earlier this month, too, and has started the new campaign in excellent form, claiming a trademark assist for Daniel Sturridge’s opener against PSG.

But Robertson’s biggest fan – certainly the cutest – might have been found ahead of the match. Meet five-year-old Jerron…