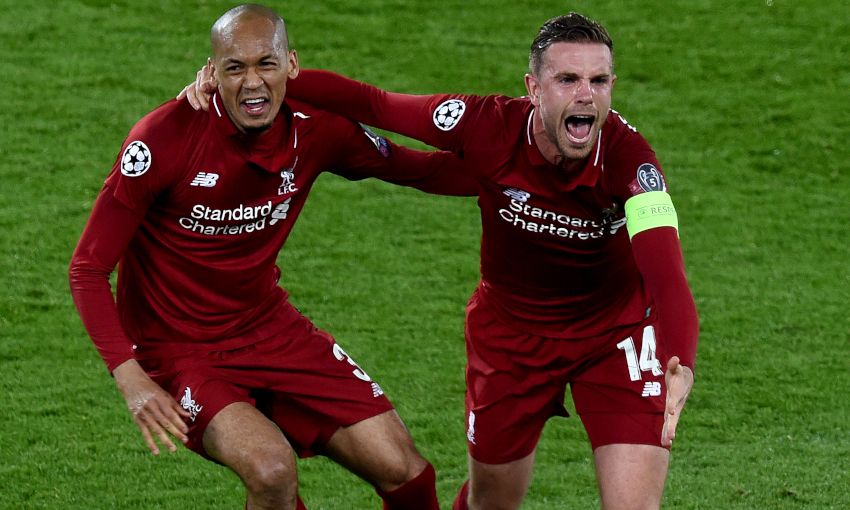 Liverpool reached the Champions League final for a second successive season after a truly momentous night at Anfield.

Trailing 3-0 from the first leg of the semi-final to FC Barcelona, the Reds stormed back to win 4-0 at Anfield and 4-3 on aggregate.

Divock Origi and Georginio Wijnaldum both struck twice as Jürgen Klopp's charges reached the showpiece in Madrid on June 1.

This was a night like no other. Even for a club renowned for producing miracles on the European stage, Klopp's Liverpool broke new ground. Forget St Etienne, Olympiacos and Chelsea, this staggering, historic achievement belongs in a class of its own. Anfield folklore has a new thrilling chapter after the Reds booked their passage to the Champions League final in Madrid on June 1 in sensational fashion. Talk about triumphing in the face of adversity. Written off after that crushing 3-0 defeat in the Nou Camp six days earlier, the Reds had lost Mo Salah, Roberto Firmino and Naby Keita to injury. The odds were stacked against them but somehow they produced a performance of breathtaking effort and intensity. There were heroes all over the pitch. It felt like a work of fiction but this was glorious reality. Just when Liverpool's remarkable season looked destined to finish with them empty-handed, they find themselves just 90 minutes away from lifting the European Cup for the sixth time and exorcising the demons of Kiev.

They've seen some things in this incredible stadium, but nothing quite like this. Liverpool are in the Champions League final. Just let that sink in for a moment. Klopp prayed for a miracle and his players delivered. This was a night to rank alongside any in this club's remarkable history. The greatest Anfield has ever seen? It must be. "I will remember it forever," said Klopp. He looked drained in his post-match press conference, and no wonder. How could he be calm on a night like this? At the end, after the final blast of referee Cuneyt Cakir's whistle, Liverpool's players and staff lined up on the edge of the six-yard box while the Kop serenaded them. "You'll Never Walk Alone," they sang. It was spine-tingling. There were tears among the players. Even the Barcelona fans, dumbstruck, found time to applaud. True class from the shell-shocked Catalans. This is what Klopp has created. This is what this club has become, a fusion of emotion and passion, quality and cunning. Winners. Heroes. Adored by their supporters, and rightly so.

Has Alisson Becker ever had to save that many shots in a single match since signing for Liverpool? The Brazilian is usually reduced to a spectator as the Reds run riot up top, but here he was busier than ever as Barca pushed for the goal that would've killed the tie, particularly in the first half. It allowed for fans to finally see proof that Klopp signed more than just a good distributor of the ball in bringing Alisson in from Roma. The 26-year-old is a magnificent shot-stopper, who deserves his place in the Champions League final as much as any of his teammates. Captain Jordan Henderson is a man who embodies what being a Reds captain is all about: courage, commitment, quality. He showed all of those characteristics against a Barcelona midfield that might have outstripped him in terms of raw talent, but never in terms of desire. Just when you thought he had nothing left, another lung-busting press from the centre of the park helped the hosts get back in shape or retake the ball. If he performs like that in Madrid, he will be lifting that famous trophy.

This is Liverpool's gift: to rip up what you thought you knew about football and footballers, to take you – mentally and physically – to a place you don't know and never wanted to go. To make your eardrums ring and your sinuses twang and your heart thump to the point where it's all you can think about. To the point where you start to question yourself. To the point where you don't realise you've left a massive gap in your left channel until it's just a fraction of a second too late. The weeks ahead will be full of hustle and bustle. There's a Premier League title to be won and lost. There's Madrid, there's Ajax or Tottenham, there's hours of scrabbling around on Expedia and Skyscanner and WhatsApp trying to find a bed or a floor to kip on. But when the curtain comes down on this season, and for many years to come, Liverpool fans will bond over the belief and the disbelief of this night. "The Barcelona game," they'll say, and that'll be all they need to say. A night when Anfield heaved with the heft of the impossible, when a crowd of thousands and an audience of millions lost itself in the mad, dangerous intoxication of football.

There have been many momentous Anfield nights in Liverpool's European history but this one tops them all. Nobody gave the Reds a chance of overturning a 3-0 first-leg deficit to mighty Barcelona, but somehow they did it after a pulsating performance. Trent Alexander-Arnold was just sensational. Defensively, he was magnificent, his passing was almost Steven Gerrard-like and his crossing rivals anything in Europe. Made the second goal with a wicked, low delivery and showed quick thinking to create the decisive fourth goal with a clever corner that caught every Barcelona player napping. Not something you'd normally see from a 20-year-old, but this is no normal 20-year-old. On a night when Liverpool had countless players step up, Fabinho might just have been the pick of the bunch. What he did was astonishing, particularly given that he was harshly booked after 10 minutes for a brilliant tackle on Suarez. He set the tone early with his tackling and aggression, and he didn't let up. Even in the closing minutes, he was there harrying Messi out of possession. Very few players could have kept Messi this quiet, but Fabinho's display was monstrous.

'Like being the best man at a wedding': Des Kelly on reporting on LFC 4-0 Barca

Back from the Brink: The players describe Liverpool 4-0 Barcelona