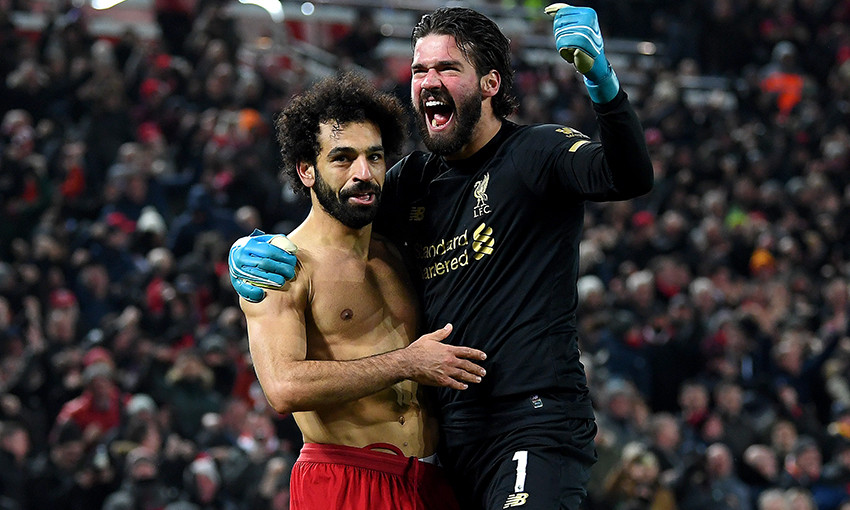 Here's a bite-sized breakdown of the weekend's action, including reaction to Liverpool's latest win, your response to Alisson Becker's brilliant celebration, how the Reds' rivals fared and more...

Strikes from Virgil van Dijk and Mohamed Salah gave Jürgen Klopp's men a 2-0 victory over Manchester United at Anfield on Sunday and moved them 16 points clear at the top of the table.

The hosts took the lead on 14 minutes with Van Dijk nodding in Trent Alexander-Arnold's corner. The win was sealed in stoppage-time when Salah collected a raking pass from Alisson, held off Daniel James and applied the finish.

Liverpool have now scored in all their opening 22 league fixtures of the season - a new club record in the top-flight.

Klopp: "We played outstandingly well; we dominated the opponent. We scored from the set-piece but had other situations obviously. And then the start of the second half was absolutely brutal – wow. We defend then with a lot of passion and big heart and stuff like this. Then the last situation in the game, Alisson Becker, what an assist and then Mo Salah, what a goal. If you look at the performance over 90 minutes or 95 or 98, we are the clear deserved winner and that's all what we want to be."

Jordan Henderson: "It's special, we’re enjoying our football, but you’ve got to stay hungry, you’ve got to keep learning and keep wanting more. To be fair, this group of players wants to do that. Of course, the manager is on us all the time to improve and we know we can certainly improve. It’s about every single day, keep going and keep going until the end of the season.”

...that Alisson's length-of-the-pitch run and knee-slide celebration were possibly even better than his sensational assist for Salah's first-ever goal against Manchester United. 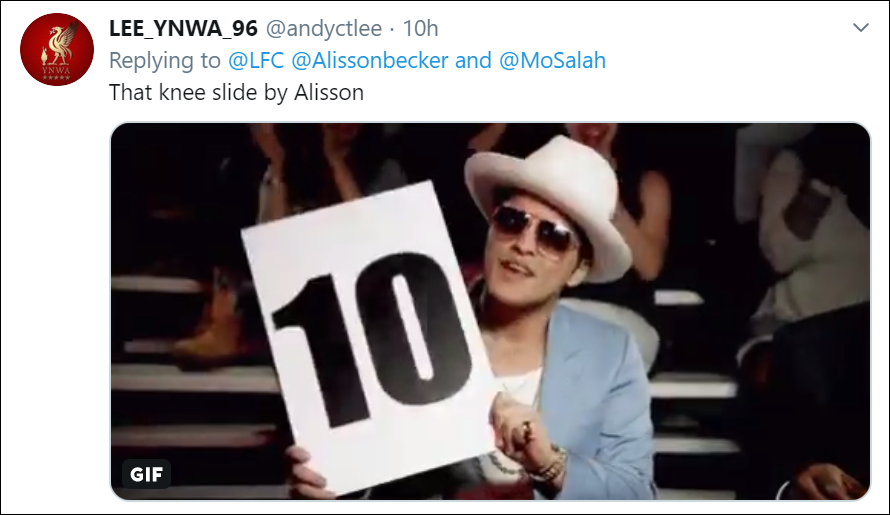 The game in numbers...

Alexander-Arnold's corner for Van Dijk's opener was the full-back's 21st assist in the Premier League since the start of last season - more than any other player in the competition.

Meanwhile, Alisson became the first Liverpool goalkeeper to notch an assist in the top-flight since Pepe Reina did it against Sunderland in March 2010.

Today was the 150th win as @LFC manager for Jurgen Klopp in all competitions, in his 244th game. His last 50 have come in 63 matches.

Klopp's Liverpool have taken 91 points from the last 93 available to them in the Premier League - winning 30 and drawing one of their last 31 games.

The Reds are the first team to score in all their first 22 matches of a Premier League season since Arsenal in 2001-02. That Gunners side went on to score in every game that term and win the title.

A last-minute own goal from Fernandinho denied Manchester City a late come-back win at the Ethiad and handed Crystal Palace a 2-2 draw.

Eagles striker Cenk Tosun - on loan from Everton - put the visitors ahead after 39 minutes. A pair of goals from Sergio Aguero in the 82nd and 87th minutes made it 2-1 before Fernandinho put through his own net.

City remain in second place in the table as Leicester City were beaten 2-1 at Burnley, despite taking the lead through Harvey Barnes.

Liverpool travel to Molineux Stadium on Thursday night to take on a Wolverhampton Wanderers side who are pushing for a place in the top four.

Nuno Espirito Santo's side fought back from two goals down to win 3-2 at in-form Southampton on Saturday.

The Reds beat Wolves 1-0 in an eventful match at Anfield in December, which you can see highlights of below.