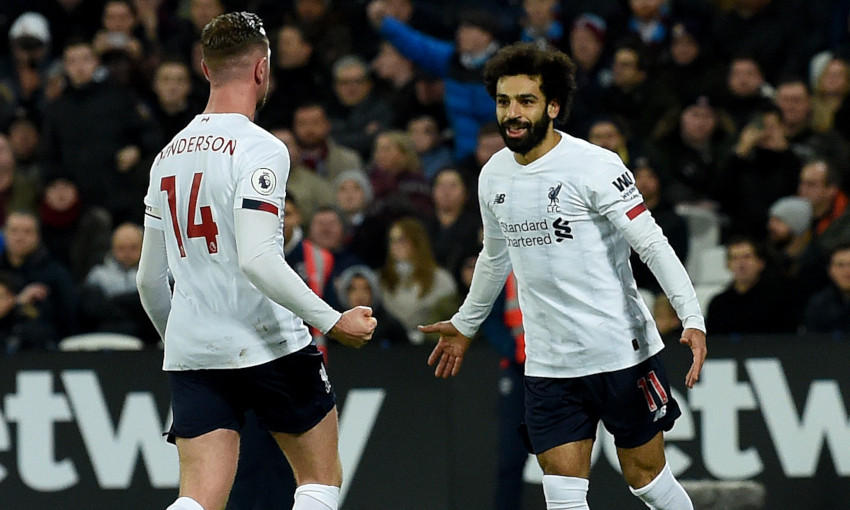 Mohamed Salah netted a penalty and then provided the pass for Alex Oxlade-Chamberlain to seal a 2-0 win for Liverpool at West Ham United on Wednesday night.

The result saw the Reds increase their lead at the top of the Premier League to 19 points.

Victory here at West Ham was enough to take the table-topping Reds a blockbusting 19 points clear of their closest challengers Manchester City. Victory here also means that the runaway Premier League leaders have now beaten all other 19 teams in the division this term. This latest triumph - Liverpool's 23rd of the campaign - sees them edge up 70 points before January's final hours are through. For emphasis, it is more than twice the points tally of Manchester United in fifth. It's 30 more than Chelsea who currently occupy the final Champions League spot. Klopp's Liverpool are making the unsustainable seem ordinary. It's all become frighteningly routine. How long can such breathtaking consistency realistically last? Klopp will argue for some time yet. It's now nine successive penalty conversions from the Egypt superstar, dating back to October 2017 and five more goals this season will see him become the first player since Robbie Fowler in 1997 to net 20 or more in three consecutive campaigns.

Salah, with 16 goals, is now Liverpool’s leading scorer in all competitions this season, the Egyptian taking advantage of Sadio Mane’s absence to re-establish himself as Klopp’s go-to man. Since his arrival at Liverpool in 2017, Salah has scored more Premier League goals than any other player. This was his 66th, converted emphatically from the spot after Issa Diop had brought down Divock Origi, 10 minutes before half time. Salah’s other party piece is to score and assist in the same game. He has done that on 14 occasions in the last two-and-a-half years – no other Premier League player has managed more than nine – the latest secured with a sublime second-half pass with the outside of his foot, allowing Oxlade-Chamberlain to make it 2-0. This being Liverpool, of course, there was a piece of history to be made. For the first time, the Reds have beaten every single team in the top-flight during a single season. Not even the great sides of Bill Shankly, Bob Paisley or Kenny Dalglish managed that particular feat – that is how special this team are.

It should send a wave of terror throughout the Premier League that Liverpool were able to produce such an ordinary performance against West Ham United at the London Stadium and still win 2-0. Salah scored a first-half penalty and set up Alex Oxlade-Chamberlain to seal the game in the second period. Alisson Becker’s brilliance made sure the lead was never in danger. Liverpool are 19 points clear at the top. Liverpool do not need massive leads with Alisson in goal. The Brazilian rounded off a fine night with a full-stretch parry of a Rice header. With Salah at one end and Alisson at the other, Klopp’s team do not have to be at their best to win with ease.

Jordan Henderson has taken his game to another level of late and was excellent once again tonight. Snapped into tackles, moved the ball well, and showed his underrated vision with the pass that put Liverpool in position to create their second goal.