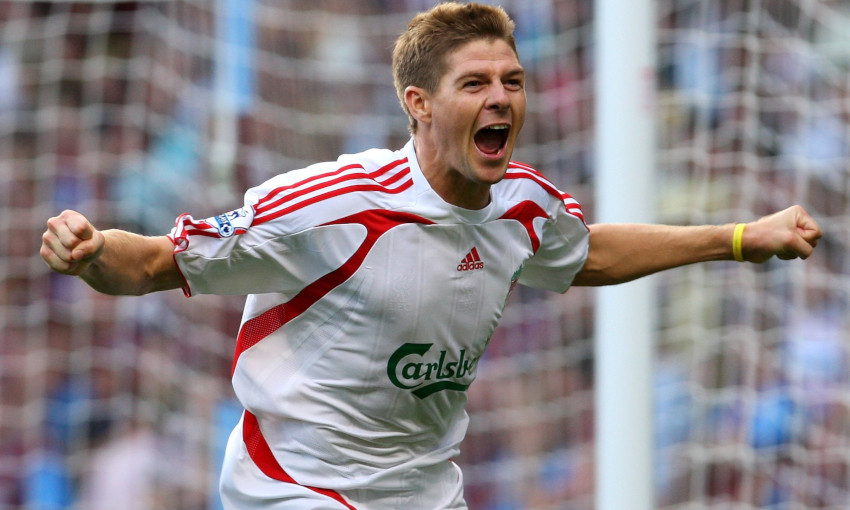 Steven Gerrard scored some truly iconic goals for Liverpool, with a fair few courtesy of his ability as a free-kick specialist.

On this day in 2014, for example, the midfielder hit a memorable set-piece against Sunderland at Anfield.

The anniversary got us thinking, so we’ve picked out 10 of our favourite Gerrard free-kicks for the Reds...

Gerrard scored more goals against Villa than any other team – 13 in total. On the opening day of the 2007-08 season, the game was seemingly heading for a draw at 1-1 after Gareth Barry netted an equaliser with an 86th-minute penalty. A minute later, though, the Reds were awarded a free-kick and up stepped Gerrard, who curled a magnificent right-footed effort from 22 yards out high into the back of the net beyond the reach of Stuart Taylor to win it.

The opening goal in this 3-0 win over Sam Allardyce’s Newcastle United side at St. James’ Park was just sublime. Lucas Leiva rolled the ball square and Gerrard hit an unsavable drive from 25 yards out that gave Shay Given absolutely no chance.

People said Gerrard had dynamite in his shooting boots at times, and Portsmouth must have thought this on a cold December night in 2004. At the Kop end, Dietmar Hamann touched the ball short and the No.8 thumped a shot that roared into the net.

Gerrard netted 10 goals in Merseyside derbies and this strike at the Anfield Road End was as good as any and proved to be his last in this particular fixture. The skipper opened the scoring in the derby with a curling free-kick that Tim Howard could not keep out.

Making his 400th appearance for the club, the captain marked the occasion in style. The Reds took the lead in the seventh minute when John Arne Riise nudged the ball and Gerrard drove an unstoppable hit into the Anfield Road net. Such was the power of the effort, Match of the Day commentator Steve Wilson stated: “That’s travelling about a million miles an hour!”

Hamann rolled the ball short, and with three Everton players diving in, the No.8 placed the ball expertly low into the bottom corner of the Kop net. It was the opening goal of a 2-1 win that saw the Reds forced into three substititions because of injuries in the opening 45 minutes. Milan Baros was sent off in the second half and Luis Garcia hobbled on to continue despite being injured himself.

Gerrard put Kenny Dalglish’s side into the lead at the Kop end with a sublime, right-footed free-kick into the bottom corner of the net that David de Gea could only stand still and admire.

Trailing 1-0 and playing with 10 men following the dismissal of Lazar Markovic, the skipper produced yet again, swinging a perfect free-kick off the inside of the near post from the left edge of the penalty area. The Reds then laid siege to the Basel goal but they could not find the winner they needed and the game ended in a draw.

From a central position on the edge of the box, Gerrard swept a precise free-kick into the top corner of the Anfield Road net to put the Reds on course for the seventh victory in an 11-game Premier League winning run.

Gerrard racked up his 100th goal for Liverpool with another pinpoint strike at the Kop end. Fabio Aurelio rolled the ball short and the No.8 drilled home an unstoppable drive from 25 yards out.