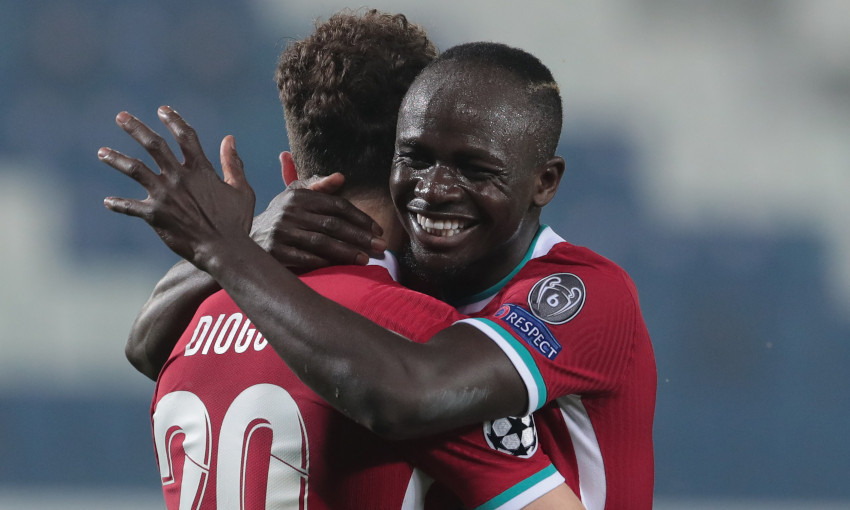 Atalanta scouting report: The lowdown on 'The Goddess'

Diogo Jota's classy hat-trick against Atalanta BC a week ago was the 20th European treble in Liverpool FC history.

The Portugal attacker inspired a 5-0 victory for Jürgen Klopp’s side in the Champions League tie with a trio of sublime finishes.

Alun Evans was the first Liverpool player ever to net a hat-trick in Europe.

His treble came against formidable opposition, too, in the form of a Bayern Munich side containing Franz Beckenbauer, and gave Bill Shankly’s team an insurmountable lead in their Fairs Cup tie.

The 3-0 victory at Anfield was followed by a 1-1 draw in Germany to see the Reds progress, though they were subsequently eliminated by Leeds United in the semi-finals.

That Evans’ landmark feat came on his first start for more than four months due to injury only made the achievement even more impressive.

John Toshack’s hat-trick of headers ensured Liverpool held off the challenge of Hibernian on their first steps towards eventual UEFA Cup glory in 1975-76.

The Welshman hit the target from three right-wing crosses as Bob Paisley’s men won 3-1 at Anfield on the night and 3-2 on aggregate in the tournament’s first round.

His tie-deciding contribution would prove especially valuable when the Reds went on to lift the trophy for the second time in four seasons.

That season’s run to UEFA Cup glory included a second hat-trick on home soil as midfielder Jimmy Case put three past Slask Wroclaw in the third round.

Remarkably, his tally on the night would have been even greater, too, were it not for one effort striking the post and another being chalked off by the referee.

Paisley’s Reds had done more than enough to eliminate the Poles nevertheless – Case’s treble at Anfield adding to a 2-1 away win in the first leg. 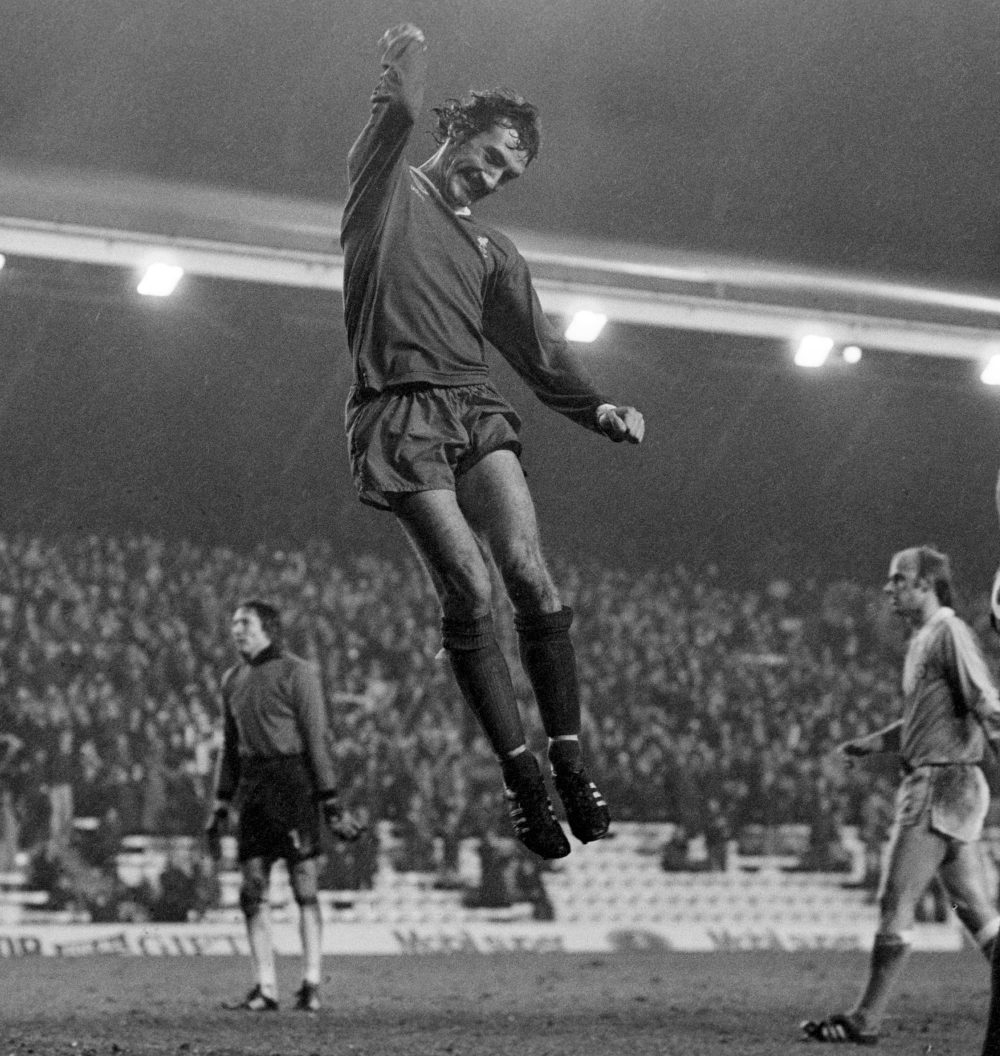 Having scored one of the goals that decided the 1977 European Cup final in Liverpool’s favour and qualified them for the subsequent Super Cup, Terry McDermott then had a big hand in his team lifting that trophy as well.

After a 1-1 away draw with Hamburg – who featured Kevin Keegan following his switch between the clubs earlier in the year – the Reds racked up six unanswered goals in the Anfield return.

McDermott got three of them himself in a 16-minute spell either side of half-time.

And the Scouser repeated the trick a little under three years later with a treble in the 10-1 rout of Oulu Palloseura in L4 that set Liverpool on course to reclaim Old Big Ears in 1980-81.

There were, in fact, two hat-tricks against Oulu Palloseura that night, with Graeme Souness wrapping his up via a 52nd-minute penalty.

The midfielder was it again in the third round of the competition, powering in three strikes from range when Bulgarian champions CSKA Sofia were dispatched 5-1 at Anfield.

Liverpool would, of course, go on to clinch the trophy for the third time in five years and Souness remains the only Red ever to have scored two European Cup trebles in the same season.

John Wark’s first full season with the Reds, 1984-85, saw the Scot plunder an incredible 27 goals in all competitions – more than anyone else in the squad.

That total included no fewer than three hat-tricks during the campaign, with the opener coming in round one of the European Cup against Lech Poznan at Anfield.

Two strikes inside the opening 20 minutes were followed by a third goal from the midfielder on 89, wrapping up a 4-0 win on the night (5-0 on aggregate).

Three weeks later, Ian Rush bagged his first European hat-trick to ensure Joe Fagan’s side overcame the tricky challenge of Benfica in the second round.

The Welshman’s 44th-minute breakthrough in the first leg at Anfield had been cancelled out by the Portuguese visitors early in the second half and Liverpool’s situation grew ever more precarious as time elapsed.

But Rush added two more from close range in the space of five minutes to hand the Reds a vital 3-1 result; defeat by a single goal in the return was therefore sufficient for progression. 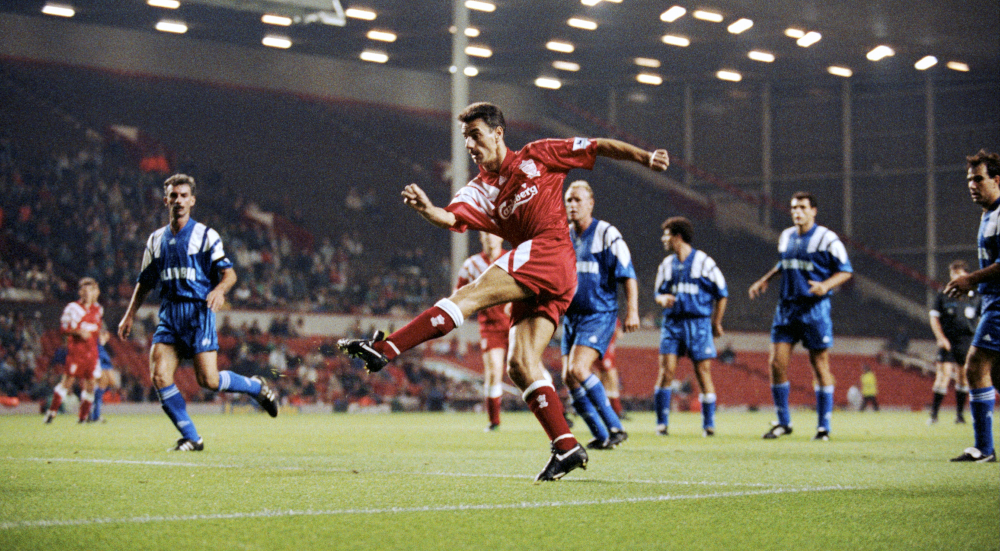 In between those Rush hat-tricks, Dean Saunders racked up a catalogue of goals as Liverpool returned to European football in the UEFA Cup.

He polished a previously underwhelming scoreline against Finnish outfit Kuusysi Lahti with three strikes in the final 12 minutes, making it four for himself and six for his team.

Two rounds later, Saunders stuck three past Swarowski Tirol to ease the Reds into the tournament’s quarter-finals, though their journey would end there at the hands of Genoa.

Two of Michael Owen’s 10 hat-tricks for Liverpool came in the Champions League, with both netted away from home.

The former England international, whose hauls were against FC Haka and Spartak Moscow, is currently still the only Red to have scored two trebles on the road in Europe.

His first was a second-half collection in the 2001 qualifier at Haka, his second the foundation for a 3-1 win over Spartak during the next season’s group stage.

Steven Gerrard’s record haul in European football for the Reds – 41 goals – included trebles in the Champions League and Europa League.

The midfielder fired a hat-trick past TNS when Liverpool began their defence of the European Cup in 2005-06 by navigating three rounds of qualifiers.

He was at it again five years later, coming off the bench to overturn a half-time deficit against Serie A side Napoli in the Europa League at Anfield, Gerrard striking three times in the final 15 minutes.

The legendary Liverpool captain is still the last of the six players to have bagged more than one European treble for the club.

Attacking midfielder Yossi Benayoun made a habit of racking up hat-tricks during his three-year spell on Merseyside, doing so in the Champions League, FA Cup and Premier League.

His first came on the European stage as he chipped in with three of the goals during the 8-0 defeat of Besiktas at Anfield during the 2007-08 group phase.

Benayoun’s treble came in just 24 minutes either side of half-time and the Israel international also provided two assists on the night.

The last of Philippe Coutinho’s European goals for Liverpool arrived as a hat-trick bundle on a night when he wore the captain’s armband at Anfield.

With the Reds requiring a positive result to book a place in the last 16, the Brazilian provided three of the efforts in a 7-0 dismantling of Spartak.

Started with an early spot-kick, Coutinho had wrapped up his treble by the 50th minute to help the club into the knockout rounds – though a move to FC Barcelona the following month meant he would not be part of the run to Kiev.

Sadio Mane became only the second Liverpool player to score a European hat-trick away from home when he bagged three at FC Porto in a Champions League last-16 tie in that 2017-18 campaign.

The Senegalese emulated Owen with a Valentine’s Day treble at Estadio do Dragao that helped Klopp’s charges to an emphatic 5-0 result and eventually a place in the quarter-finals.

Mane went on to net in every round, including the final against Real Madrid, as Liverpool finished runners-up in that season’s tournament.

Having netted the club’s 10,000th goal in all competitions on the previous Champions League matchday, Jota grabbed another milestone at Atalanta.

On his 10th appearance, the summer signing claimed the Reds’ 20th European hat-trick with a sublime exhibition of finishing at Gewiss Stadium last Tuesday night.

A deft dink and a clinical touch-and-blast put Liverpool in control at half-time against the Serie A side, and Jota later sealed his treble by rounding the goalkeeper and tapping in.