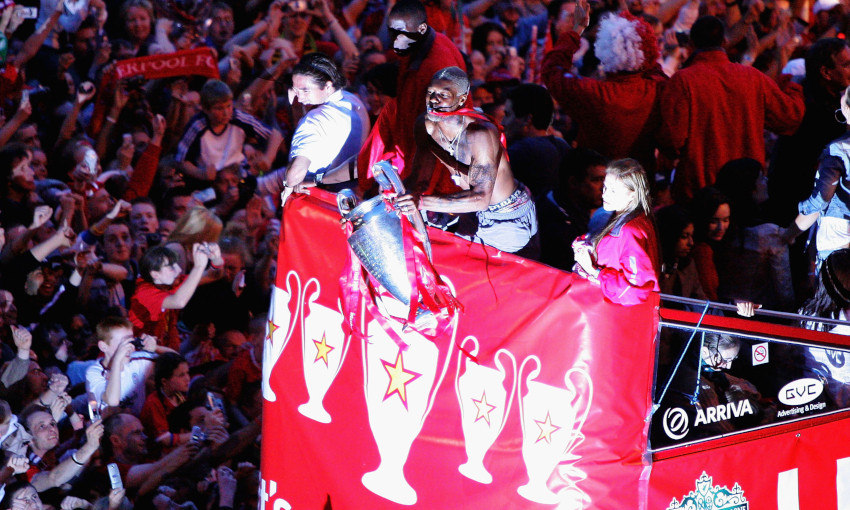 Djibril Cisse still takes immense pride in his achievements with Liverpool and the connection he developed to the club.

The Frenchman joined the Reds from Auxerre in the summer of 2004 but saw his debut season initially ruined when he suffered a broken leg at Blackburn Rovers in the October.

Cisse achieved a full rehabilitation in time to return for the crucial closing weeks of the campaign, however, and would go on to play an influential role in the Champions League triumph under Rafael Benitez.

After coming on as a substitute in the final against AC Milan in Istanbul, the striker coolly converted his penalty as Liverpool won the shootout and lifted the trophy.

His decisive contributions would continue into the 2005-06 season, with Cisse on target twice – again from the bench – to help successfully turn around the UEFA Super Cup tie with CSKA Moscow.

He later started the dramatic FA Cup showpiece against West Ham United and, with Benitez’s side 2-0 down in the early stages, his classy finish kicked off another comeback that ended in a 3-3 draw and victory via penalties.

A second broken leg, sustained on international duty with France, represented a cruel blow to Cisse’s ascendancy and he subsequently moved to Marseille – on loan for 2006-07 before a permanent transfer.

Fourteen years after his last appearance for the Reds, though, his fondness for the club remains significant; his pride as strong as it ever was.

“Yeah, yeah, yeah. I’m not watching every game but I’m watching the results and the timetable,” he told Liverpoolfc.com when asked if he continues to follow the club’s fortunes.

“It’s always important. It’s a part of my career that I’m really proud of, it’s the team that gave me the biggest trophy that every footballer wants.

“I’m proud; I’m proud to be part of the Liverpool family and it’s still my family.”

The 15th anniversary of the Reds’ incredible success in Istanbul arrives later this month.

Trailing 3-0 at half-time to an AC Milan side overflowing with the greatest talents of the era, Benitez’s men hauled themselves level in six frantic second-half minutes and emerged victorious from the pressure of a penalty shootout.

For Cisse, who side-footed in the second Liverpool spot-kick, the feat was unrivalled in his career.

“There were other good moments but by far this is the best because of the whole story,” the 38-year-old reflected.

“And my story is different. I was injured for a big part of the season. I managed to come back quite quickly and I managed to be a part of the team in the quarter-finals, semi-finals and the final.

“It was a dream come true for me. To take the pen and win the cup, you can’t beat that. Maybe to be world champion [with France] but I don’t think there’s a better thing than this.”

The details of Liverpool’s stunning run to European Cup glory in 2005 suggest their win was destined.

Think of Steven Gerrard’s crucial intervention against Olympiacos to drag the Reds out of the group stages; of Eidur Gudjohnsen’s heart-stopping miss in the semi-final at Anfield; of Jerzy Dudek’s inexplicable double-save from Andriy Shevchenko inside the Ataturk.

“It was written,” said Cisse. “You can’t touch so many obstacles like this. It was our year.

“There were a lot of bigger teams with bigger names than us, but the thing is: we had a massive heart. For us, it was a battle every game. And we knew if we didn’t give 100, 250 per cent, the other team had more quality than us – they were better players than us.

“But the thing is, we had hunger and desire to win, and desire to fight for each other. Our heart was bigger and we showed it in the final.”

Explained: How it feels to take a penalty in the European Cup final