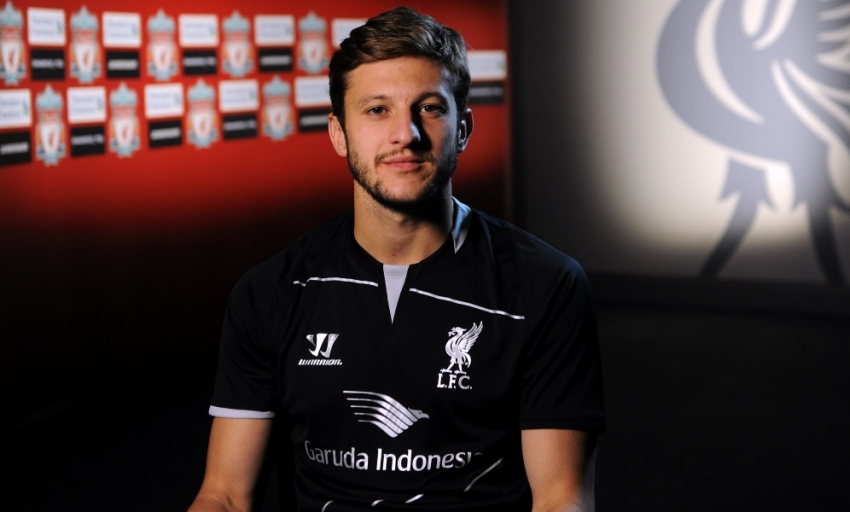 Adam Lallana is anticipating 'a great new chapter' in his outstanding career trajectory after sealing a dream move to Liverpool from Southampton today, and the playmaker has targeted trophies with the Reds.

Days after returning from World Cup duty with England and six of his new Anfield teammates, the 26-year-old midfielder completed the formalities of his switch and signed on the dotted line at Melwood.

He also spoke at length to Liverpoolfc.com, repeatedly explaining how he cannot wait to begin his journey at the club and why the time was right to step up to Champions League football and Barclays Premier League contention.

Lallana shared his conversations with Brendan Rodgers and Rickie Lambert, revealed the thrill of being able to work with Steven Gerrard each day and sent a message to Liverpool supporters.

LFCTV GO subscribers can enjoy the interview with our second summer signing in its entirety by clicking play below. Alternatively, read on for a full transcript of the exclusive chat.

Thank you very much. I'm over the moon for it to be sorted. I still can't quite believe it. I just can't wait to get started in pre-season and work with the team.

Can you describe your emotions right now?

Not really, no, it has not sunk in if I'm being honest. I'd like to thank everyone at Southampton for what they have done for me; I have been there for the best part of 14 years. I'm so excited for the next chapter of my career, coming to a special club like Liverpool. I'm quite humbled and I just can't wait to get started.

After spending so much of your life on the south coast, how big a step is this for you?

It's a huge step. Liverpool have got so much history and after the season they had last season, I can't wait to get started and carry on and build on that. Champions League football is back; everyone is telling me that the atmosphere on Tuesday and Wednesday evenings at Anfield are something special. Lambert is up here already and he has been telling me all about it. It's great that I can continue my career with him as well. That's a special moment.

How much of a help is he going to be now you're both here at Liverpool?

A massive help. I've spent the last four or five years with him. We've had great careers at Southampton and achieved something special, but we're both thoroughly looking forward to the new challenge. It's Rickie's boyhood club and a club I can't wait to be a part of.

Tell us what the thought process is when you find out that Liverpool Football Club are interested in you...

To start off with...if it's true! There had been a lot of toing and froing and it had been a little bit longer than I'd anticipated, but it's something I'm not quite used to. I'm grateful that Southampton accepted the offer in the end and granted my wish to play at such a fantastic football club, in Champions League football and competing for Premier League titles. I'll probably get back started in pre-season within three weeks. I'll have time to chill out with my family, go on holiday and take a break from it for a week or so. Then I'll come back fully focused on the job in hand.

Who was the first person you spoke to about this move?

Probably my dad, my family and my wife. A lot of my close friends are Southampton fans, but they understand. They understand this is an opportunity that you just can't turn down. At the age I'm at, 26 now, it's just the right step. I'm sure most people will understand my decision.

You've had quite a rise in quite a short space of time - you're now a Liverpool player, you're an England international. Does it seem surreal? Does it sink in, how far you've come?

It doesn't yet. To think, five or six years ago, I was playing in League One. But it's a reality that we've climbed up the leagues and done so well. I'd like to think I'm here on merit, I think I've earned it. I just can't wait to keep improving, playing with world-class players and a lot of England teammates as well, which I'm also looking forward to so much. It's going to be a great new chapter in my life.

Do your ambitions as a player change now that you're at a club like this?

They have to - it's a huge club that wants to win titles again and compete in the Champions League. There are different targets to what a club like Southampton has, but I'm just going to be pushing to do the best I can.

What has the manager, Brendan Rodgers, said to you about how he sees you fitting into his Liverpool?

I can't say I've had that chat in detail yet. But from what I have spoken to him, he seems like a top manager. Everyone compliments him massively and gives him great references. All of the lads at England said that if I did get the chance to work with him then it would help my career in huge ways. So I can't wait to get started working with him.

How do you think your style and your game will complement what he already has here at Liverpool?

I hope it complements and I can bring something different to the team. People have said to me that there are similarities in the way Southampton and Liverpool play their football, and I hope that enables me to settle that much easier. I just can't wait to start playing with the world-class players that are here - I'm only going to learn and get better.

Having watched Liverpool from afar and seeing the success Liverpool had last season, how much does that excite you to be part of it going forward?

Watching the run-in towards the end of last season was unbelievable, not just for myself but everyone involved in football. It got the hairs on the back of my neck standing up just watching them, and the style of football they were playing. Deep down, I was thinking to myself: hopefully one day I'll be able to play in that team. That dream has become a reality now, so I can't wait for that to get started.

You were part of one of the few sides to take points from Liverpool at Anfield. What was that experience like?

It was a great afternoon. Southampton weren't expected to get anything from the game. I remember the game quite well; we won 1-0 and a few fans clapped us off the pitch. It shows what respectful fans Liverpool are and how great the fans are. To be playing for Liverpool now, with them behind me, is another reason why I can't wait to get started.

This is a great moment for you, signing for this football club, but we know it has been a difficult few weeks with England in the World Cup. How do you overcome a disappointment like that to ensure you start your Liverpool career well?

Just keep working even harder. We did suffer disappointment; not just myself, all of the lads are disappointed, the whole country is disappointed. We need to rest now for a couple of weeks, recharge the batteries and then get back to doing what we love, that's playing football. Hopefully we'll have learned a lot from the experience and take what positives we can into the European Championship campaign.

Do you become stronger mentally from experiencing something like that?

Without a shadow of a doubt. I think you can only become stronger mentally. It's a long way from home, in different conditions and a lot of people's first major tournament. So it is good experience. We just have to learn quickly and hopefully improve and get better results next time.

You mentioned spending plenty of time with your new Liverpool teammates while you were over in Brazil. Did you ask them questions about this football club and what it's like to be here?

I did and they were on to me about when it was getting sorted. I was running out of answers in the end because I thought the more I say 'soon' the longer it would take. During the World Cup I was fully focused on just playing for England, but I was eager for it to get sorted once I knew I was coming home. Just so I can switch off and rest and recover for a couple of weeks before we start pre-season.

There's no limit to what I can learn playing with him. I grew up watching him. My best mates, he's their legend. For me to be playing alongside him, not just at England but at club level, is quite surreal really. They're always asking me what he's like. He's got that aura around him. But I need to quickly get used to it because I'll be playing with him week in, week out.

You'll make him feel old saying you grew up watching him...

Well, I did, it's just the fact and reality. He's still such a good player and he can go on to play for numerous more years with the quality he possesses.

Your first official game for Liverpool could be against your former club Southampton. What do you anticipate that feeling will be like?

It would have been worse if it was at St Mary's, I'm glad it's at Anfield. But to be lining up against my teammates from last year just had to happen. It's fate. Rickie and I spoke about it, and he said he could have bet his mortgage on it, he knew it was going to happen.

You've experienced Anfield as an opposition player. What will that feeling be like to run out with the home support behind you?

I can't wait to experience it. Everyone says it has got a unique atmosphere; it's a unique ground with a lot of history. I just can't wait to get on the pitch with the fans behind me, rather than just the away fans.

Finally, what is your message to those Liverpool supporters?

Hopefully I can settle in quickly, and I will give it my best throughout the whole time I'm here. I hope I can add something to the team and hopefully we can win trophies while I'm here, because that's why I'm here - for success.