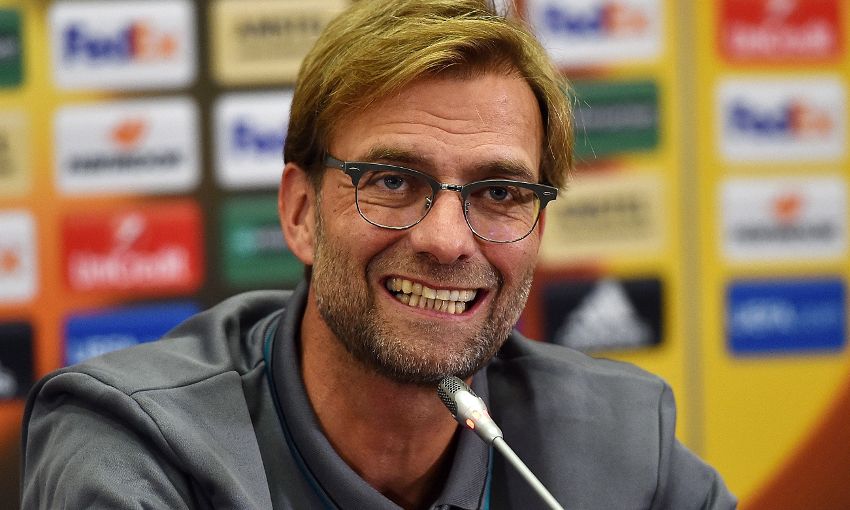 At his pre-Rubin Kazan press conference on Wednesday night in Russia, Jürgen Klopp was asked about the media speculation regarding Steven Gerrard as well as about Thursday's Europa League clash. Here's what he said in full…

What do you think about Thursday’s game and will it be harder for you? And how much harder will it be to play the whole game with 11 versus 11?

It's not always the biggest advantage to play 11 against 10 and Rubin Kazan did well on that evening, of course. As I remember, we had our chances and the best moments from Kazan were for sure in the first half when they were 11 against 11. It's not a problem, it's football. We know that it's pretty hard tomorrow so that's why we are here, that's why for us the Europa League is a very, very big challenge because all of these teams in this tournament have their targets. But we have our targets and that's the only thing I'm interested in.

Tomorrow, is your team going to play with the same line-up and squad as they did against Chelsea or will there be any changes?

I’m sure you would have seen some of the reports about Steven Gerrard today. I’m wondering if you could fill us in on what may or may not happen – will he come back to train with Liverpool? Could there be more for him at the club? What can you say about that?

Yes, I heard about it a few moments ago – one of your colleagues told me. I can say I have had contact with Stevie. We’ve had one phone call and a few messages. Of course, I said the door is always open. Stevie is a legend and it’s clear that if he is here in Liverpool and is young enough and healthy enough to want to train for the next season in LA, then absolutely no problem. That’s clear, but nothing else. He didn’t ask and I don’t have to think about this. He is an LFC legend and our doors are always open.

After the last match against Rubin Kazan, who impressed you from them? Are there any of their players who you’d like to take to your club? And have you had time to look at the city of Kazan?

When I prepare my team for a very important game, like it is tomorrow, I only watch the game and the style of the other team and not a single player, so I don’t think about one player. They have a few young players in the squad that I didn’t know before, but now I know them. I don’t think about this in this moment. We have no time to see the city until now. We landed in the afternoon and we were in the hotel. Now we are here, but we are not here for visiting Kazan and I hope you will see that tomorrow!

When you were Mainz manager you took your team up north to Stockholm in Sweden and didn't take food with you so your players had to get food, fire, all that, just to survive - do you feel the experience helped Mainz and could you do something similar [with Liverpool]?

If we did something similar like this today it would be live on LFCTV! That's one problem, maybe [laughs]. It was good, it was long ago, but it was good, it was the right thing for that team and you shouldn't compare teams. It's another time and part of the problem is you can do this to get a better team but you have to do this without the public and that's not possible anymore. No chance for this.

You once said Borussia Dortmund played ‘heavy metal’ style. What style characterises Liverpool and what style are you aspiring to?

The problem of my life is that I said too many [things] in the past and nobody can forget it! Only I can. We have to work for it and create a new kind of music, maybe. But we are in a good way.

What do you think about the Kazan Arena? How comfortable is it?

It’s very comfortable. The dressing room is much bigger than at Liverpool! I haven’t seen the pitch and that’s the most important thing in the stadium. We have to go out and see how it is and train, then we’ll know more about it. From outside, what we could see when we drove here, it’s very nice.