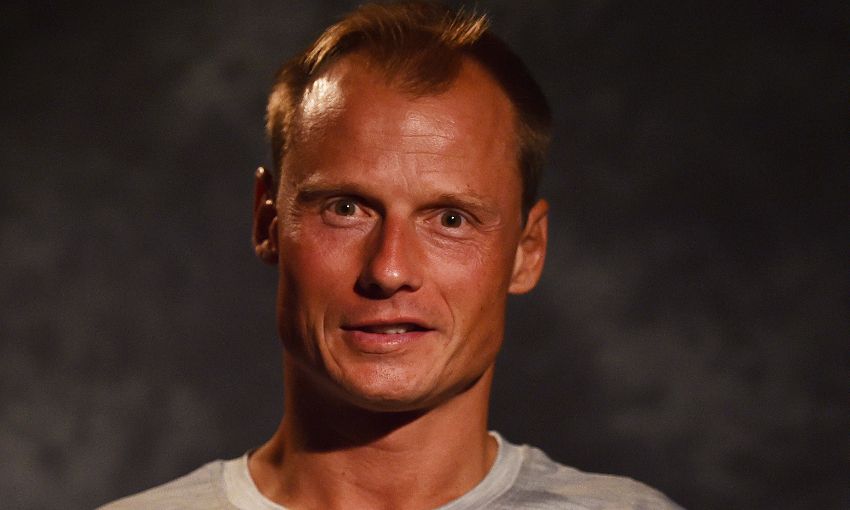 A call from Jürgen Klopp made Alex Manninger’s decision to join Liverpool an easy one – and now the goalkeeper is determined to use his years of experience to the club’s benefit.

The 39-year-old today completed a transfer to the Reds, subject to international clearance, and is part of the travelling squad currently in America on the pre-season tour.

Once the deal was inked, Manninger sat down with Liverpoolfc.com for an exclusive interview in which he explained what he hopes to achieve during his time on Merseyside.

The Austrian also backed Ragnar Klavan, a fellow new arrival and former teammate at FC Augsburg, to show exactly why Klopp swooped to sign the defender earlier this week.

LFCTV GO subscribers can click play on the video below to watch our chat with Manninger in California in full. Alternatively, read on for a transcript.

You have had a very long and distinguished career. Just how much of a surprise was it for you to end up as a Liverpool player?

Honestly, it was a surprise. After these years, in Italy and the last four years in Germany, I hadn’t given up, I hadn’t said ‘that’s it’, I still waited for the phone call. When Liverpool was on the phone, it was a great pleasure for me to take it on because it gives me what I was looking for. This is the moment I was waiting for until the end.

Tell us about the phone call…

It was funny, because after working for 22 years in professional football you have your people around – you know who to talk to and who not to talk to. There was a call from a guy I didn’t know before and it was quite a surprise; he asked if I was interested and I said ‘yes’. He put the phone down and 15 minutes later the boss rang me – Mr Klopp. For me, it was an honour to have this conversation. He told me to have a look, get myself over there and convince myself. He said: ‘we know what you have done in the last 20 years, so you don’t need to show anything.’ It took me half an hour to know. It is an honour to be here.

Everybody will be aware of your career, scaling the heights at clubs like Arsenal and playing back-up to goalkeepers like Gianluigi Buffon. How will this role be different?

The generations are changing. There are more players in the squad and more goalies around. I will definitely be part of the team, that’s my ambition. As much as I can help on the pitch and as much as I can help off the pitch is my focus, to keep an eye on every bit I see or every bit I can do. Always keeping myself in the right shape and helping the other [goalkeepers] or the whole team a couple of per cent would make me happy.

Goalkeepers at this club have always been very tight, the back-up goalkeeper and the No.1. Is that something you can buy into and help with?

At a club like this, there are 25, 26, 27 players all nearly of the same quality. I’ve still got something left, for sure, but obviously it’s probably not the time for me to push for the next three or four years to get a place in the goal. Because time says it’s not possible to play 50 games a year. But if I’m called up, I’m definitely there for games, I will play. And I’ll definitely be in the changing room every game, giving my input; I hope, even if it’s only a couple of per cent, it will do the rest.

How difficult is it to play back-up goalkeeper?

This is [the same] for every player, because you only start with 11 and the other 10, 12, 14 don’t know when they’ll play or if they’ll play. It’s part of the job. It’s a sport unit and you have to keep ready for whenever the boss calls you. This is our job and my job, even if I’m late in years. That probably makes the difference because the goalie who is playing knows I’m not pushing for his shirt, so he will be relaxed about this. But I’m definitely a guy who wants quality around and that is why I’ve chosen this club now, because it has got it. Not only on the pitch, it’s just the perfect way to work or finish a career.

What is your opinion on both of the other Liverpool goalkeepers at the moment?

I know both from last season. I’m with [Loris] Karius now and I have seen a couple of training sessions, and I know him from the last few years in Germany. I knew Simon [Mignolet] already because I followed European football all the time, and we had the game against Liverpool in February in the Europa League. We know each other from the profession of the job we do. They are modern ‘keepers. It will definitely be fun and good work to be on the pitch every day, and to have a coach in John [Achterberg] who is forcing us in the right way and getting out of us the best the club needs.

There’s another player you know very well, a new signing at Liverpool. How do you expect Ragnar Klavan to settle into life here?

It’s just fantastic that he got the chance. He is similar to me – when you are growing up in a small country, you need to leave early if you want to make your way in football. He left Estonia at about 19 and went to Finland and Holland. So he made his way. I’m just glad to play with a player I trust 210 per cent. And I’m happy for him to get the chance at one of the biggest clubs in Europe. This is the right thing he deserved.

How would you describe him as a player? What can Liverpool fans expect from him?

They can expect a player who gives more than 100 per cent. He is a professional, not only on the pitch but he lives football 24 hours. This is what he can do for himself and the club. I would say he is a guarantee in every part of a sportsman.

Tickets are still on sale for Liverpool's International Champions Cup matches with Chelsea and AC Milan. Click here for details on how to buy.

Alternatively, you can watch the matches on LFCTV and LFCTV GO. Click here for information on how to tune in.