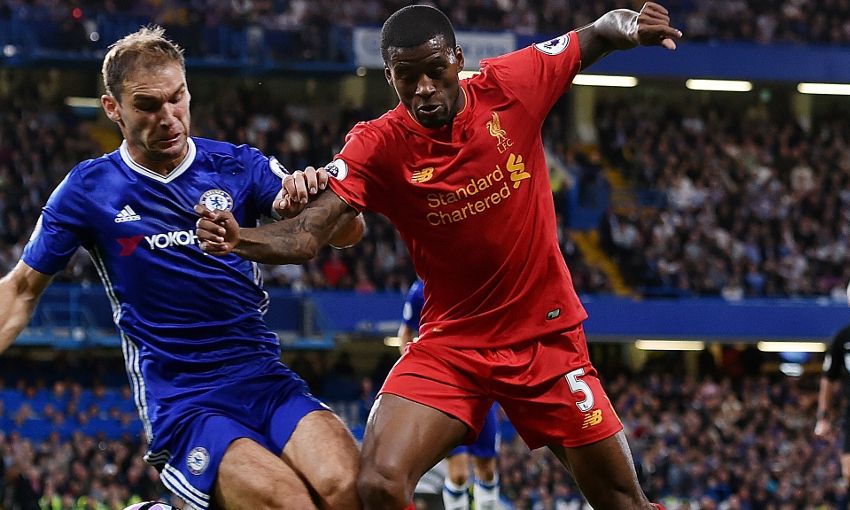 Georginio Wijnaldum has spoken of his pride at wearing the red shirt and revealed why he truly believes manager Jürgen Klopp is building something special at Liverpool.

Since his arrival from Newcastle United in the summer, the Netherlands international has been an ever-present in the Premier League for the Reds.

And after another encouraging display during Friday night's brilliant 2-1 win at Chelsea, Liverpool's No.5 believes the future really is bright for the club under Klopp.

“This is a very talented squad with a great coach,” Wijnaldum told the Liverpool Echo.

“I believe he is building something special here. I got that feeling when I first met with Klopp. I knew this was the right club for me.

“I always had a good feeling about moving to Liverpool and things have gone well so far.

Reflecting on the win at Stamford Bridge, Wijnaldum considered it another statement of intent from Liverpool as they showed what a force they could be this season.

"It was great to celebrate with our fans at the end. The manager congratulated us. He was happy. There were lots of hugs!

“We played a really good first half and scored two good goals.

“In the second half we didn't start so well. We dropped a bit too deep and conceded a goal which made things difficult for us but we saw the game out.

“Our gameplan is always to start on the front foot like that. To dominate our opponent. We try to do that, no matter who we are playing against. That's the way we train and it's what we're good at. It worked well for us against Chelsea.”

After some fine displays so far in midfield, Wijnaldum has now set his sights on claiming his first goal in a red shirt.

“I'm learning game by game and I think I'll continue to get better,” he said.

“I hope the goals will come soon. I'm trying to get in the positions to score.

“I just need a bit of luck with the ball dropping to me but the most important thing is that the team keeps winning. If that happens I'll be happy.

“Of course I want to score. I've always scored through the years, no matter who I've played for. But I'm happy when I can do a good job for the team like against Chelsea.”

The No.5 also spoke about his role in the team and why it's a different position to the one he filled in the black and white of Newcastle United.

“It's difficult to compare my role here to the one I played at Newcastle,” he added.

“Towards the end at Newcastle I was playing on the left side. At the beginning I was playing as the No 10. I was almost the only midfielder in front of the goal behind the strikers.

“This is a different style of playing. In this style you need to look to each other. Sometimes when the other two in midfield are going towards the box, you need to stay.

“If [James] Milner goes forward, I have to stay, so you need to look to each other. At Newcastle I didn't have to look because I always had people behind me. I could go to the ball every time.

“I have faith in the way we are playing. I'm enjoying it.”

The Reds now turn their attentions to Tuesday night's EFL Cup third-round tie with Derby County, before returning to Premier League duties next Saturday when they welcome Hull City to Anfield.

Wijnaldum insists it's important that Klopp's charges keep up their momentum and not let their high standards drop.

“It's difficult to say at this stage what we can achieve this season,” he added.

“We've had some great results but it's still early and the season is long. We have to take it game by game and keep performing.

“We all want to achieve great things but we can't afford to look too far ahead. Every situation is different and we need to adapt to that.

“Every game in the Premier League is difficult. You can't ease off. We need to maintain this level.”