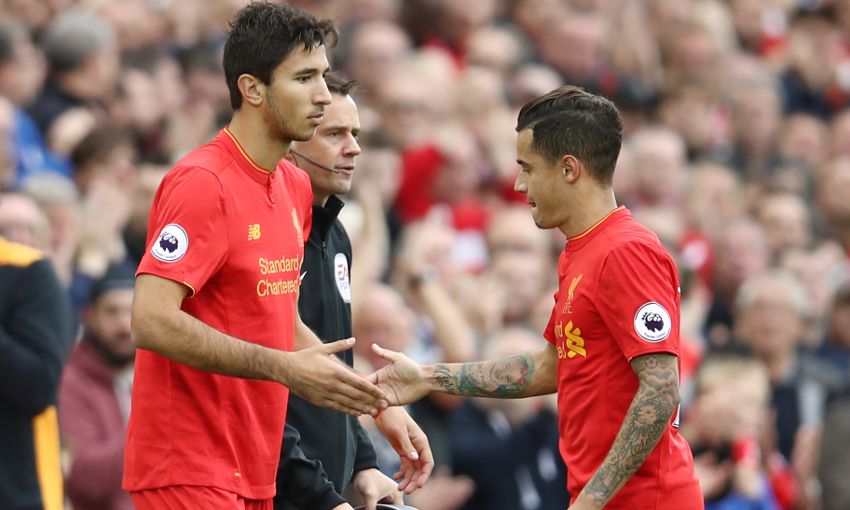 Klopp: Reds will keep sharing out the goals this term

Marko Grujic had studied videos of the Anfield atmosphere before signing for Liverpool – and the midfielder was not disappointed when he experienced it for real for the first time.

The 20-year-old made his home bow on Saturday afternoon as a second-half substitute during the 5-1 victory over Hull City and clocked up a quarter of an hour in front of his new supporters.

It followed his maiden competitive start for the club at Derby County in the EFL Cup tie earlier that week, when Grujic received praise for his display from Jürgen Klopp.

The No.16 was suitably thrilled by the chance to run out at Anfield and plans to work as hard as possible to earn more opportunities to do so this season.

“Every player and the people in the stadium enjoyed the game,” he told Liverpoolfc.com.

“It’s interesting when you come on from the bench, it’s a nice feeling. It was my first game at Anfield and the feeling was incredible.

“I heard [about the atmosphere] and watched some games before I signed. I made my competitive debut against Derby in the cup and then came on at Anfield. The feeling is nice. I will try to keep working hard.”

Grujic continued: “It was a nice game for everyone. We played very well and scored three goals in the first half, and then we continued the same in the second half.

“But we conceded one goal and we will try to improve on those moments from set-pieces. That’s what we can improve.

“The game was very good and I was happy to get some more minutes, it’s nice to be part of it.”

The summer arrival, who was initially signed back in January from Red Star Belgrade, faces strong competition for playing time in a midfield role.

It is a scenario he understands and one he is approaching with a mature and professional mentality.

“All of the players in my position, and other positions, are playing very well,” said Grujic.

“We have had good results to start the season. We had some hard matches away. We will be better from week to week – that’s the most important thing.

“I will try to show my skills in training to get more minutes in the Premier League.”