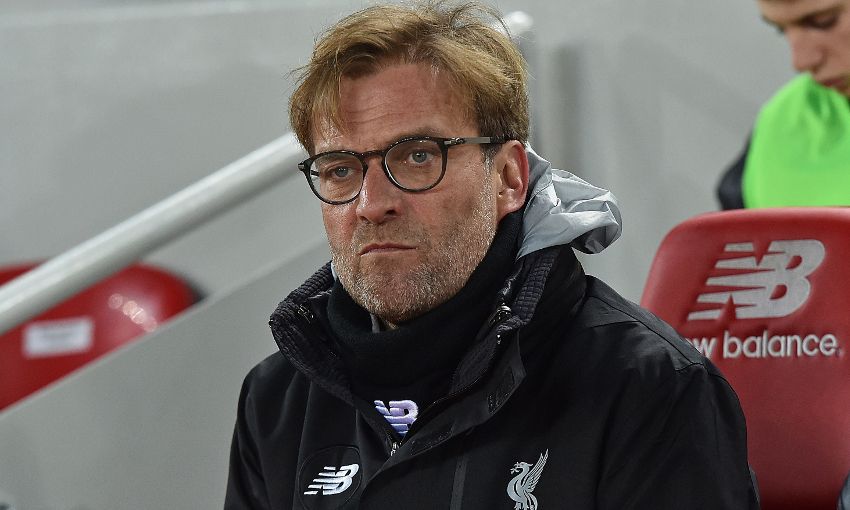 Jürgen Klopp expressed his disappointment after Liverpool's hopes of EFL Cup success were ended by a 1-0 defeat to Southampton at Anfield on Wednesday night, but felt his side had created the chances to overturn the first-leg deficit prior to the visitors' last-gasp decider.

The Reds exited the competition at the semi-final stage as Shane Long’s stoppage-time strike added to the one-goal advantage the Saints secured in the first meeting at St Mary’s and ultimately sent them into the Wembley final next month.

Nevertheless, Klopp insisted there were positives to look upon from his side’s overall performance on the night - in which Emre Can and Daniel Sturridge both went close to netting in the second period - though he acknowledged his frustration at the final outcome.

Read on for a transcript of the manager’s post-match press conference.

On his reaction to Liverpool’s defeat and elimination…

I’m disappointed, there’s big disappointment. First of all, big congratulations to Southampton – they won both legs so deserve to go to the final, but I think especially in the game tonight we could have won [the tie], that’s why I am disappointed. First half, it was difficult – the wind was really strange, it was difficult to handle. You saw one or two balls when the ball stopped in a moment when nobody knew about it. That was difficult for a football-playing side. The plan of Southampton was counter-attacking, which they did really well. In the first half, one or two counter-attacks could have been defended better and we should not be in one-on-one situations with Redmond, but all the rest was good play of Southampton.

In the second half we did it much better, we played football and one or two better passes in the right spaces [meant] we created outstanding chances. Against a side like Southampton playing like this, creating these big chances is really difficult but we did it. We all know, usually we score in situations like this, but we didn’t and that’s what we have to accept. It doesn’t say anything about the performance, it only says everything about the result.

We are out and we have to accept it. For me as a coach, it is very important to know about the performance and I will not ignore this, but in this moment I am of course disappointed because we would have deserved to win the game tonight. If this would have been enough [to go through to the final], I have no idea. We have to congratulate Southampton and we wish them all the best.

On Liverpool’s performance on the night…

The performance was absolutely OK – we created the chances. Now everybody wants to say, ‘but you didn’t score’ and that’s right, absolutely right. But for me as a coach, it is very important the way we choose to create chances and that was absolutely OK. The first half was not bad, but it was quite a test, similar to Swansea – dominant, dominant, dominant but no goal. We didn’t lose our nerve,we stuck to our usual plan, did a little bit better in one or two moments [in the second half] and immediately we had bigger chances. That was good, but in the end we are out and lost both legs, and I think nobody will talk about this for a long time. For us, the performance is really important and I am fine with this, but I would actually like to be speaking about planning the final and not the performance. We are on the wrong side of the semi-final.

For me as a coach it’s not that difficult because we have other situations – you can win the ball back and different things. We are not the only team in the world that has to do this. Not every team is playing like this [against Liverpool] but quite a lot, we spoke about it – 70, 80 per cent of the games are like this, we knew it before so it’s not a problem. But we still adapt to it, 100 per cent. We did it. You have to score in this or that situation then the game changes a little bit, not against each team, but a few teams are happy with only being 1-0 down or whatever.

We don’t have to think about this, it’s the most difficult thing in football but we are not the only team who has to accept this. We are a good football-playing side. Southampton usually play completely differently. If they always played like this they would probably have a few points more because their counter-attacking was really good, and defending with a little bit of luck.

Creating chances against a team like this, that’s really not easy but we did it so that’s good, and then you have to score. That’s all. It didn’t happen tonight, but that’s not a problem in general, it’s only a problem for tonight.

No, absolutely not. Absolutely not. I said something like this a second ago [in another interview], if we would doubt the way we are after these little, little problems we’ve had now, it would really be a strange thing. We are absolutely in the situation – we don’t have the points we want, that’s not the problem, that’s how it is. We know what we want to do, we know what we have to do and we know about the football we want to play, so that’s all good. There are times it didn’t happen, but tonight it was a really good performance in difficult circumstances. I said a few times when I came here about the wind and everybody was laughing, but today was really difficult, really difficult to play football with this wind. I am fine with this [performance] but disappointed about being out.

The two sides made a big statement – the club and Phil. A player who obviously everybody in the world would like to have in their team says, in this situation, that he wants to stay here. For us, that’s unbelievably important. He is not the only player we want to keep! But you write more about it than we can say about it, that everybody wanted him and whatever, and that was obviously true because nobody in football is that blind that you cannot see how big his qualities are. We will carry on in this way with the players we want to keep and all that stuff, and that will happen in the next few months and years, because the base is really good here and so Phil is the first to show that he thinks the same.