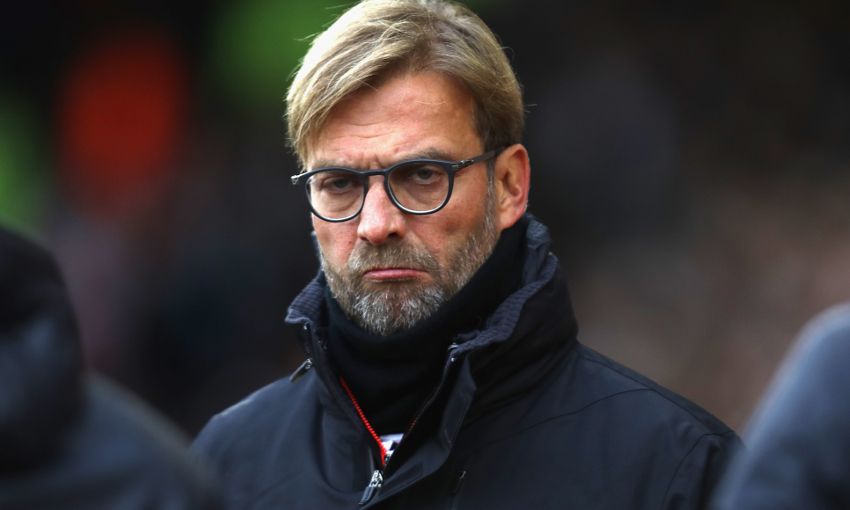 Jürgen Klopp assessed the offensive threats of Crystal Palace and how Sunday's opponents will be affected by the absence of Mamadou Sakho as he previewed the Anfield clash today.

The Reds host the Eagles this weekend with the objective of extending a seven-match unbeaten run in the Premier League and maintaining their course for a Champions League qualification spot.

Palace will journey to Merseyside on the back of an impressive run of their own, having won five of the past seven games – including a notable success at Stamford Bridge earlier this month and a home victory over Arsenal.

Klopp believes Sam Allardyce possesses one of the most potent attacking set-ups in the division and explained at his pre-match press conference why focusing too much on former Liverpool striker Christian Benteke would be a mistake.

“He’s not 100 per cent to defend,” said the boss. “When the ball is in the air, he is the major and main threat because that’s unbelievable – we felt it a lot of times here when we trained together.

“He has scored 13 or 14 goals for Crystal Palace now. He is obviously another player with confidence, in a good run and all that stuff. Like it is always when you play against Zlatan [Ibrahimovic], other strikers, these kinds of strikers – tall, good with their back to the goal – you have to avoid the crosses and you have to avoid the passes. That’s how it works.

“If we let them cross 50 balls it’s pretty likely he will have a few dangerous headers. That’s not his only strength, of course, but that’s a real strength.

“How it always is, you have to avoid passes in this area, and not only for him, because if you are only concentrated on Christian then [Wilfried] Zaha and [Andros] Townsend are around you.

“That’s really one of the best offensive lines in the Premier League. We respect this. We know how to play against it, but nevertheless we have to show it.”

Liverpool have dug deep in each of their past two matches, battling back to secure a 2-1 victory at Stoke City before Roberto Firmino’s header and a diligent defensive display downed West Bromwich Albion 1-0.

“I told the boys it looked like adult football,” the German commented.

“At the start of the season we were this kind of exciting team, fluent, running everywhere, looks like without a plan but having a plan, being really fluent and flexible and a danger for all defensive lines.

“But you cannot compare these two games. In Stoke, it was a difficult first half. In West Brom, we could build on the first half, even when it was not our best football, because – as I said after the game – the timing and movement was not good enough to be better.

“But already in this half we had two really big chances, with Roberto and Phil I think. We all know it’s not easy to create 10 chances in 45 minutes against West Brom, because they are too experienced, too good, too well organised and that will not happen.

“Scoring this goal was fantastic and then building on the first half in the second half, improving in the game and learning from the first half was the best thing to see in this game, it was really good.

“Games like this cannot be, it’s really rare, your best game of the season because of the style and quality of the opponent. Against West Brom, everybody knows it’s one of the most difficult games to play in the year. That’s how it felt after the game – it was a really good feeling in the dressing room. The boys were really happy about it and it was deserved.

“That’s good, but it’s already four or five days ago, so the next challenge, the next opportunity, is Crystal Palace.”

On-loan Sakho is ineligible for Sunday’s contest against his parent club, prompting a question to Klopp on how much the Eagles will miss the centre-back.

“Mama is a very good defender, especially when you really defend deep, as Crystal Palace are doing often,” he replied.

“He’s a strong boy and all that stuff, good tackles, good blocks. Having a player like him in the team is really good, and obviously apart from this he is a good football player – in build-up he is a cool guy. That helps Crystal Palace, of course.

“They’ve played together now for, I’m not sure, five, six, seven games or something. Having him not involved of course is not the best news for Crystal Palace, but that’s how it is.”