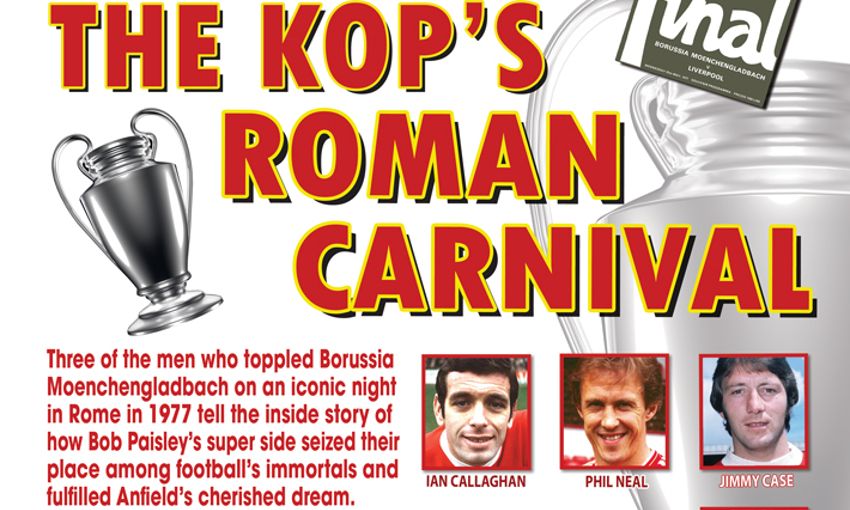 Lucas: Top-four place is in our hands - let's finish the job

A special stage show to commemorate the 40th anniversary of Liverpool winning the European Cup for the first time, featuring three of the stars who played a key role on the night, is coming to the Floral Pavilion in New Brighton on Friday May 26.

Their stories are backed by exclusive audio clips and rolling images of significant moments leading to the conquest of Borussia Moenchengladbach in Rome on May 25, 1977 that finally brought the trophy to Anfield.

Also at the New Brighton venue this coming Thursday (May 18), John will be joined on stage by the man who starred in goal for Liverpool in Rome, the great Ray Clemence, and his fellow Merseyside legend and former England teammate Bob Latchford for 'An Audience With Clem & Latch'.

Ray and Bob, Mersey derby foes in the 1970s and early 1980s, are reunited as they face big personal landmarks.

June marks the 50th anniversary of Ray’s £18,000 signing from Scunthorpe by Bill Shankly in 1967, which set him off on a career of Anfield achievement that earned him acclaim as Liverpool’s finest ever goalkeeper.

Bob, who moved to Goodison from Birmingham for a then-British record £350,000 in 1974, heads towards the 40th anniversary of his much-heralded 30-league-goal campaign of 1977-78, which helped him amass a career total of 138 Everton goals as the third highest scorer in the club’s history.

Tickets for both shows (£20 with £17 concessions) are available in person from Floral Pavilion box office or by calling 0151 666 0000, and also online at www.floralpavilion.com.

Keith has also written a book to coincide with the 40th anniversary of Rome ’77.

His souvenir publication 'Reykjavik to Rome' tells the inside story of Liverpool’s quest to become champions of Europe, which began in 1964 under Shankly and had a glorious climax 13 years later when Paisley’s side toppled Borussia Moenchengladbach 3-1 at Rome’s Stadio Olimpico.

The 52-page book contains some fascinating images relating to Liverpool’s games on that journey which include their three-match marathon with Cologne, their bittersweet meetings with world club champions Inter Milan, and their brush with rising European power Ajax and their young star Johan Cruyff.

“I was present at Liverpool’s first home game in Europe against Reykjavik of Iceland and reported on the Rome win for the Daily Express and I felt the story of what happened in the years between must be recorded in a book,” said John.

“It’s not just about the great games and spectacular goals but also the human, offbeat and funny stories that happened along the way.”

It is also available on mail order at £9.50 including package and posting by calling 07773 715666 or emailing john.s.keith@hotmail.co.uk.