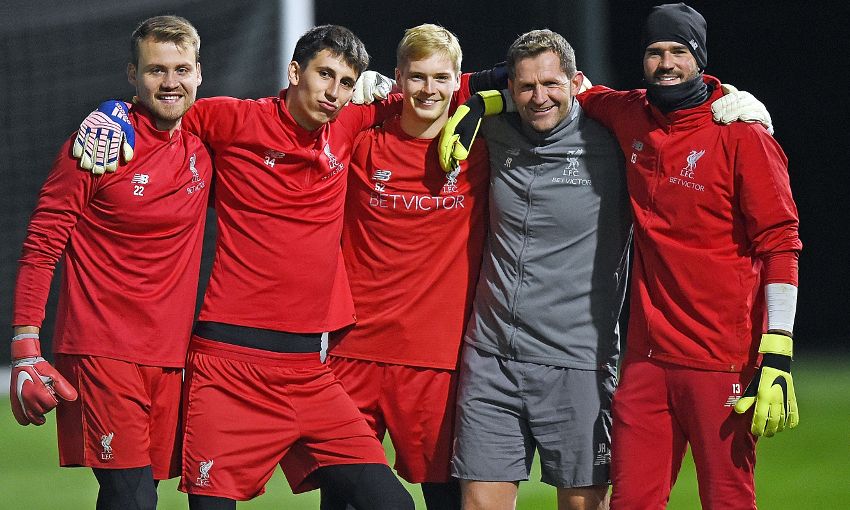 Alisson Becker's working relationship with John Achterberg and his fellow goalkeepers has enabled him to flourish at the club.

The Brazil international has now recorded eight clean sheets in his 16 appearances for Liverpool since completing a transfer from AS Roma in the summer.

The challenges that come with switching to a new league, a new country and with a new language are well documented, though Alisson has met them with poise.

But, by his own admission, that smooth transition is not all his doing.

The No.13 is grateful for the constructive support and advice he receives from first-team goalkeeping coach Achterberg and the other stoppers at Melwood.

“John has proved to be not just a great goalkeeping coach but a great guy, a great person. Since I arrived I’ve noticed he’s loved by all here.

“He leaves me very calm and relaxed on a day-to-day basis and we learn from each other’s work. I’ve pointed out some areas that contribute to his work and likewise he has helped me with things I can improve in on the pitch.

“I believe the relationship between a goalkeeper and the goalkeeping coach needs to be an exchange, with a great deal of trust, and we have been developing this as a team, training together, and I’m getting on great with the other ‘keepers.

“Kamil [Grabara] and Caoimhin [Kelleher] are players with great potential. I learn from them on the pitch as well.

“And of course there’s Simon [Mignolet], who has been at Liverpool a long time and a long time in the Premier League. He has been helping me a great deal in the day-to-day training and in games.

“They have all shown themselves to be great guys, great people.”

Watch: Behind the scenes at LFC goalkeeper training

Alisson’s shutout against Fulham last weekend moved him level with compatriot Ederson of Manchester City as the clean sheet leaders in the Premier League on seven this season.

Chelsea’s Kepa Arrizabalaga sits one behind the Brazil duo, with a further six stoppers grouped together on four.

Liverpool’s man between the posts considers the standard of goalkeeping around the division to be motivational – particularly given the onus on him as a recent arrival.

“Definitely – the competition incites us to work harder,” said Alisson, a nominee for the 2018 Ballon d’Or.

“The competition between goalkeepers is healthy; we’ll see at the end of the season who has helped their team the most. This benefits the clubs and the Premier League.

“Every week of games we see wonderful saves by great goalkeepers and I believe I’m the new boy among them so I’ve got a lot to prove in the Premier League. I’ll continue working hard to demonstrate my potential on the pitch, contributing to a winning team.”