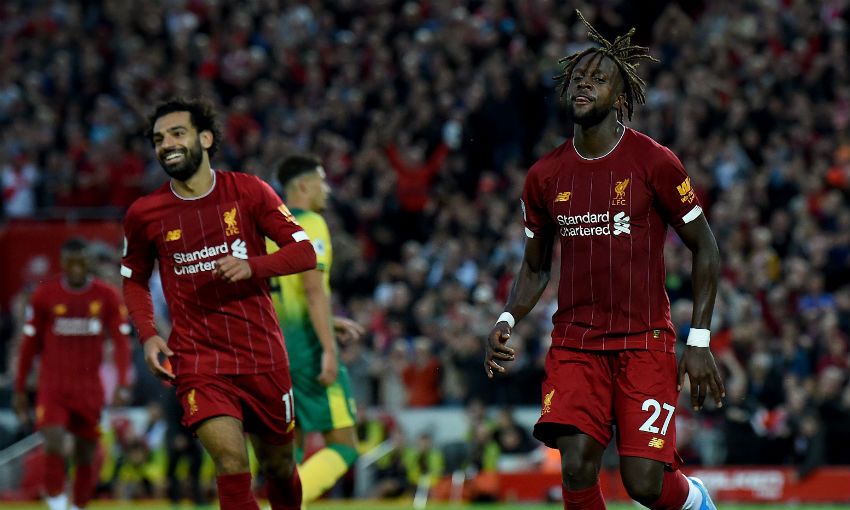 Divock Origi was delighted with the way he and his Liverpool teammates carried the momentum of last season into Friday night's Premier League opener with Norwich City.

The champions of Europe started their 2019-20 domestic action with a resounding 4-1 victory over the top-flight newcomers at Anfield.

Origi, a goalscorer during the Champions League final triumph over Tottenham Hotspur back in June, was again on the scoresheet when he netted the Reds' fourth after a Grant Hanley own goal and efforts from Mohamed Salah and Virgil van Dijk.

Speaking to Liverpoolfc.com shortly after the final whistle, the No.27 said: "It was very important for us to continue the good work that we did in the pre-season and also from last year.

"As a first game, we wanted to make another step from the game against [Manchester] City and obviously winning 4-1 against a very good team is good for us.

"I think there's a lot of good elements, some elements where we can still improve. But it's still the start of the season, so I think it's very positive.

"We had a lot of respect for this team and we knew that if we didn't play at 100 per cent we could have problems.

"You could see in some instances that they had a lot of quality but I thought we dealt with it well. In the end, 4-1 is a very good performance for us."

The next opportunity to secure a piece of silverware arrives on Wednesday when Liverpool contest the UEFA Super Cup with Chelsea in Istanbul.

"I think there's something special going on," Origi continued. "Last year we could finish the season off with a cup and that was good for us.

"But now we have to make the next step. Also in the Premier League, we have a lot to play for, a lot of prizes to play for this season.

"I think we have a very good group and we're all very motivated."