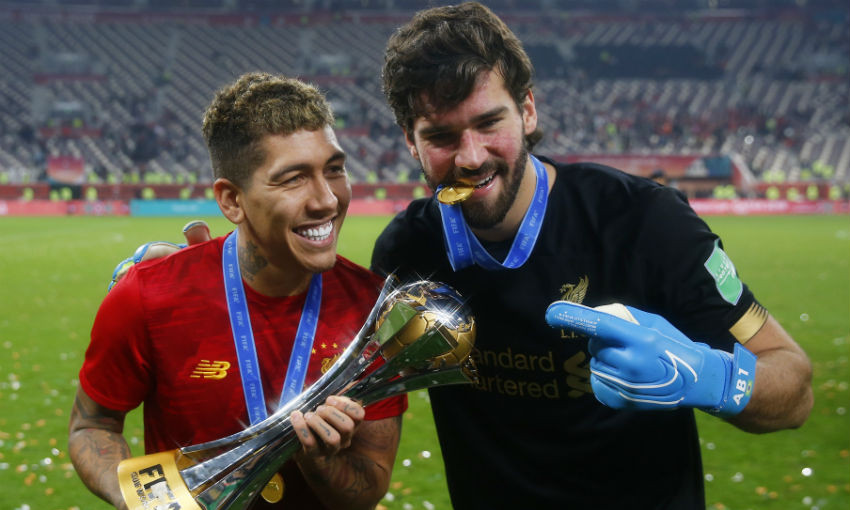 Liverpool to face Shrewsbury Town in the FA Cup fourth round

Alisson Becker has offered some insight into his close relationship with Roberto Firmino and expressed his gratitude to play alongside the No.9.

Firmino's opinion was one the goalkeeper sought when his transfer to Liverpool from AS Roma was in the works during the summer of 2018.

And since Alisson arrived on Merseyside, the Brazilian pair have been able to further strengthen their bond on and off the pitch.

"We then became teammates in the national team and we interacted a lot more during call-ups, at games and preparing for games.

"Then the opportunity to come to Liverpool came about and he was a very important influence in my choice. He spoke highly of the club, he spoke about the reality at the club and arriving here I could see it all to be true.

"Our families have become close as well, this is great for us. He's a similar guy to me, he's laid back and manages to be even more shy than me.

The duo have been important figures in Liverpool's record-breaking start to the 2019-20 campaign as they sit 14 points clear at the top of the Premier League after 21 matches played.

Alisson puts such consistency down to the level of training at Melwood and the mentality possessed by every member of Jürgen Klopp's squad.

"With a lot of hard work," the 27-year-old reasons. "We are a very strong team mentally.

"This is important to maintain this high level even across so many games.

"Our squad is very strong both in quantity and quality. So when one comes out of the team and another comes in, the level of the team doesn't change.

"This is important for a team that wants to achieve great things in football and it has helped us a lot."

He continued: "We're a team that have been together for a long time and getting better each season, taking it up a level each season.

"I think the difference from last season, which was already a victorious season, is consistency. Defensive and offensive consistency, and a consistent mentality.

"Our team have a winning mindset. We always think about the next game, we don't look too far ahead.

"We focus upon what is within reach at the time and we do everything possible to make sure we leave the pitch with a win and this has contributed to the great results this season."