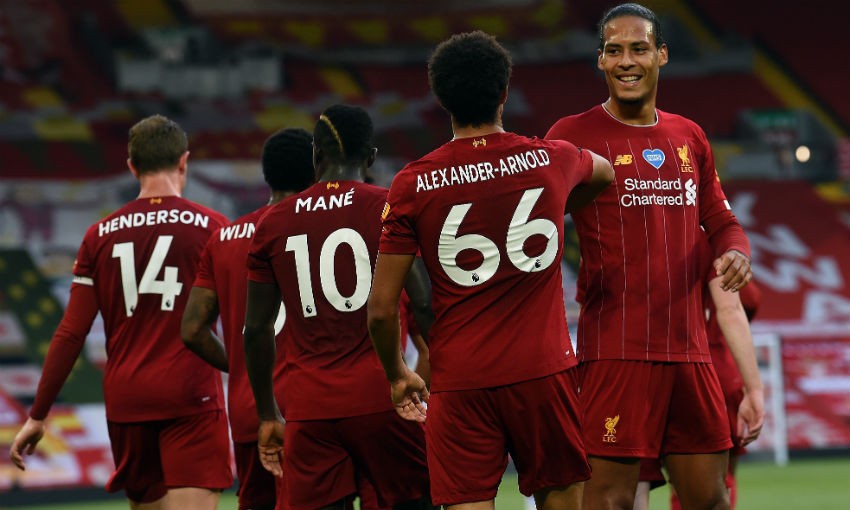 Liverpool produced an irresistible performance to beat Crystal Palace 4-0 at Anfield on Wednesday.

Trent Alexander-Arnold kick-started a display described by Jürgen Klopp as ‘exceptional’ with a stunning free-kick, with Mohamed Salah’s clinical finish doubling the Reds’ lead before half-time.

Fabinho’s long-range missile then made it 3-0, before Sadio Mane rounded off a sublime team move to take the Reds within touching distance of the Premier League title.

A new level of domination

“You should not underestimate how much this team wants it. You should not,” a proud, satisfied Klopp said, after watching his side reel off a 23rd consecutive top-flight win at home.

That statement from the boss came after he’d been informed of a quirky, yet unique and awe-inspiring, stat.

0 - Crystal Palace failed to record a single touch in the opposition box against Liverpool, the first side to do so… https://t.co/gbhTdZ1DD4

Throughout the 90 minutes, Palace failed to record a single touch of the ball in Liverpool’s penalty area - the first time that has ever been the case in a Premier League fixture, since Opta began compiling such full data in 2008-09.

Salah’s fine finish shortly before the break took Liverpool’s goal total for the campaign to 100.

Klopp’s side have now hit the century mark for three consecutive seasons; the first time the Reds have done so since 1986-87.

Fabinho and Mane’s strikes took the tally to 102 and, with seven games remaining, can Liverpool go on and top last term’s haul of 115?

Fabinho marked his 50th Premier League appearance for the club in style.

The Brazilian’s goal was, of course, the highlight of a commanding, all-round midfield display, but his delicate pass to spring Salah in behind Palace’s backline for the Reds' second was a thing of beauty too.

He led the way for Liverpool in terms of tackles (six) and interceptions (three), while only Joe Gomez could match a total of 12 duels throughout the contest.

Superb distribution was also in evidence during a Man of the Match performance, with 92 of Fabinho’s 94 passes finding their target (a completion rate of 97.9 per cent).

In his first 50 Premier League games, the No.3 enjoyed 41 victories: only four players (Aymeric Laporte, Ederson, Didier Drogba and Arjen Robben) can boast a better win total during their opening half-century in the division.

Super Sadio, the scourge of Palace

The forward has now netted in six successive appearances against the Eagles - the 10th player in Premier League history to accomplish that feat versus a particular opponent; an exclusive list that also includes Salah (who has done so against Bournemouth).

Overall, Mane has registered nine goals in 11 top-flight meetings with Palace and is now just one short of reaching 20 for the season for a third campaign in a row.

Buzzing to have made my premier league debut tonight but more importantly to get the 3pts lads we’re class🔥… https://t.co/IvbmCysUZQ

“I’d say that from when you’re a little kid you dream of making a Premier League debut, so for me to make it this season would be another massive achievement,” Neco Williams told us last week.

Well, the teenage full-back need dream no longer after his all-action cameo off the bench on Wednesday night.

Williams replaced Alexander-Arnold with a little over 15 minutes remaining and immediately imposed himself on the game.

The Wales U19 international enjoyed 35 touches of the ball, let fly with two fierce on-target shots and threaded a perfectly weighted pass into Salah’s path in the inside-right channel.

It was, in short, a performance that suggests Williams’ first Premier League appearance for Liverpool will certainly not be his last.