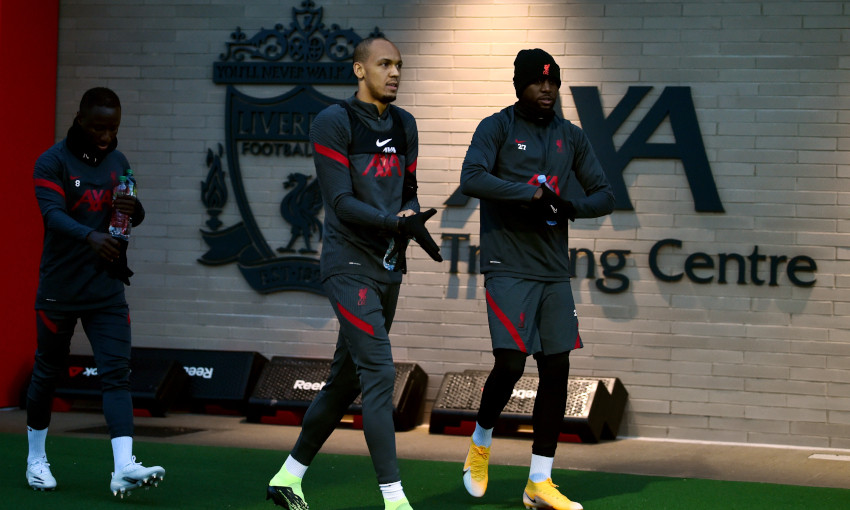 Mohamed Salah wins LFC Goal of the Month for October

Liverpool have been boosted by Fabinho's return to team training ahead of the Premier League clash with Leicester City, but will be without Jordan Henderson on Sunday.

Fabinho, who missed the Reds’ last three matches before the international break, re-joined the squad’s sessions at the AXA Training Centre this week.

“What we make of that, we will see because I don’t know yet how he reacts and all that stuff,” explained Jürgen Klopp during his media previews.

Having withdrawn from the England squad on Monday due to tightness felt in the first half of their meeting with Belgium the previous evening, Henderson is out of contention for the visit of the Foxes.

Trent Alexander-Arnold also remains sidelined with the injury he sustained against Manchester City last time out in the top flight.

Liverpool are assessing the condition of midfielders Thiago Alcantara and Alex Oxlade-Chamberlain, meanwhile, as they continue to recover from injuries.

“Hendo not [available] and Trent not, that’s clear. All the rest we will see,” said Klopp. “They are in a good way, Ox [is] in a good way. They are all closer but we will see if it is close enough for the weekend.”

On Mohamed Salah’s availability, the boss added on Friday: “He is probably back today, that’s all I’ve heard.

“We are obviously in close contact with him all of the time and, how it always is in these cases, in the moment when you have a negative [COVID-19] test then the process really starts. He’s in a good place, he feels well, no symptoms, so that is all fine.”

Joe Gomez has joined Virgil van Dijk as a long-term absentee following the surgery he required to repair a tendon in his left knee earlier this month.

Georginio Wijnaldum will bring up the landmark of 200 appearances for Liverpool if he features against Brendan Rodgers’ Leicester.

The former Reds boss reported largely positive news regarding his squad’s fitness, with several players nearing a return for the Foxes.

Rodgers said: “Ricardo’s in training with the group, which is great news, and he’ll most probably play in a reserve game next week. He’s progressing really well.

“Wilf is out on the field. He still has a number of weeks to go, but he’s progressing well. Soyuncu, likewise, is maybe a few weeks away, but training with the squad.

“Timothy Castagne’s back in again, which is great news, and Wesley Fofana will be fine, so we’re slowly starting to get our players back.”