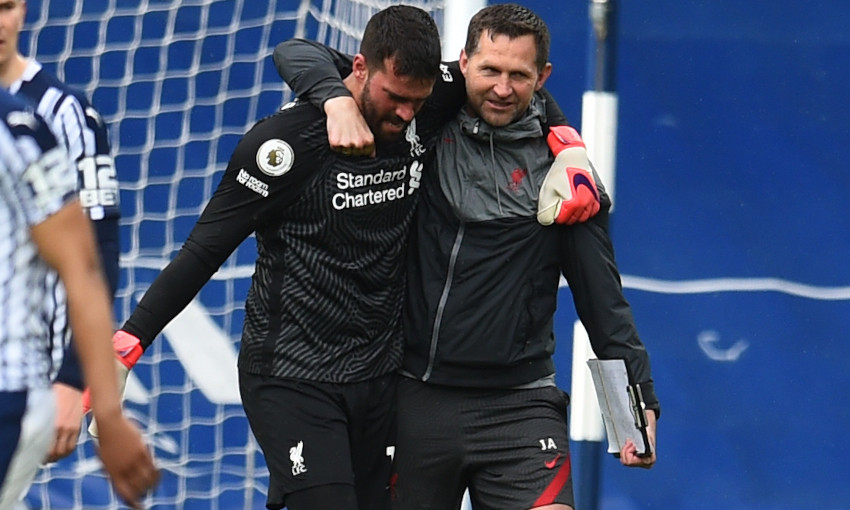 John Achterberg has revealed how a glance at his watch prompted him to urge Alisson Becker to go up for the corner that led to the remarkable winning goal at West Bromwich Albion on Sunday, with the coach admitting: ‘We had nothing to lose.’

The ‘keeper joined his outfield teammates in the box for Trent Alexander-Arnold’s set-piece, with the hosts holding the Reds at 1-1 at The Hawthorns.

However, in quite incredible scenes, it was Alisson who connected with the delivery and sent a header across goal and into the far corner to seal a 2-1 victory for Jürgen Klopp’s side and keep their pursuit of a top-four finish in their own hands.

Indeed, the moment sparked scenes of pure emotion on the pitch and in the visiting dugout that will undoubtedly become iconic.

Achterberg told Liverpoolfc.com at the AXA Training Centre on Monday morning: “My reaction was like everyone else’s – jumping around like mad, last minute, winning goal, that’s how it is!

“You’re just so happy for him to do it but also for the team. We kept fighting, creating chances but not scoring them. The opponent made it difficult for us, so you have to find a way to overcome it. Ninety-fourth minute and nothing to lose…

“I looked at my watch, 94, and I thought it was going to be the last kick of the game, we needed to win, so I shouted, ‘Get up, get in the box!’ to him! I didn’t see Ali looking to the bench to see if he should go up before I shouted; I just thought we had nothing to lose and we needed to put everything into the box we had.

“The technique… he is natural in everything he does, playing and heading. It was a great finish.”

After the game, Alisson gave an emotional interview to Sky Sports as he reflected on a difficult few months away from the pitch with the tragic passing of his father, Jose, in February.

“He wanted to carry on, to play on and try to continue,” said Achterberg. “We have tried to be positive with him and talk about things when the time is right and try to make sure he is OK and support him and his whole family.

“It has not been an easy situation, but he believes his dad will watch over them – and that was the feeling with what happened yesterday. I had the same feeling, that his dad was watching over him.

“When we were talking after the game on the pitch, we spoke about that and I said to him that I believed his dad was there in that moment. We were emotional for him because we’d met his dad and his family, so it’s been a tough time but he has wanted to carry on.”

When Alisson returned to the dressing room after concluding his post-match media duties, he was met by a raucous round of applause from his teammates.

Achterberg added: “I heard it from the coaches’ dressing room – and that was quite a bit away! It was good to hear; everyone was made up for him but also for everyone, as a team, that we’re still fighting for it. We want to win and be successful together.”

Liverpool head into the final week of the 2020-21 Premier League season knowing six points from their matches with Burnley and Crystal Palace will see them secure Champions League football for next term.

“It was really important to stay in the race,” said Achterberg. “We needed to win, everyone knew that. We tried everything and it was great it happened.

“Obviously, it was also a great moment for Ali with the situation he has faced over this season and also with injuries we’ve had and things like that. It was great for the team, too. There were a lot of feelings after the game, you could see the emotion. Emotion because of what happened with his father, so it was great.

“But now we have to focus on the next one because there is another really hard task coming up on Wednesday. We need to keep fighting, keep creating the chances and then we will stick them away.”