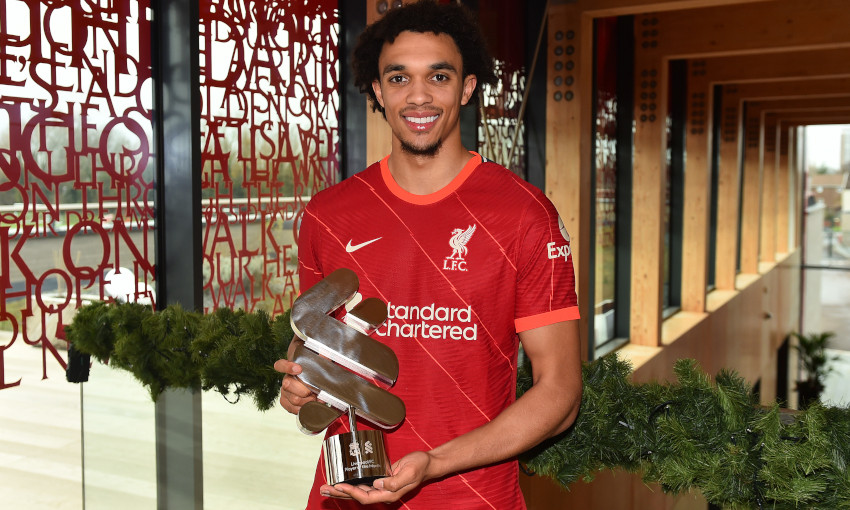 Trent Alexander-Arnold has been voted Liverpool's Standard Chartered Men's Player of the Month for November.

The No.66 wins the award for the first time this season after edging out competition from Mohamed Salah and Thiago Alcantara.

Alexander-Arnold appeared in four of the Reds' five fixtures in the month, registering six assists and one goal.

Upon collecting the prize at the AXA Training Centre, the Scouser told Liverpoolfc.com: "I felt like it was a good month for me and the team – put up good numbers and I was happy the fans voted for me.

"It's an honour every time, especially when you've got someone like Mo, and the other players, in fine form. It takes a lot to wrestle the award off him!

"There were good games across the board from me, to be honest. The Atletico game at home was a good one but I'd probably say Arsenal at home [was the best], for me – 4-0, clean sheet, two assists, it was the perfect game, to be honest."

Kicking off the month, the 23-year-old set up both goals in Liverpool's 2-0 victory over Atletico Madrid in the Champions League that clinched last-16 progression.

Alexander-Arnold then scored a stunning free-kick and assisted Divock Origi in the defeat at West Ham United on November 7.

He delivered that aforementioned pair of assists in the win against Arsenal at Anfield, before setting up Virgil van Dijk's volley in the 4-0 triumph over Southampton a week later.

Asked about his position on the right-hand side becoming even more advanced, he said: "It's just about playing where I feel is right. The manager has told us to kind of just let it flow and play the game how we feel it needs to be played.

"The triangle at the minute with me, Hendo and Mo has been really good, we've been able to contribute to a lot of goals so far and hopefully we'll be able to carry it on.

"It's about being unpredictable and giving the opposition as many problems as we can. So far we have done that and it's just about carrying that on."

The Reds have, of course, already made a stunning start to December, with three away games played and three memorable victories secured.

A 4-1 success at Goodison Park in the Merseyside derby was followed by a stoppage-time win at Wolverhampton Wanderers, before the Champions League group stage was wrapped up with a 2-1 defeat of AC Milan on Tuesday night.

On the importance of maintaining such confidence levels, Alexander-Arnold added: "Very. Games come thick and fast – every three or four days around this period, so it's important to have confidence, to have momentum and to feel like we can win every game.

"That's the feeling we've got at the minute, we've performed very well and we've scored goals. Obviously last week scoring the last-minute winner at Wolves was a massive confidence boost for us and then getting the win at the San Siro was massive as well for us.

"It has been a good start to the month for us. It's about carrying it on and making sure we win as many games as possible because any slip of form in this type of fixture schedule is always a bad one.

"If we can keep the momentum and consistency then we'll come out of it better than we went in."