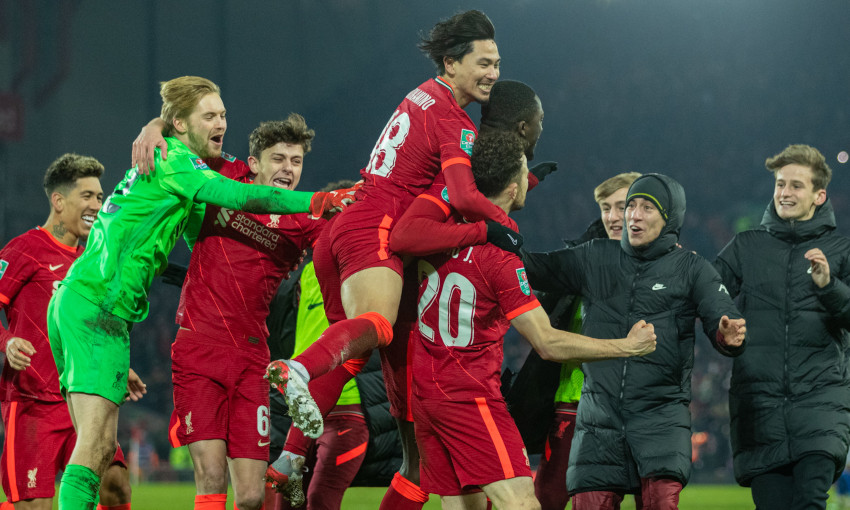 Liverpool advanced to the Carabao Cup semi-finals with a penalty shootout victory over Leicester City after a thrilling 3-3 draw.

A Jamie Vardy double inside the opening 13 minutes gave the Foxes command of the quarter-final tie at Anfield, and though Alex Oxlade-Chamberlain’s clinical conversion soon halved the deficit, James Maddison netted from long range to give the away team a strong half-time lead.

The Reds kept pushing for a way back into the contest and Diogo Jota’s strike midway through the second period set up a grandstand finale that was sealed when Takumi Minamino found the target with almost the last touch.

Caoimhin Kelleher made two saves in the subsequent spot-kicks, allowing Jota to seal Liverpool’s progress into the semi-finals in dramatic fashion.

Jürgen Klopp made 10 changes to his line-up from the weekend draw at Tottenham Hotspur, with Tyler Morton the only player to retain a place in the team.

On a bitterly cold pre-Christmas evening at Anfield, the visitors raced into a two-goal lead before the quarter-hour mark.

Kelleher had already had to get firm gloves on a fifth-minute effort from Patson Daka after he was released to move into the box along the left.

But the Liverpool goalkeeper was soon beaten by a low strike across him by Vardy, who finished into the bottom left corner at the Kop end when Maddison threaded a pass into his pocket of space in the area.

And the Leicester No.9 was swiftly celebrating again as he tucked home from close range, Daka providing the assist with a rolled delivery from the left having collected Kiernan Dewsbury-Hall’s pass in behind.

It was a punishing double blow to the much-changed Liverpool XI – but they landed a response to haul themselves back into the tie on 19 minutes. 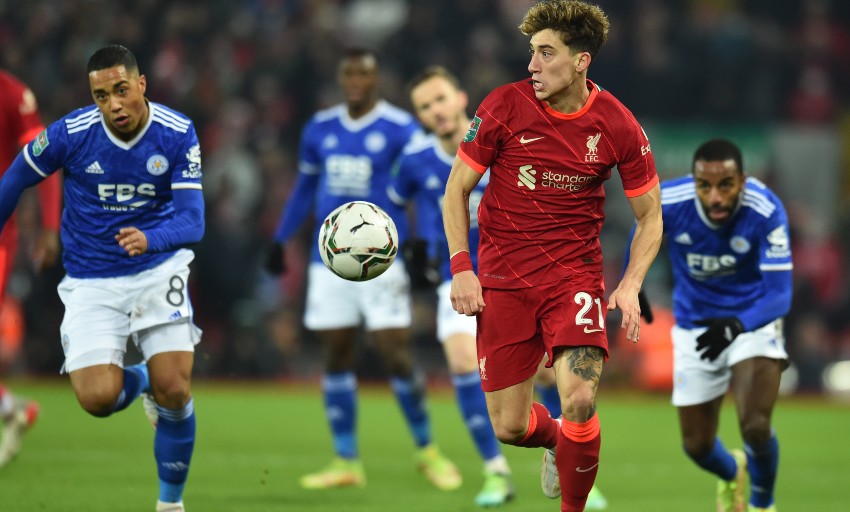 Clever footwork by Kostas Tsimikas down the left wing allowed the full-back to hoist in a deep cross that Neco Williams nodded into the middle of the Foxes box.

Roberto Firmino was outnumbered when he received the ball but showed strength to nudge it back to Oxlade-Chamberlain, who planted a perfect, sweeping shot beyond Kasper Schmeichel.

Minamino almost broke into a prime finishing position when Firmino stole possession from Boubakary Soumare and fed it forward, only for Dewsbury-Hall to get back and block; claims for a penalty were ignored by referee Andy Madley.

And Liverpool’s work towards levelling the contest was undone by Maddison’s long-range effort on 33 minutes. The Leicester midfielder got past Oxlade-Chamberlain in a central area and thumped the bouncing ball up and over the grasp of Kelleher from around 25 yards.

Only the left post prevented the Foxes adding a fourth before the break, Vardy denied after he had seized on Joe Gomez’s miscontrol from Morton’s pass back to him.

Klopp made a triple substitution ahead of the resumption, with Jota, Ibrahima Konate and James Milner all summoned from the bench.

And the Reds, supported by a crowd eager to aid a potential comeback, were energetic from the kick-off – though needed Kelleher to stop an extension of Leicester’s lead on 52.

Dewsbury-Hall darted in behind the backline and strode towards the Liverpool goal – partially hampered by Milner’s recovery challenge – but saw his low curler saved.

A last-ditch intervention by Caglar Soyuncu next thwarted Firmino as he lined up a finish from Minamino’s square across the box, and the boss then added Naby Keita to the field in place of Jordan Henderson.

The hosts’ growing pressure told in the 68th minute. After Jota had battled for the ball in opposition territory, it was moved from Firmino to Minamino and back to the Portuguese for a smartly taken clip past Schmeichel. 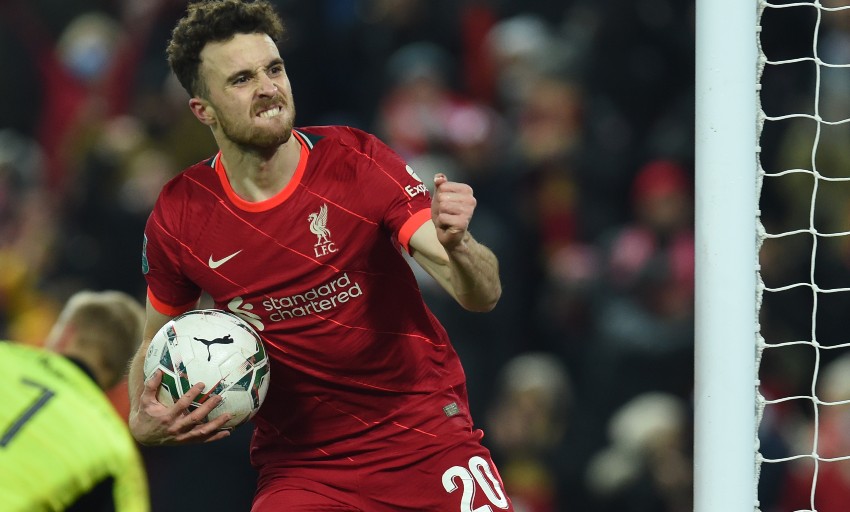 Anfield reacted in kind and, as an increasing level of needle took hold between the sides, Oxlade-Chamberlain lashed a strike from the edge of the box too high.

Williams was close when he rifled into the side-netting and Schmeichel produced a stunning reaction stop when Jota’s diving header diverted Keita’s wallop from 20 yards.

But a goal seemed to be coming and Minamino finally delivered it deep into six minutes of added time, controlling a pass on his chest before guiding a precise hit into the far right corner.

Kelleher was the hero for the home team in the shootout, repelling the kicks of Luke Thomas and Ryan Bertrand, before Jota converted to send Liverpool into the last four.