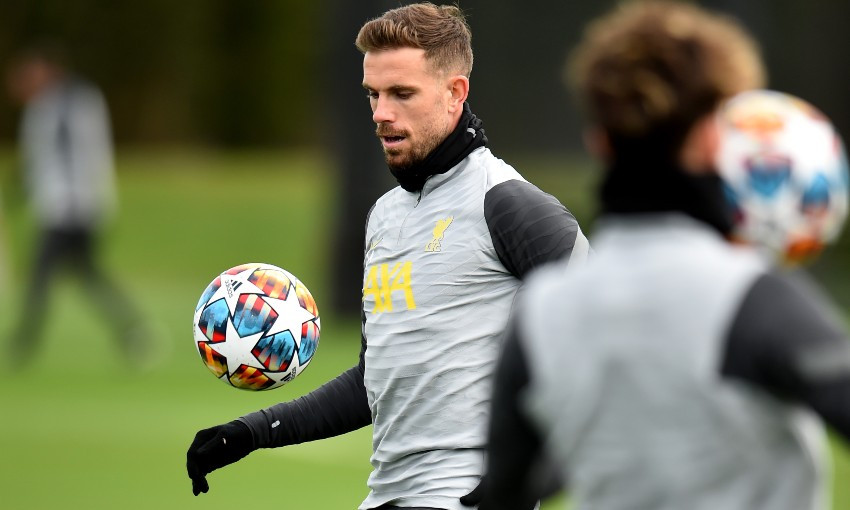 Jordan Henderson trained on Tuesday before Jürgen Klopp reported no fresh injury concerns in Liverpool’s squad prior to their Champions League tie with Internazionale.

The Reds visit San Siro for the last-16 first leg on Wednesday night and their captain, who picked up a knee problem during the 1-0 victory at Burnley at the weekend, is set to be available.

Klopp held his pre-match press conference after Tuesday’s session at the AXA Training Centre and said: “Hendo is fine. He got a knock on his knee and today was second-day recovery for a lot of players like for him as well, so it was not the longest session for him.

“But apart from that, there are no issues really. He was back last week and the knee in the game was definitely not comfortable, it’s a proper wound, you can really see it – it looks like lips, it should not be there. Apart from that, he is fine.”

The boss was also asked about the wealth of options that a fully fit squad offers him.

“Yeah, that’s absolutely a good situation to have, no doubt about that,” Klopp replied.

“We need fresh legs for this game but much more important is that we have the chance to change five times in the game, which is just a massive boost for football in general, in a really tough period of the year.

“It’s good to have the boys around but the boys have to deal with it as well. It’s really like this. If I have the opportunity to make more changes, that’s how it is, that means I cannot just play always the same line-up just because we won the last game.

“That’s something we have to learn together and that’s what we do, because we never had it before. It’s pretty exciting.”

Luis Diaz is eligible to make his Champions League debut for Liverpool, as are Robin Gosens and Felipe Caicedo - who have been registered for the knockout rounds in place of Aleksandar Kolarov and Stefano Sensi - for Inter.

The Nerazzuri will be without Nicolo Barella for both legs of the tie, however, after the midfielder was sent off in their final group-stage fixture against Real Madrid.

“I’m not 100 per cent sure but probably the replacement will be Arturo Vidal, maybe? That’s experience at its best, he played everywhere on the top level and I think in these games Arturo is especially motivated.

“So I’m not so sure if it’s an advantage for us that he will play instead of Barella, but that’s not so important.”

Defender Alessandro Bastoni suffered a sprained ankle during Inter’s win over AS Roma last week while forward Joaquin Correa has missed their last four games due to a hamstring injury.

Head coach Simone Inzaghi gave little away when he was quizzed on which of forwards Edin Dzeko, Lautaro Martinez and Alexis Sanchez will start.

“At the moment, all the players have the same chance of playing,” Inzaghi told reporters.

“We still have some training sessions to come, so we’ll assess the condition of all three forwards. Two will play and the third will come off the bench. I have very mature players who accept these decisions.

“There are plenty of games and there will always be an element of rotation.”

The Reds, of course, beat Inter’s city rivals AC Milan home and away in the group stage and Inzaghi was asked what he has learned from those matches.

“We watched those games, as well as Liverpool’s most recent matches,” he said.

“Klopp is a wonderful coach. His team always plays with great intensity both in and out of possession. Alisson and Van Dijk can play the ball long. Their full-backs have the technical ability of playmakers. They can cause you problems all over the pitch.”