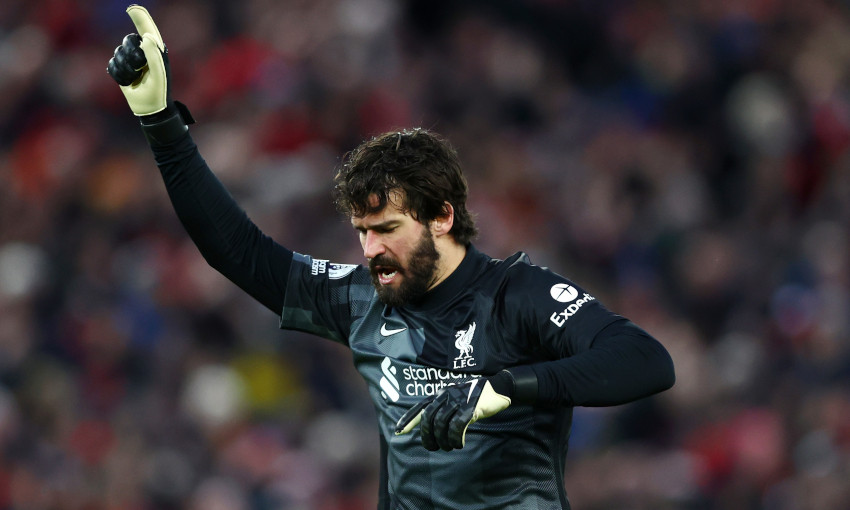 Inside Forest: How the Reds reached the FA Cup semi-finals

Alisson Becker has discussed some of the driving forces behind his happiness at Liverpool and Jürgen Klopp's squad's push for silverware this season.

The Reds secured a spot in the final four of the Emirates FA Cup on Sunday night with a 1-0 victory over Nottingham Forest at the City Ground.

After the current international break they will continue to compete for three honours – Premier League, Champions League and FA Cup – having already secured Carabao Cup glory at Wembley last month.

Alisson, who claimed a fifth consecutive away clean sheet at Forest, recently reflected on the team’s Premier League determination, his relationship with his manager and his ability with the ball at his feet.

Read on for the best bits of the No.1’s interview with one of his predecessors, David James, for Sony Sports India…

I think the big thing is having confidence. You get confidence from doing things, from playing. You need to have a team which likes to play with the goalkeeper as well and you need to have a manager who gives you the freedom to play because you can be good [for the team]. But if your players turn their back to you when you have the ball, you can only kick long balls and work like that.

I have the skills that are needed but I worked a lot on it when I was playing for my youth team. I had a manager once who loved the [Pep] Guardiola team from Barcelona which used the goalkeeper a lot, so he tried to do that with his team in the U20s and it helped me a lot. Then I went to Rome and improved a little bit, but here at Liverpool is the place that I feel most comfortable because the players really want me to be an extra player on the pitch.

Yeah, it gives a really good push for us because we did that for them as well. So that moment wasn’t possible, but we felt like they were celebrating together with us. They were at home, of course, but you had the feeling that we were not alone. The Premier League is tough. It’s hard to win. There are a lot of good teams and the level is improving, improving, improving – not only the teams at the top but the others as well. So yes, we need to stay focused, thinking game by game and then see what will happen. We have a good team. We have a team who can fight for it.

On his relationship with Klopp…

Yeah, it is a really good relationship. He’s like a father to me. When I spoke with him for the first time on a FaceTime video call, he just answered the call and started to smile, I started to smile and we could already see that we would have a connection. I think I have some feelings about life and how life works which are similar to him.

I really like the way he works and the way he makes the team feel comfortable and at the same time puts pressure on us. He’s a guy who is always happy, but when you go onto the pitch it’s hard work, serious work and he’s a top manager, so all those things contribute to a good relationship. I really love to be here and working with him. I love my life here at Liverpool.