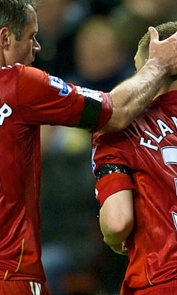 Kenny Dalglish today admitted Liverpool's senior stars have been boosted by the performances of youngsters John Flanagan and Jack Robinson.

Flanagan could make it three starts in a row against Birmingham today after impressing on his debut against Manchester City and then again at Arsenal last weekend, while Robinson will be hoping to keep his place at left back after an assured substitute display at the Emirates.

Dalglish says both youngsters have benefited from the injuries which have swept through the first-team squad - but he has been impressed with the way both have risen to the challenge.

"It's more difficult for youngsters to break through these days, but their fortune has been we have had a lot of injuries so they have gone in sooner than they should have," he said.

"You need a bit of luck in this life. Those two lads have had a bit of luck at the moment, being in the right place at the right time and being able to play football. And we've had a bit of good fortune, in that the Academy in the last 18 months has been really productive. It's an opportune moment for everybody. They have come in and done themselves the power of good.

"Also, in a strange way, seeing some young faces in there has given the other first team players a lift."

The Reds' recent run has brought European dreams for next season back to life with a top five finish now very much back on the agenda - and the boss is keen to pay tribute to every member of his squad.

"They've all been fantastic in training, their approach and their attitude.

"Signing Luis Suarez and Andy Carroll was a big thing in January. That lifted everyone.

"The attitude of the players who aren't playing is really important and they have been brilliant.

"Most of them are quite forward players, apart from Christian Poulsen, and it's difficult for us to get them a game because our injuries are at the back.

"They are deserving of a game because of their attitude and the way they have gone about their work.

"If we continue like that throughout the whole club then we'll have a wee chance because the ones who are not playing, it's more difficult for them."

Saturday: Kop Kids is back...