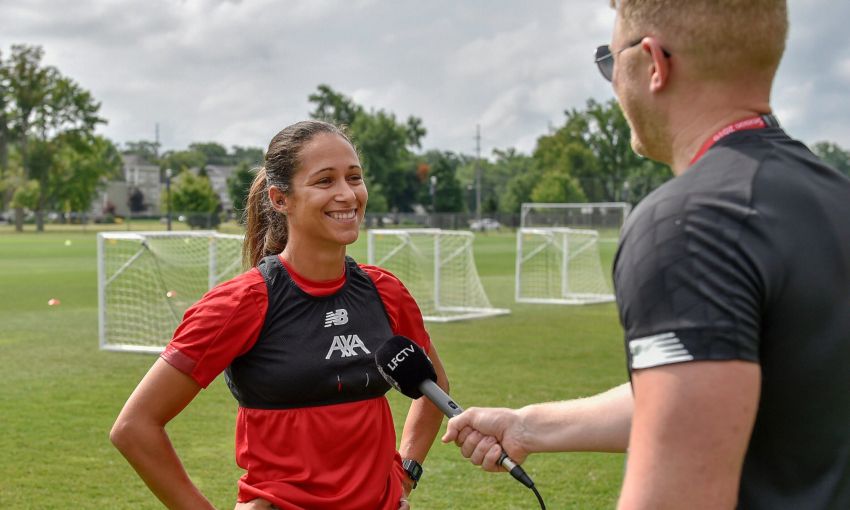 LFC Women look to gear up with new partners

Liverpool FC Women's pre-season tour of the United States represents 'a big step forward' for the players and the game, according to Courtney Sweetman-Kirk.

Vicky Jepson’s side joined the men’s team on their journey to Indiana on Tuesday for a nine-day stay in America that will include two matches.

Sweetman-Kirk, the Reds’ top scorer in 2018-19, also expects the trip to benefit LFC Women’s ambitions to improve on their form last term.

“It has been a really nice experience,” the No.9 told Liverpoolfc.com.

“It is a different experience for us and most of the WSL, it’s a big step forward for us. We’re excited to see what goes on for the next few days as well.

“It’s a long season, there’ll be ups and downs and in the hard times we really need to make sure we stick together – and it’s the start of that this week.”

Sweetman-Kirk registered 12 goals in all competitions last season and, though she refused to divulge specifics, is eager to increase that tally in the forthcoming campaign.

“Yes… but I’m not telling you!” she replied when asked about targets.

“I came late into pre-season last year so to have a full pre-season with the girls, I’m definitely looking to improve, let’s put it that way.

“I feel really good, I’m excited. It was a good season for me personally but the ultimate goal is obviously to win trophies and have a good season as a collective.

“It’s going to be an exciting season for us and for the WSL in general. We’re excited to get started.”