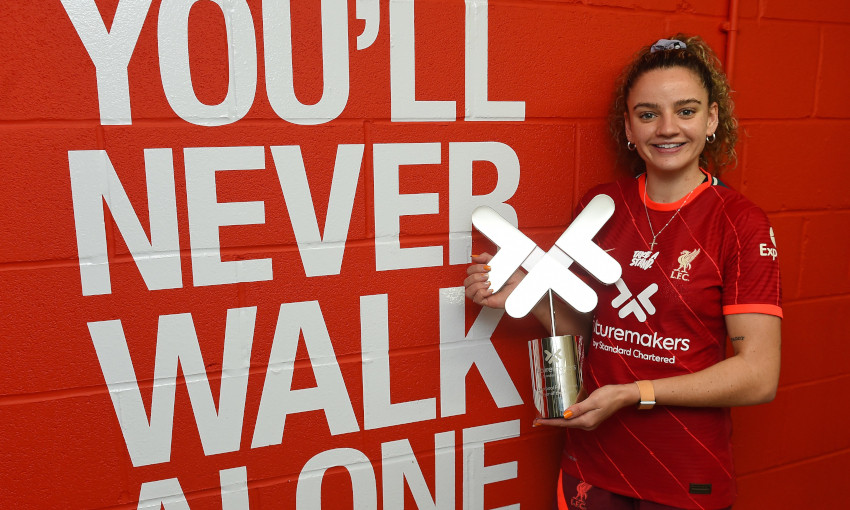 Leanne Kiernan has been voted Liverpool FC Women's Standard Chartered Player of the Month for October.

The 22-year-old forward enjoyed a stellar month that saw her net six goals in four appearances in all competitions, including doubles against Coventry United and Lewes FC.

Those strikes have helped take Matt Beard’s side to within a point of leaders Durham in the FA Women’s Championship, with the two sides meeting in the north east at 12pm GMT on Sunday.

After picking up her trophy, the Republic of Ireland international paid tribute to her teammates and the coaching staff for their part in her success.

“It’s a really nice recognition but I’m just really humbled and proud to be a part of such a great group of girls here,” said Kiernan. “I’m really enjoying it and they say you produce your best football when you’re happy.

“All the girls are working really hard on the training pitch – if it wasn’t for them I wouldn’t be up for any awards or scoring any goals. The coaching staff have been great and of course I have to thank Beardy for having the confidence in me to play me in all these games.”

Fans have already seen Kiernan play on the wing and through the middle, and the No.9 is happy to feature in either role.

“At West Ham I played on the wing most of the time and then with Ireland I tend to play through the middle, so I should know both roles like the back of my hand by now,” she said. “It’s nice to do and a lot of our team can do that, play in different roles.”

Of her goals during October, Kiernan picked out a couple as her particular favourites.

“I enjoyed the goal against Lewes [an instinctive effort hit on the turn],” she said. “But also the goal at Coventry because we just needed something to break that game open, so it was a really important goal for the team.”

A top-of-the-table battle awaits at Durham on Sunday when the Reds will play once again on an artificial surface; Kiernan is just relishing the prospect of getting back on the pitch.

“Of course it’s not ideal when you’re used to playing on grass every day, but there will be no excuses from us,” she concluded. “I’m just really looking forward to the game.”