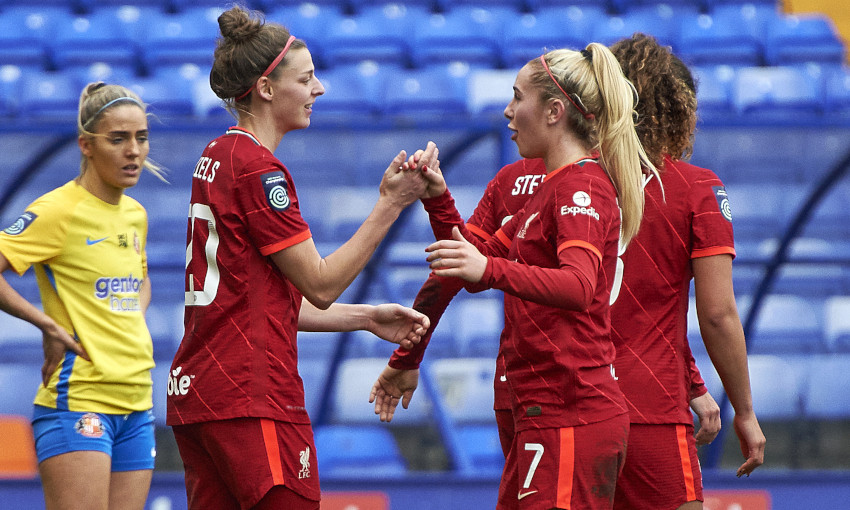 Liverpool FC Women recorded their seventh consecutive victory in the FA Women’s Championship with a hard-fought 3-0 against Sunderland AFC Ladies at Prenton Park.

Penalties from Katie Stengel and Missy Bo Kearns sandwiched a low drive from Yana Daniels to take the Reds to a win at Prenton Park on Sunday, despite a determined battle by the visitors.

Stengel’s opener early in the second half proved a decisive moment in the contest as Sunderland also lost Neve Herron to a red card for the challenge from behind in the box.

It was the American striker’s fourth goal since her arrival in January in what has proved an important signing for Matt Beard’s side.

Daniels delivered a second for the hosts with five minutes left and Kearns then finished off a good result with another spot-kick in added time, as Liverpool stretched their lead to 10 points at the top of the table with seven games still to play.

The first half saw chances at both ends, with Beard’s charges struggling to break down a stubborn and well-organised defence amid blustery conditions once again.

Keira Ramshaw had a couple of efforts for Sunderland and she provided the first shot on goal, firing over the crossbar from a tight angle inside the first five minutes.

Taylor Hinds scored a screamer last week against Coventry United and good build-up from the Reds allowed the wing-back to try her luck here, this time the effort just wide of the post.

On 10 minutes, Daniels chased a long ball from Leighanne Robe into the opposition area and appeared to get there just before goalkeeper Allison Cowling.

Most inside the stadium were waiting for a penalty signal but referee Golba Magdalena decided it was a foul by the Liverpool winger and a free-kick the other way. 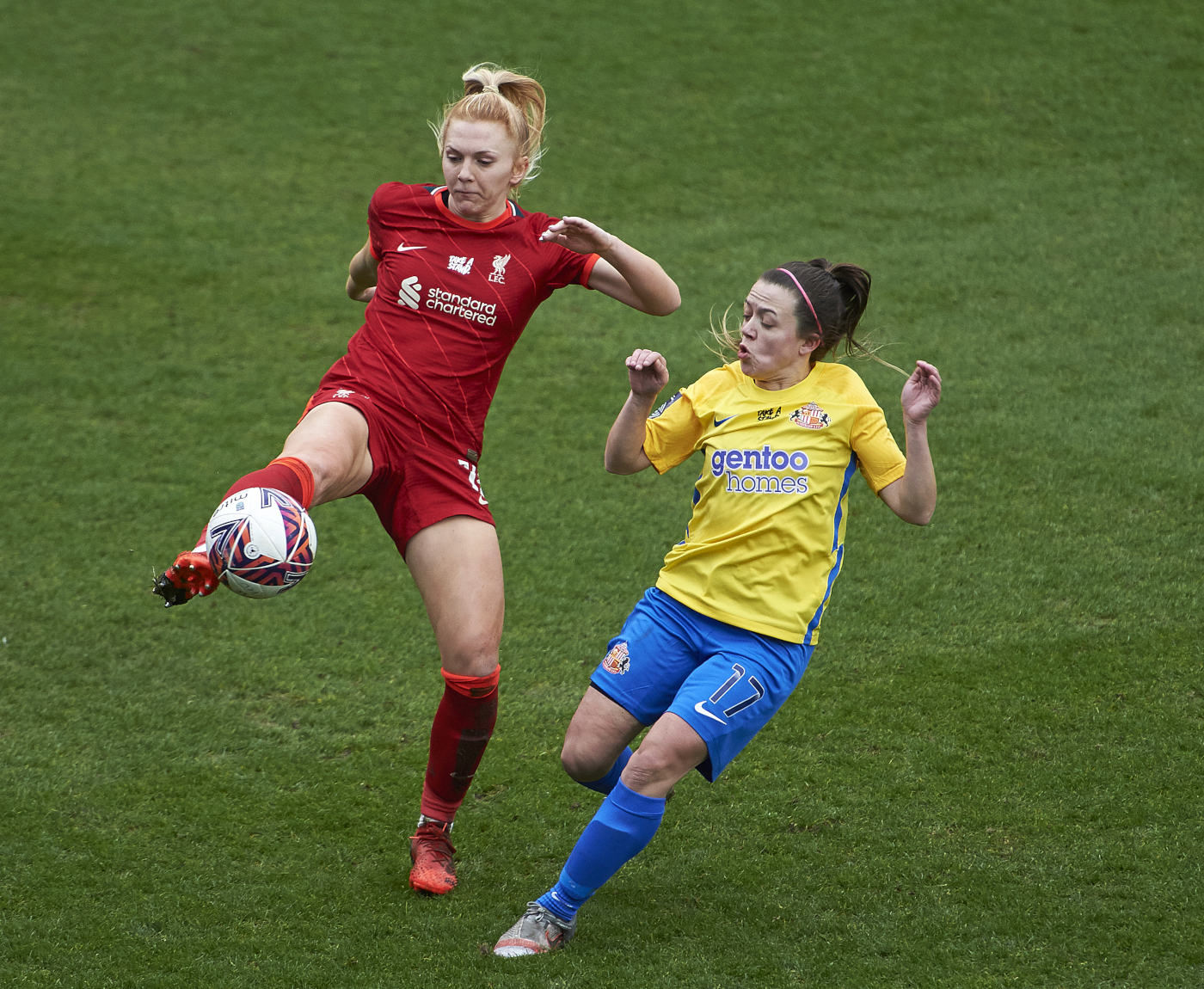 Rachel Furness tried a shot from distance for the Reds, while Ramshaw had another effort at the other end, Rachael Laws getting right behind it and saving well.

The visitors were a threat on the break and Emily Scarr missed a big chance midway through the half when she collected a good pass out of defence, cut inside Robe and struck at goal – but it was tipped over superbly by Laws.

Liverpool had another strong penalty claim on the half-hour; Stengel appeared to be bundled over by Cowling as they competed for a ball in the box, but again the referee waved play on.

Maria Farrugia fired low at Laws and Reds captain Niamh Fahey finished off some great work from Stengel with a good attempt from the edge of the area that Cowling saved well.

Rhiannon Roberts – playing her 50th league match for the Reds – brought Cowling into action again, when her header was pushed away after a cross to the back post from Hinds, and the latter also had a free-kick cleared off the line by Herron just before the break.

The crucial opener came just two minutes into the second half. Ceri Holland played a neat pass through to Stengel and Herron took her down from behind, the referee pointing to the spot and showing a red card to the Sunderland defender.

Stengel stepped up to plant her penalty high to the goalkeeper’s left – much to the delight of the LFC Women supporters sitting in the Kop behind the goal. 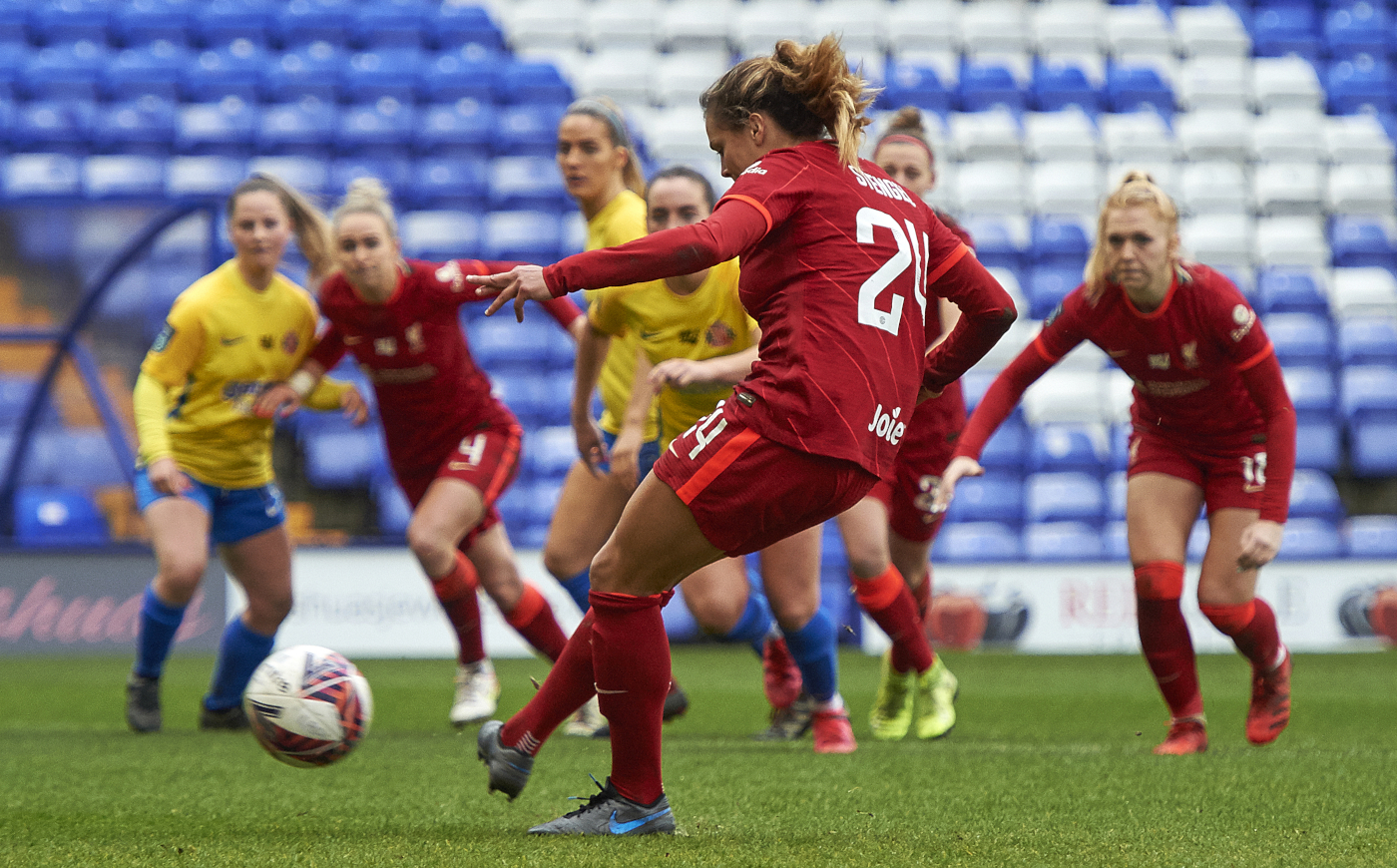 The Reds dominated after that, though Laws had to make a good low stop to deny Abbey Joice on a counter-attack, as she clocked up a record-breaking 10th clean sheet of the league campaign.

Melissa Lawley arrived from the bench in fine form, driving a fine effort just over from 25 yards and having another cleared off the line by Louise Griffiths after turning well when Cowling had spilled a ball in the box.

January’s Standard Chartered Player of the Month, Megan Campbell, was also introduced from the bench and her long throw, always a potent weapon, caused chaos on 63 minutes with the ball ending up in the net. However, it was ruled out as no-one had touched it on its way through.

Leanne Kiernan hit the crossbar with 20 minutes left, having stretched to reach a good ball from Hinds, but the second goal was proving elusive.

It finally arrived with five minutes remaining as another long throw from Campbell was never fully cleared and Stengel was able to control and set up Daniels for a tidy low finish.

There was still time for a third, Stengel involved again as she was felled in the area before allowing Kearns to step up this time, who drove the ball low to Cowling’s right for her second goal of the season in stoppage time.