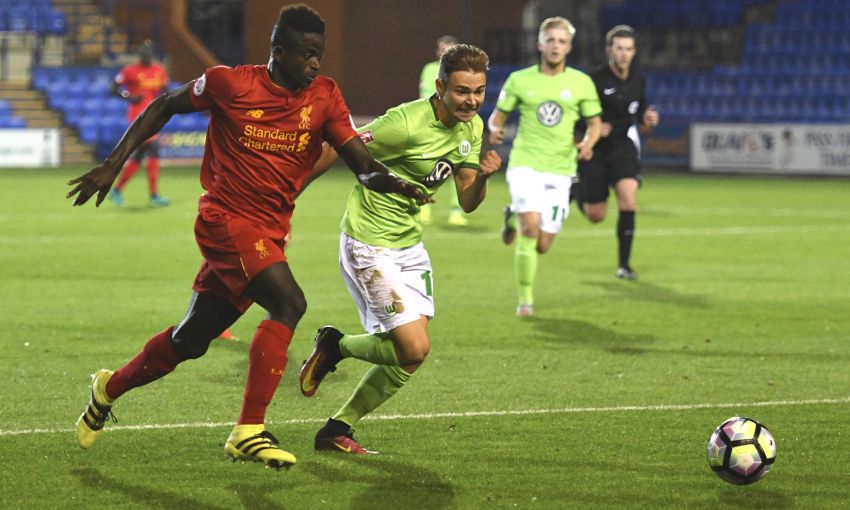 Michael Beale’s team were in imperious form heading into the tie, having claimed victories in each of their previous four league fixtures, but fell behind early in the second half to a Josip Brekalo rebound.

Substitute Brooks Lennon thought he had claimed a point that the young Reds merited across the 90 minutes when he escaped in behind and found the back of the net with a composed finish late on.

But Wolfsburg grabbed the victory in stoppage-time as a short corner routine set up Hendrik Hansen for a clinical header, leaving Liverpool with work to do in Group C when they face FC Porto and Leicester City later this year.

The unfamiliarity between the two sides made for a cagey opening to the encounter and though the visitors enjoyed more possession, their path to goal was firmly blocked by Tiago Ilori and Mamadou Sakho.

Wolfsburg did forge a half-chance on 20 minutes when Anton Donkor made ground on the left flank and squared to Borja Mayoral, whose low shot was a comfortable take for Caoimhin Kelleher.

In response, Cameron Brannagan could not keep a header down after being picked out by a cross-field Pedro Chirivella delivery and Matty Virtue clipped a left-footer yards wide.

Chirivella curled a free-kick from the edge of the area narrowly over the bar at one end and, within moments, Sebastian Wimmer forced Kelleher to tip away a set-piece strike from a similar angle.

Liverpool created the best chance to that point in the 27th minute as Joe Maguire’s deep cross from the left found Harry Wilson unmarked in the box – but the captain miscued his effort and the moment was gone.

The pace and power of Toni Gomes allowed the forward to burst into the area shortly before the break, only for the angle to tighten, and his eventual shot skewed wide.

Brannagan then had his head in his hands with frustration after forcing his way into a one-on-one situation with the goalkeeper in the Wolfsburg area and prodding a finish off target.

And the young Reds were punished six minutes into the second half.

A turnover yards outside their own box presented the German side with a chance to counter-attack and though Kelleher reacted to palm away Donkor’s swerving hit, Brekalo was first to the rebound and converted to put Wolfsburg ahead.

Mayoral brought a smart save out of the Liverpool ‘keeper on the hour mark when he spun and fired towards the near post, as the visitors began to take a real hold of the contest.

Watch the best of the Wolfsburg action on LFCTV GO

Beale sent on Lennon and Adam Phillips in the search for an equaliser and the former did have the ball in the net on 73 minutes but the American’s effort from Chirivella’s assist was ruled out for offside.

Liverpool refused to give it up as the seconds ticked away and Lennon was agonisingly close to meeting Ben Woodburn’s inviting cross-shot at the back post.

But the duo did combine to effect in the 81st minute.

Lennon’s run in behind was timed to perfection to meet a precise through pass from Woodburn and the striker kept his cool to send a finish underneath the Wolfsburg ‘keeper.

There was still time for drama, however, and Sakho was inches away from winning it with a header from a corner that bounced just wide, before Mayoral struck the post for the visitors at the other end.

And the away team secured the points a minute into stoppage-time. A short corner caught the Reds unaware and a cross into the middle teed up Hansen to power a header beyond Kelleher.