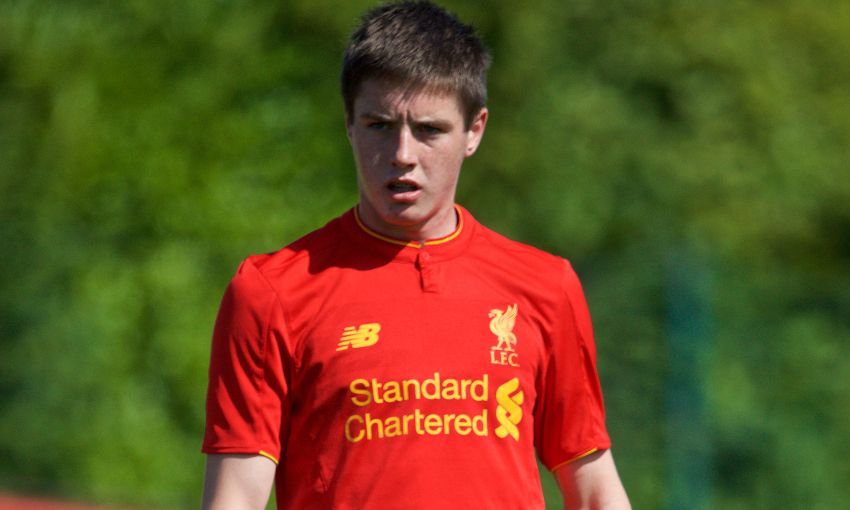 'This team is dangerous, there's always a chance of goals'

Liam Coyle has a trademark way of turning up at Melwood for his weekly training session under the guidance of Pepijn Lijnders – he walks.

The 17-year-old Scouser lives a short stroll away from the first-team complex and, like all of the young hopefuls from Kirkby, the boyhood Red dreams of the chance to represent the club at the highest level.

“I live 10 minutes away and I often walk to training when I am down at Melwood, which is an unbelievable experience,” Coyle told Liverpoolfc.com.

“I’ve been at Liverpool since I was 10 years old and I would love to play for the first team one day – I want it so bad.”

It is obvious this likeable midfielder has a level head on his shoulders.

Aware of the importance of listening to the precious advice offered by the coaches around him, Coyle’s personality matches his style of play – brimming with determination to give everything in pursuit of his goal.

Read on to find out more about the character behind the tough tackler – plus the new-found opportunity to work with an idol, and much more – in the latest edition of our relaunched ‘Meet the Academy’ series…

One of the first things that comes to mind when supporters watch you play is ‘this lad loves to make a tackle’ – how important is that in your game?

“It is very important to me, especially with the position I play in front of the back four. It is my job to break the play up and then start the attacks for the team. It gets the team going if they see a big tackle going in and it sparks everyone else into action.” 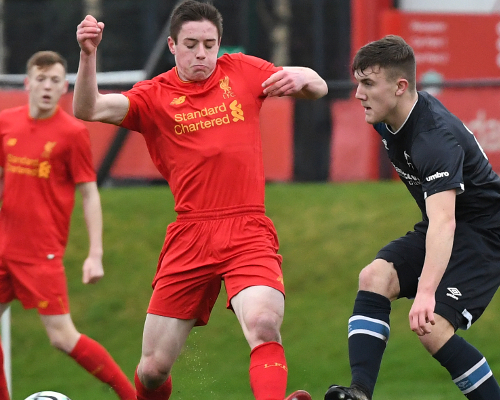 People often say tackling is something of a dying art in modern football. You don’t see it that way?

“No way, but I know I have to be careful sometimes and try to avoid yellow cards.”

Is that something you have worked on with the coaches, controlled aggression?

“Neil Critchley does speak to me about that and he has given me some help and advice on avoiding silly things. I’ve been sent off a couple of times now, so I know what I need to do better and not dive in and make silly challenges. I’m working hard at that side of my game.”

How did your move to Liverpool come about?

“I was playing for my dad’s Sunday league team in West Derby, Rail Vikings. I was in the development squad for six months, I had a six-week trial and then signed for Liverpool at the age of 10.”

Tell us about your love for the Reds…

“I’m a massive Liverpool fan and I don’t miss a game, except for when we have a game at the same time for the U18s.”

You have captained the U18s this season when Conor Masterson moved up to the U23s. How much pride did that give you?

“It was a great feeling to get given the armband. I’ve captained Liverpool previously at U15 and U16 level. I know I’m a leader anyway without the armband, which is a big part of my game.”

What sort of captain are you? Steven Gerrard, who is coaching at the Academy, led by example. Are you quite similar in that sense?

“I do like to see myself as someone who tries to lead by example. I’m also very vocal out on the pitch. That comes from watching Jamie Carragher when he played for Liverpool.”

What’s it like having Steven Gerrard working here as a coach?

“It’s unbelievable, to be honest. When we are out training and you can see him watching you, it makes you want to impress him. You see him standing there and you think to yourself about all the great things this man has done for the football club and what he has achieved. Just before I came in for this chat, I was working on my passing, long and short, on the training field with Steven. He just hits these unbelievable long-range passes and he makes them look so easy. I can assure you they are not and you just think, ‘wow!’” 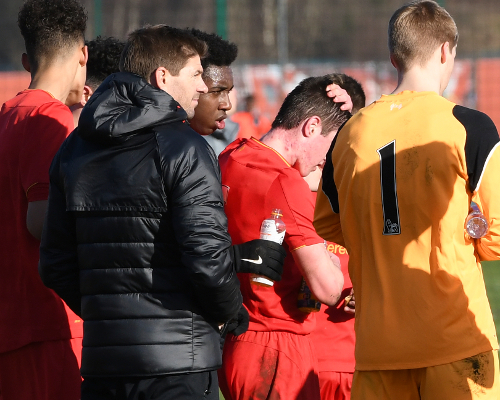 We saw a lovely shot of Gerrard talking to you recently when he was on the sidelines for an U18s game. What did he say to you?

Have you always been a central midfield player?

“I played central midfield for the Sunday league team but when I first came to Liverpool they played me right wing, left wing, at the back and also at centre-half, but that was never going to be a permanent position for me because of my height! I then switched to a No.6 role, which I really enjoy.”

Supporters may remember you and Ben Woodburn both making your debuts at U18 level last season when the pair of you were just 15. Can you remember how you felt when Neil Critchley told you you’d be playing for the U18s?

“I remember being told I was going to be starting at right-back. I had only played there a couple of times and although it’s not my favourite position, you have to play where you are told for the good of the team. I then got told I would be playing in central midfield and even though it was a bad day for us because we lost 4-0 at home to Blackburn Rovers, I was told I did quite well.”

I think we probably know the answer to this question already, but who’s your footballing idol?

“Steven Gerrard is one definitely. I would also say Jamie Carragher, I admired him so much, and Javier Mascherano when he played for Liverpool. I know he plays at centre-half for Barcelona now but Mascherano was an unbelievable midfield player for Liverpool. Last week I was watching that 4-0 win over Real Madrid at Anfield again and Mascherano was just immense.” 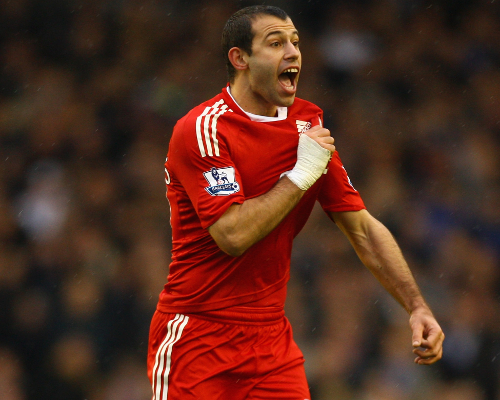 If you had to pick out your favourite Gerrard moment, what would it be?

“It would have to be the FA Cup final against West Ham United when he scored that goal to make it 3-3 – that summed him up really, didn’t it? His performance in Istanbul has to be up there as well.”

“That goal against West Ham and also the one against Olympiacos in front of the Kop – what a goal that was!”

If you had to pick one current Premier League player you look up to and see yourself in, who would it be?

“I like watching Kante of Chelsea because of the way he gets around the pitch. I saw the tackling stats from him, which are very impressive, so I look up to him.”

Who in Liverpool’s first-team squad do you admire most?

“Jordan Henderson. I play in the same position as him. His passing range is very good, he is a leader and he is always in the right positions to press. I’ve always admired Lucas as well, it’s great to see him still at the club and he’s been here for years.”

You have had the opportunity to train alongside those two players at Melwood. What is that experience like?

“It’s brilliant. Jordan and Lucas spoke with me and gave some advice. Once you get going in the training session, though, you are like one of them and you have to stand up for yourself. It’s not kids football, all eyes are on you and you have to impress.”

What’s the highlight of your career so far?

“Captaining the U18s and learning off Steven Gerrard.”

What’s your dream in football?

“To play for Liverpool’s first team and to play in the Champions League for the club.”

You haven’t played at Anfield at youth level yet, but you have played on the famous pitch...

“I played there for my school team, St Paul’s of West Derby, and I scored two penalties in front of the Kop! There was nobody in the Kop but it meant everything to me. I remember after the game, former Liverpool defender Mark Lawrenson came over to me and said: ‘You’re the lad who scored twice in front of the Kop, well done!’”

“It’s got to be the 2005 Champions League final in Istanbul.” 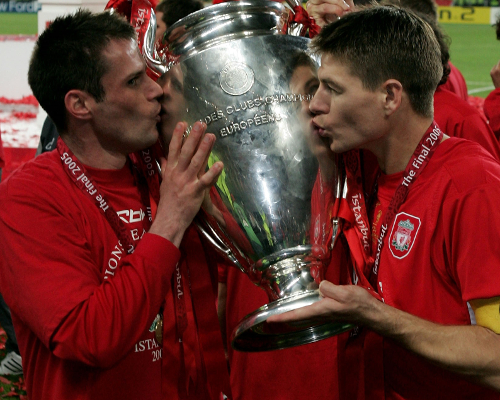 Favourite sport other than football?

“Darts. I’ve got a dart board in the house. I play against my younger brother and my dad. I do alright!”

“I love watching Match of the Day.”

What music are you listening to at the moment?

“Just whatever is on the radio really. If I like a song I’ll download it. Okera Simmonds is in charge of the music in the dressing room but some of the songs he puts on aren’t great. We have some funny banter with Okera and Bobby Adekanye about their music tastes. I’d like a bit of house music on before a game to get you going.”

Describe yourself in three words...

Click here to read our ‘Meet the Academy’ feature with Glen McAuley.