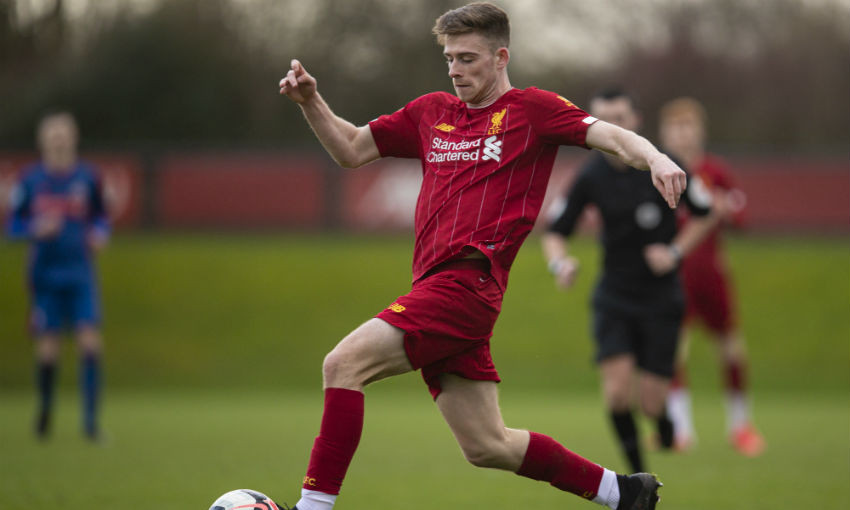 Tony Gallacher has already noticed the connections between himself and a certain Champions League-winning full-back.

Gallacher, an U23s defender who joined from Falkirk in January 2018, doesn't need to look far for inspiration with Andy Robertson established as one of the best in the business.

"Whenever I get the chance to go to Melwood, obviously I'm keeping a second eye just to watch what he does and try to copy him," the 20-year-old told Liverpoolfc.com. "He's a quality player and he's shown that.

"I've only been up to Melwood a couple of times, but you can tell that no-one wouldn't get along with him.

"He's got that personality about him that he's just a likeable guy. He's one of the louder ones in the changing room, I've heard!"

Read on below for our full chat with Gallacher about his first two years on Merseyside... 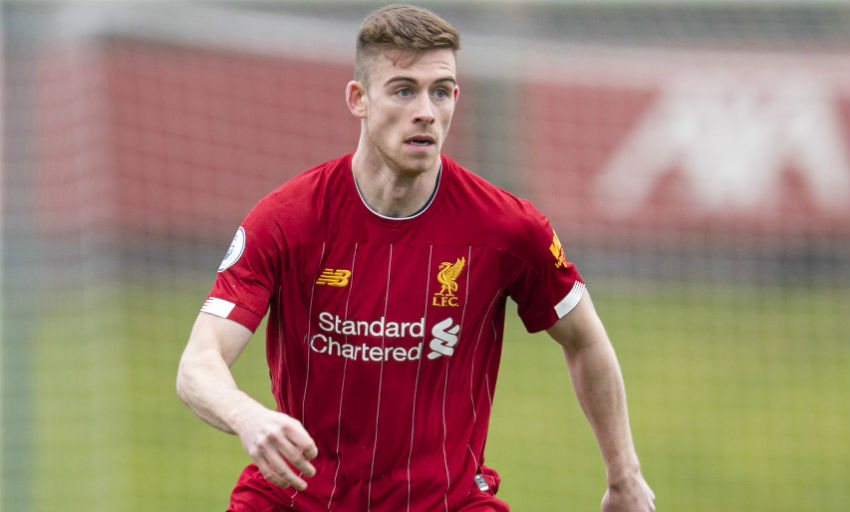 You were playing first-team football at Falkirk before leaving for Liverpool. Was that a hard decision to make after being there for so long?

The hard part was probably just moving away from home. For me, the football was a no-brainer. The minute my agent phoned me saying, 'Liverpool are going to give you a trial' and then the minute they said they wanted to sign me, it was an easy answer. The only difficult part was leaving home. But after a month, if that, you settle in and you get used to your new surroundings.

What do you think you've improved on since arriving as an 18-year-old?

I'd say knowing the game positional-wise, knowing what position to be in at a certain time in a game and when to attack. Just general game management, I'd say – that's much more strict here. Then all of a sudden the press that Liverpool do is like no other team. It took me a few weeks to learn how intense it was, just to get used to it all. You sort of come into it like, 'Is this how we're really doing it for 90 minutes?' But that's why they are where they are right now – it works.

How did the move to Liverpool come about then?

Initially I was meant to be going to Swansea on trial. I was literally getting set up for Swansea and then a day or two before my agent just called saying, 'Yeah, Liverpool have come in last minute giving you a trial, so we'll go with that one straight away'. It sort of happened really quick. I came in, trial and then on my way home on the train with my dad that's when I got told they wanted to give me a contract. Then a couple of days later I was down and moved into digs. It all happened in the blink of an eye.

And Kenny Dalglish was with you and your family on the day you signed...

They said, 'We've got a surprise for you'. And I was like, 'Alright, what's going on here?' We were just at the Academy and then he came in. He was just asking where we were from. At first, I was like, wow, I didn't realise he didn't lose any of his accent at all – not one bit! It was good because he's such a big name, King Kenny. Seeing him on the day, especially when the highs were so high, was great. And because he's Scottish it makes it that bit better. I was a bit starstruck, to be honest. 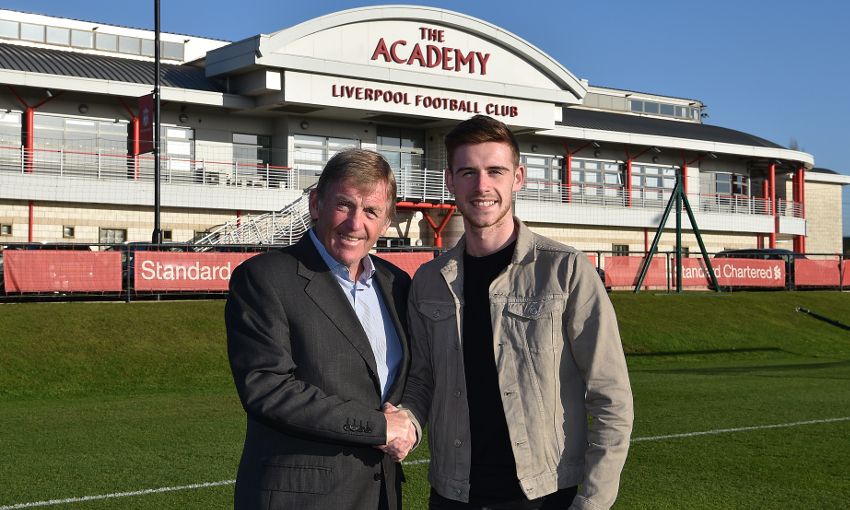 You've also played right-back and centre-back for the U23s this season. Just how important is it to be versatile as a youngster?

It sort of came about this season really, I've never really played there before. I had a good run of games playing at right-back and my form actually got better. Over the Christmas period when I was playing there, it gave me that confidence at left-back and it felt easier again. Because on the other side you can't really look down the line, so you come inside more and it gives you that bit more confidence and getting involved. With players such as James Milner being able to just play anywhere, it is good to have [versatility] because that way you're not limited to where the coach can trust you.

Now you've been at Melwood a few times, so what's that been like?

Nervous! There's such big names there. Coming from where I've come from, you just talk about these players. You never really think you're going to be training with them at any point in your career. When I go up there, they make it easy for you because you obviously know who they are. You're going to be nervous and have your head down a bit and getting on with your business. But when you go up there, they're easy-going and make it easy for you. At the same time, if you're not going about it right then they'll make sure you know, which is good. They won't shy back from standards being as high as they're meant to be. 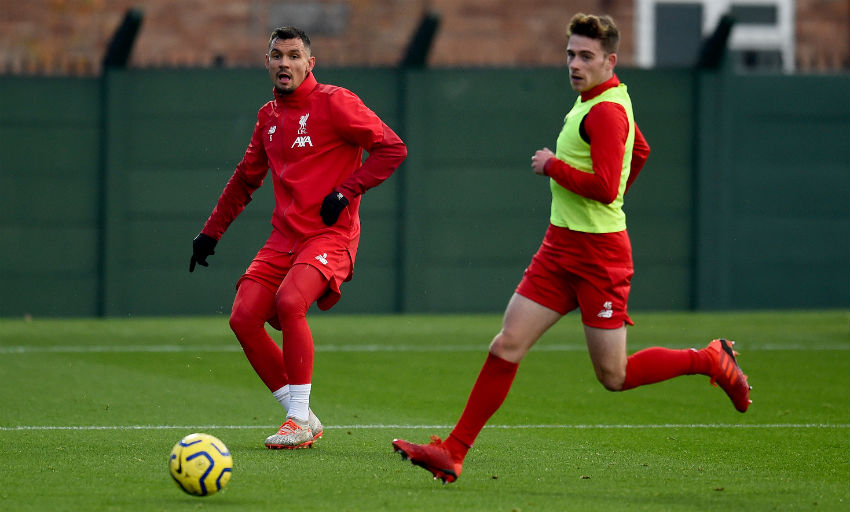 Does anything surprise you when you're there?

You'd think in training maybe they'll just rest a bit here and there because of all the games they have – but it's nothing like that. The training standard is just as high as it is in a game. I think that's why they're able to go and do what they do over a consistent amount of games. Because they're training at such high standards, when they go into games it's no different and nothing changes. I think the standard and the drive comes from all the players – not just like Henderson the captain, Milner, Lallana as the more experienced ones, it comes from everyone.

You made your senior debut at Aston Villa in the League Cup quarter-finals, but what are your targets for the future?

That game was a once-in-a-lifetime situation where you wouldn't even think of it normally, you couldn't even guess that it would happen. I've made my debut for Liverpool and no-one can say I haven't. But I want to do my best to be given that chance and be trusted in a big game alongside other first-team players as such. But that night was unforgettable. I had my family down watching, some watching on the TV. It was great and I loved it.

Tony Gallacher nominated for PL2 Player of the Month