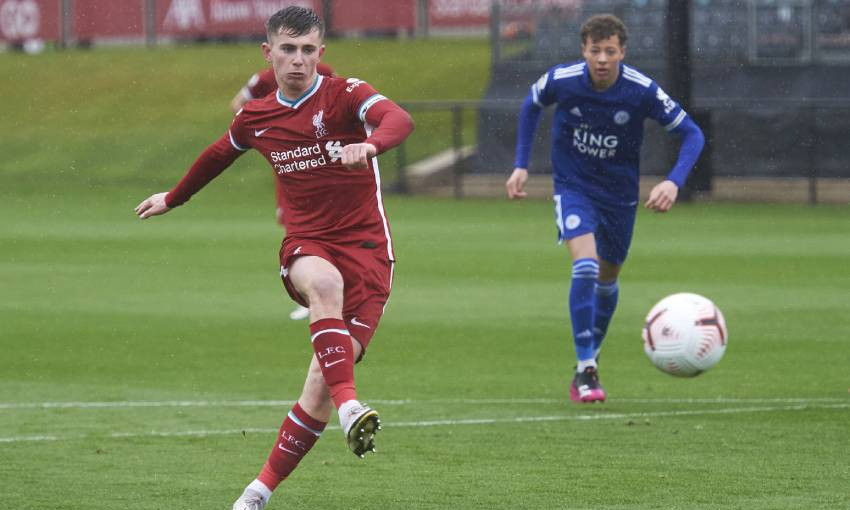 Liverpool U23s earned a commendable 2-2 draw against Leicester City at the Kirkby Academy on Monday afternoon.

The Reds took the lead in the Premier League 2 contest after 18 minutes through Leighton Clarkson's fine finish, despite having Morgan Boyes sent off early on.

Jake Wakeling equalised for Leicester on the stroke of half-time, before Ben Woodburn then went up the other end to make it 2-1 with a penalty in first-half stoppage time.

But Barry Lewtas' side were made to settle for a point in their penultimate fixture of the season when Kasey McAteer fired in midway through the second period.

As both teams searched for a winner, Liverpool substitute Tyler Morton was also dismissed with seconds remaining. 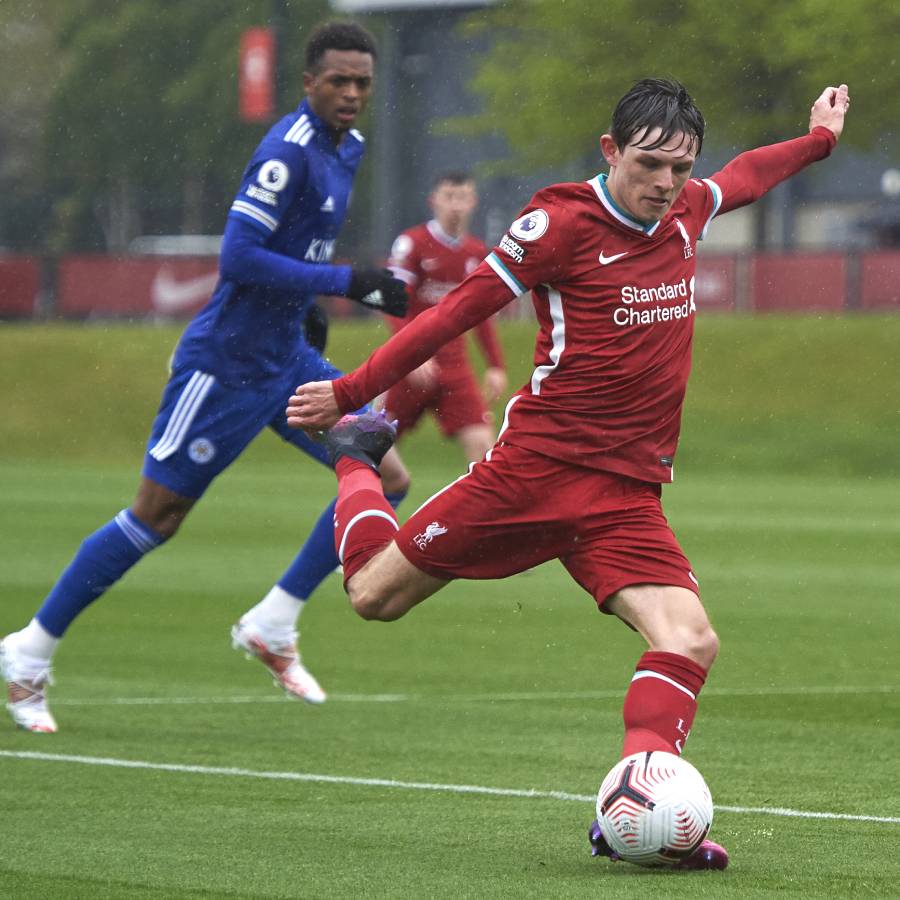 The complexion of the game, played in extremely rainy and windy conditions, changed when the first red card was brandished.

Elijah Dixon-Bonner gave the ball away to Thanawat Suengchitthawon, who then played a through ball that allowed Wakeling to charge towards goal. Boyes brought down the Leicester No.9 with a sliding challenge near the 18-yard box – one the referee felt denied a clear goalscoring opportunity.

The visitors looked to make their advantage count, though Tyrese Shade couldn't connect properly with Khanya Leshabela's cross when free inside the box. Liverpool took full advantage of that let-off to break the deadlock.

Moments after Leicester's first chance of the contest, Clarkson slid on the wet surface to meet and poke Paul Glatzel's whipped cross into the far corner. 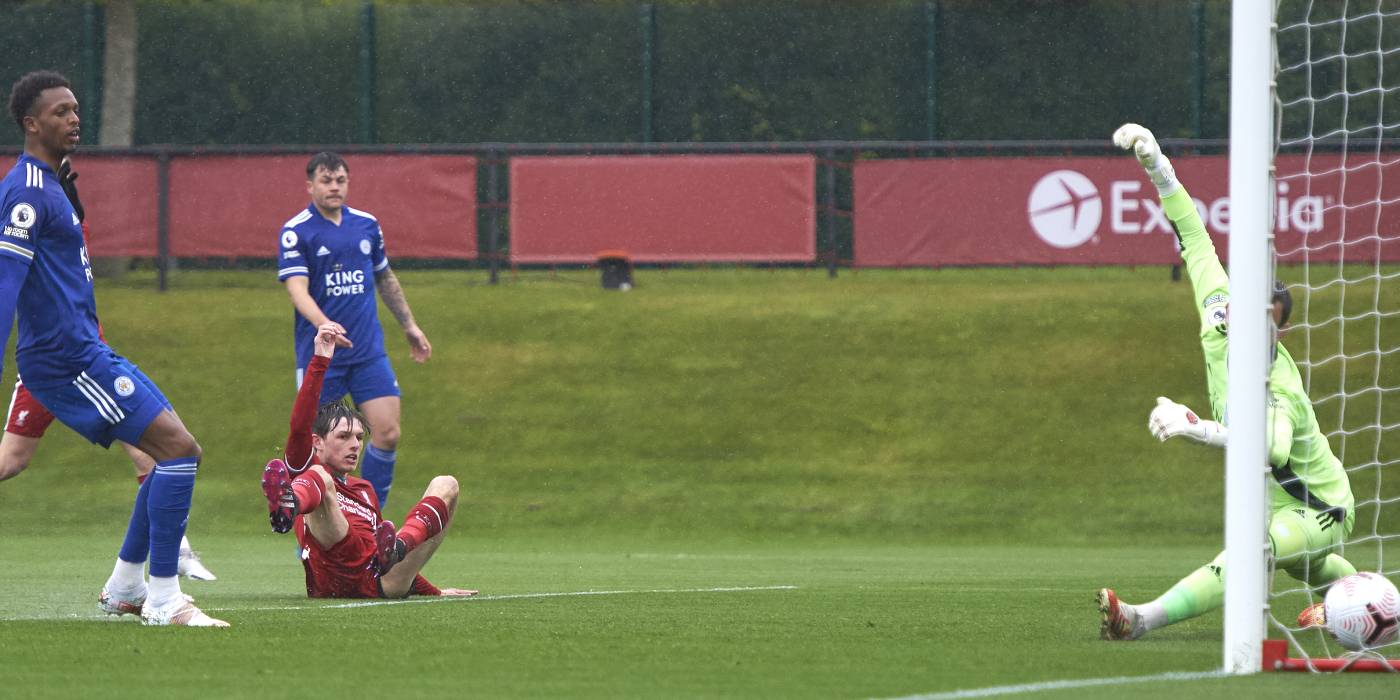 There were opportunities to double the lead but the Reds were denied by vital interventions from Mitchell Clark and goalkeeper Jakub Stolarczyk.

The first half then closed out with frantic end-to-end action.

Leicester equalised when Wakeling tapped in from a rebound, after Jakub Ojrzynski had initially done brilliantly to deny McAteer. But it was only 1-1 for a matter of seconds.

Luis Longstaff burst down the right wing and clipped in a ball towards Glatzel inside the box. Just as the Liverpool striker appeared to be meeting the cross, he was clattered into by Vontae Daley Campbell.

A penalty was awarded and Woodburn calmly dispatched it to give his side a lead to take into the interval. 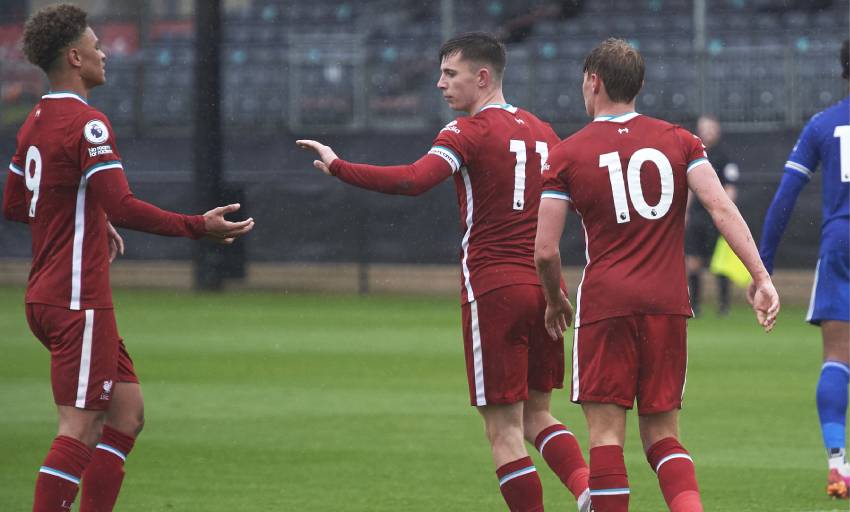 On the hour mark, Clarkson could have bagged his second of the game but fired over after the goalkeeper had pushed out Owen Beck's cross to a central area. Leicester capitalised and restored parity five minutes later.

McAteer impressively fired a volley into the back of the net from Shane Flynn's ball into the box, leaving Ojrzynski with no chance.

Then, Dixon-Bonner made a vital block to divert Suengchitthawon's goalbound shot behind for a corner.

Though down a player, Liverpool's intentions to win the match were made clear when striker Joe Hardy was introduced for the final 10 minutes.

However, Leicester were inches away from taking all three points in the 89th minute. Suengchitthawon looped a header onto the crossbar, with Iestyn Hughes' follow-up effort also striking the woodwork and bouncing clear.

Morton received his second booking deep into stoppage time when he kicked the ball away, but the referee's final whistle soon followed.