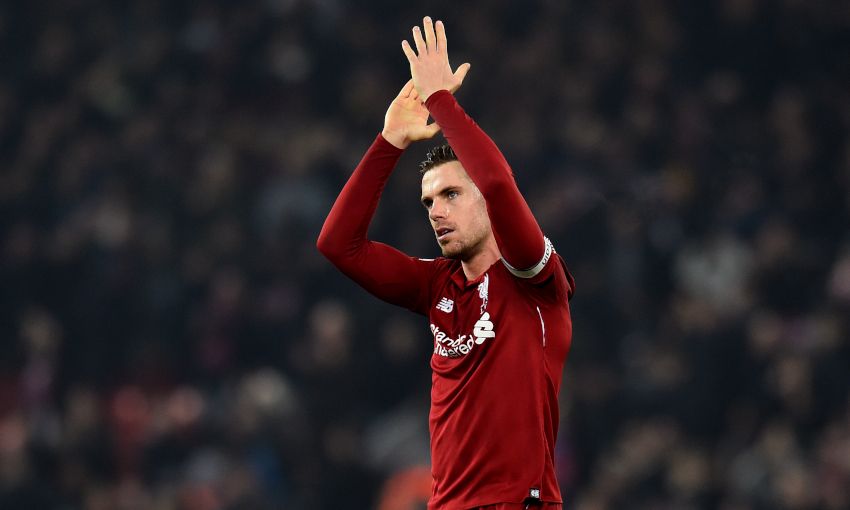 Mohamed Salah scored twice as Liverpool fought their way back from a goal down to beat Crystal Palace 4-3 at Anfield on Saturday.

Roberto Firmino and Sadio Mane were also on the mark on a dramatic afternoon that saw the Reds again strengthen their position at the top of the Premier League.

The scenes after the final whistle spoke volumes. A pumped up Jürgen Klopp embraced his captain before delivering a flurry of fist pumps in front of the Kop and beating his chest. Anfield let out a collective roar. Liverpool had emerged unscathed from a rollercoaster afternoon to move seven points clear at the top of the Premier League table. There were more twists and turns than a Hollywood blockbuster as the Reds overcame a major scare to keep their title charge on track. You could hear the groans coming from Manchester. On the day when Liverpool honoured the legendary Bob Paisley, Klopp's side also delivered a nod to the past. This was a throwback to their previous guise when they were potent going forward but horribly vulnerable at the other end. When the pressure was cranked up, they refused to buckle. Instead they stood tall and showcased their powers of recovery. The character and hunger of this side is just as impressive as their quality and work ethic. Captain Jordan Henderson led by example as he thundered into tackles with Milner and Andy Robertson equally combative.

It is often said that difficult moments are when you find out whether teams are truly great or not, and Klopp could not have asked for more from his players on a tricky day at Anfield. To their great credit, Palace provided the sort of test that the Reds have not seen much en route to the summit of the Premier League with 23 games gone. But, no matter how many blows they landed across the 90 minutes, Hodgson's men could not extinguish their hosts' belief, or their desire to claim another crucial three points. Liverpool's watertight defence has been crucial to their brilliance this season but, when that failed, they possessed the character to find another way to win. That bodes incredibly well for their chances of sustaining a title charge until May.

You never thought it would be straightforward, did you? Liverpool are seven points clear at the top of the Premier League, but boy did they suffer to get there! Anfield had forgotten what a Klopp rollercoaster felt like, but they got a thrilling, terrifying reminder here. This was a throwback to days gone by, heavy metal football, organised chaos and all that. Crystal Palace, 14th in the table, gave the league leaders the fright of their lives. The noise which greeted the final blast of referee Jon Moss' whistle said everything. This was a victory to be enjoyed, at the end of an afternoon to be endured. At the end, Klopp made his way down to the Kop. A clench of the fist brought a guttural roar from English football's most famous stand. He knew how important this was, and so did his supporters. "Someone asked me the main feeling, the main emotion, at the final whistle," he said. "It was relief." Early in his reign, a defeat here to Palace left him "feeling pretty lonely" as fans gave up on their team as they toiled, but things have changed dramatically since then. Now, there is a perfect harmony, from the stands to the field. The faith is there, and so is the belief. Nobody was leaving this game early. But the long and the short of it is simple; Liverpool remain in the driving seat, and passed yet another examination of their championship credentials. They've won 19 of their 23 league games so far; 14 more victories will end that long, painful wait for a league title, no matter what happens elsewhere.

They lined up at half time with more title medals amongst them than probably any group of men in Liverpool's history. Talk about timing. Just when Klopp's modern day stars most needed inspiration and a reminder that you have to dig deep to win the most prized trophy in English football, the heroes of Liverpool's glorious past took their place in the centre circle at half time. Kenny Dalglish, Phil Neal, Graeme Souness, Terry McDermott, Ian Callaghan, Jimmy Case, David Fairclough and more. If any Kop stars know how to win a title it's them. They were at Anfield to honour the 100th birthday of former managerial legend Paisley, no stranger to winning the big prizes himself. And their presence proved a divine intervention of sorts as Klopp's men responded to a hitch in their title plan exactly the way the legends of yester-year did all those seasons ago. With guts, determination, belief and, on this occasion, the handy slice of luck all teams need on the long road to glory. But when you have Salah in attack anything is possible – even on the off days. It's hard to think of fresh superlatives for Salah who is back to his best and making the decisive contributions just when Liverpool need him most.

The press on Palace 1-2 LFC: 'Mane of enormous importance'