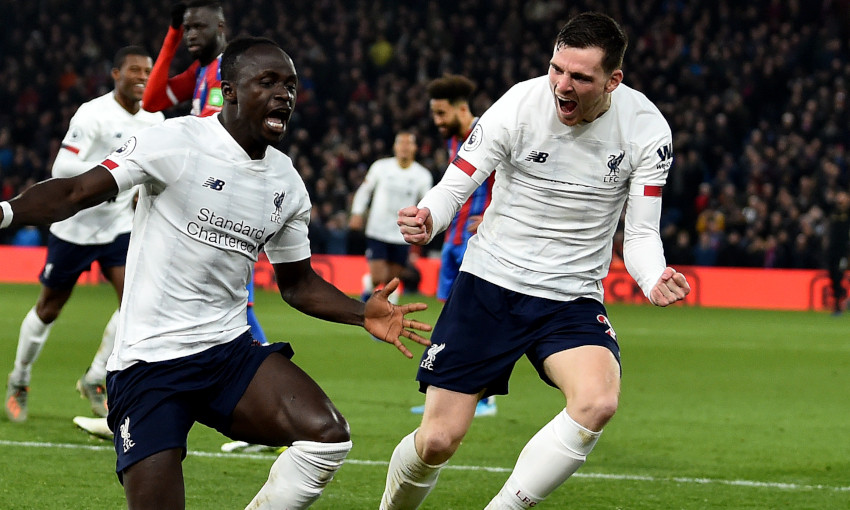 Sadio Mane and Roberto Firmino were on the mark as Liverpool secured another important victory as they edged out Crystal Palace 2-1 at Selhurst Park on Saturday.

The dramatic victory saw the Reds maintain their eight-point lead at the top of the Premier League.

If Liverpool are intent of launching their Premier League title challenge this way, then Reds fans better strap themselves in for the next 25 nail-biting games. The questions keep coming, but the answers are being found. Since that 2-1 defeat to Manchester City back in January, Liverpool have won a remarkable 25 of their 30 games without defeat. A total of 80 points have been amassed since. Klopp's Liverpool are breathing rarefied air. It's now 37 points from a possible 39 on offer and there's still a pervading sense that the Premier League leaders are yet to get anywhere near top gear. What a tantalising prospect that must be for Jürgen Klopp and his players to know as their season enters a potentially defining period over the next five weeks.

Liverpool are a fabulous, thrilling, football team in full flow. All controlled aggression, relentless pace, viscerally incisive attacks, loosely organised chaos. But the reason they're eight points clear at the top of the Premier League and holding steady on their course for a first title in 30 years is that they're more than that. They don't have to be in full flow to win. They're winning games scruffily, calmly, luckily. Through sheer force of personality, through skill, through brilliant goals. By taking full advantage of mistakes, by calmly taking control of games, by just refusing to give up. By any means necessary, in short. This was their seventh success by one goal this season, with six of their past seven victories coming by that margin, three of which came thanks to goals after the 85th minute.

Mane loves a goal against Crystal Palace. He did, in fairness, look the Reds’ most likely source of danger in a largely poor first half, and it took him only a couple of minutes to make good on his threat after the break. One quick run through the centre should have yielded the opener, only for Mane to fire wide, before he awkwardly half-volleyed home just two minutes later. It was his fifth goal in as many games against Palace, and his eighth league goal of the season overall – an indication of his continued enormous importance to the team. Without Mohamed Salah’s penetrating runs and scoring ability, Mane was even more crucial here and few away players gave much indication of being able to find a way through Palace’s back line.

The media on LFC 4-3 Palace: 'Henderson led by example'