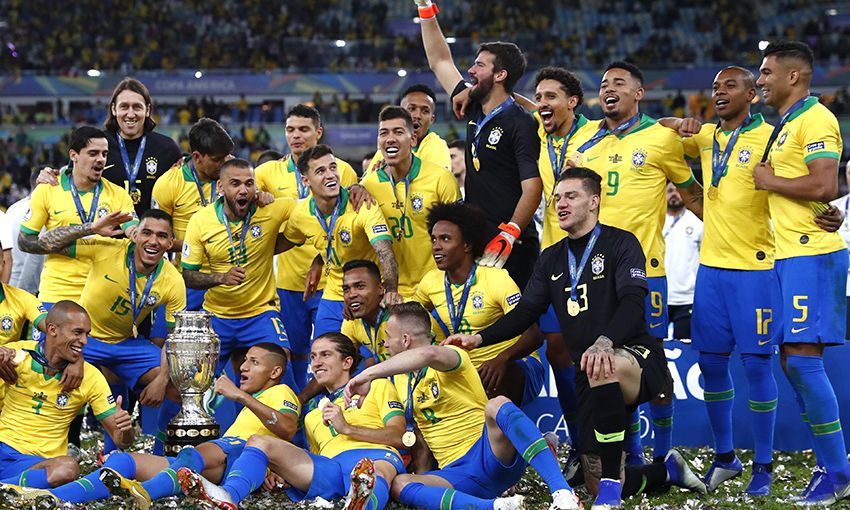 Alisson Becker and Roberto Firmino won the 2019 Copa America with Brazil on Sunday and added their names to a growing list of Liverpool players to boast international honours.

The Reds duo both started the final as tournament hosts Brazil beat Peru 3-1 at the Maracana to secure their first major honour for 12 years. 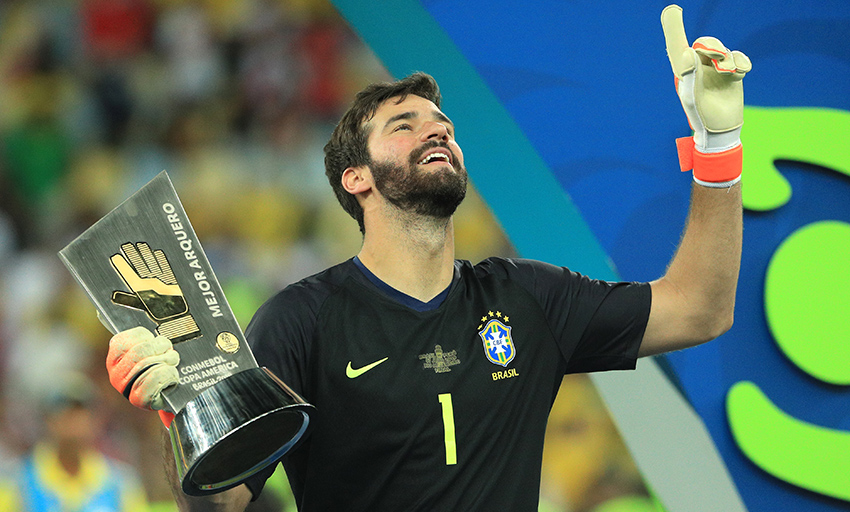 Firmino and Alisson played in all six of Brazil's matches at the Copa, with the forward scoring twice and the goalkeeper claiming the competition's golden glove award after keeping five clean sheets.

The pair are the latest names to join the list of Liverpool's international champions that stretches back more than 100 years... 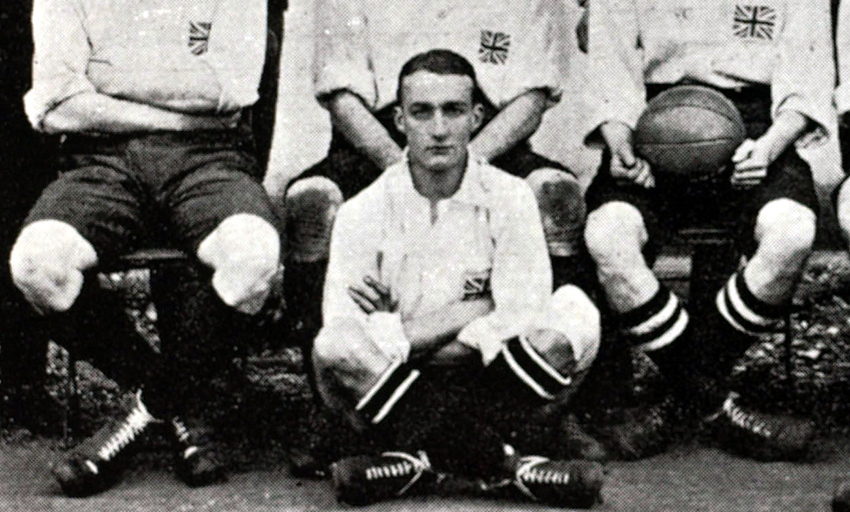 Liverpool-born winger Arthur Berry made his debut for the Reds just four months before going on to win gold with Great Britain at the 1908 Olympics in London.

The Olympics represented the pinnacle of the fledgling international football circuit for three decades until the World Cup came along in 1930.

Team GB won the first ever Olympic title in 1900 and eight years later Berry would help his country win their second.

The future FA Amateur Cup winner scored in a 12-1 win over Sweden and contributed to a 4-0 win over Netherlands and 2-0 triumph over Denmark in the final at White City Stadium.

Son of former Liverpool chairman Edwin Berry, Arthur left his home-town club to join Fulham in 1909, moved to Everton in 1910 and then rejoined the Reds just days before heading off to Stockholm to compete in the 1912 Olympics.

Captain of Denstone College rugby team during his youth, Berry proved his switch to football was the right decision when he claimed a second gold medal with his country.

Team GB beat Hungary 7-0, Finland 4-0 and once again beat Denmark in the final, this time 4-2, to claim the Olympic title in Sweden.

Berry left Liverpool again later that year and would go on to claim the FA Amateur Cup, the only honour of his club career, with Oxford City in 1913. 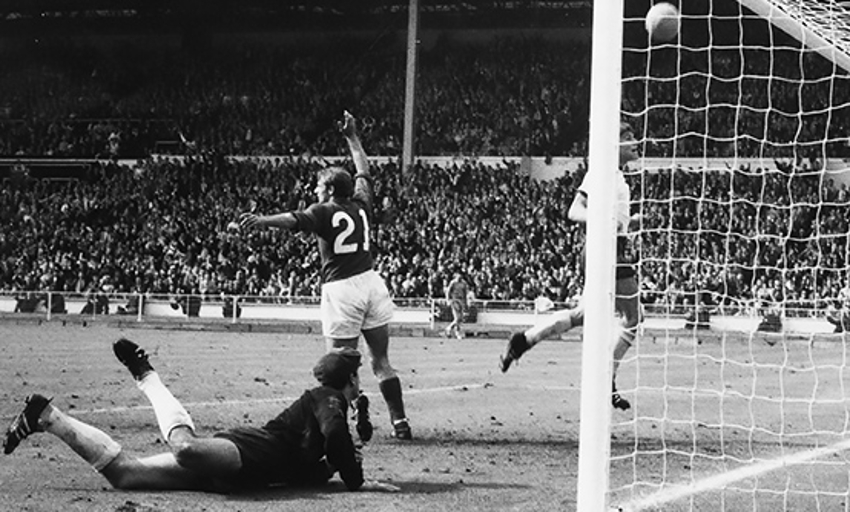 England would go on to win the Jules Rimet trophy and Hunt played in every game, scoring three goals on the way to the final.

Callaghan, who played in England’s 2-0 group victory over France, and Byrne didn't receive winners’ medals at the time as FIFA's policy of honouring all members of the winning squad didn't come into force until 1978.

However, in 2007, world football's governing body back-dated their current protocol and issued medals to Callaghan and Byrne, along with every player that featured in a winning World Cup squad since the inaugural final in 1930.

In the 1966 showpiece, England beat West Germany 4–2 in extra time at Wembley, with the Three Lions' controversial third goal, Geoff Hurst's shot that was adjudged to have gone in off the crossbar, the subject of debate ever since - did it cross the line?

Hunt was the closest England player to the incident and his reaction (pictured above) is proof it did, according to Hurst.

"Roger Hunt wheeled away shouting 'Goal!' when his striker's instinct would have been to make sure if he thought it hadn't gone in," Hurst has always insisted.

"That's good enough for me." 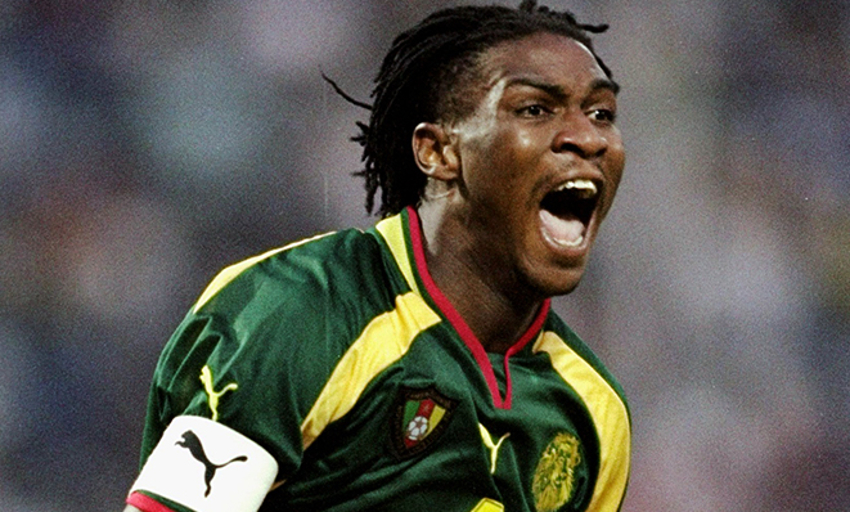 Cameroon defender Rigobert Song joined Gerard Houllier's Liverpool in January 1999 and left in November 2000 having made 38 appearances for the Reds. But while his Anfield career may not have been particularly notable, his international career with the Indomitable Lions certainly was.

Made captain of Cameroon's U20s at just 16, Song played at World Cup USA 94 as part of Henri Michel's senior squad by the time he was 17. When he joined Liverpool, aged 22, the defender had another World Cup, France 1998, on his CV.

It was during his time at Anfield that Song won his first international title: the 2000 African Cup of Nations.

As captain of Pierre Lechantre's Cameroon, Song guided his team to the final and a mouth-watering clash host nation Nigeria in Lagos.

Samuel Eto'o and Patrick M'Boma put the Indomitable Lions 2-0 up before Nigeria fought back to eventually force a penalty shootout.

It was suitably dramatic, with Victor Ikpeba's fourth spot-kick for Nigeria controversially ruled out (TV replays suggested the ball crossed the line) before Song stepped up to slot home the winning penalty.

The skipper would go on to successfully defend the AFCON title in 2002, play in another two World Cup tournaments and retire as Cameroon's most capped player ever, with 137 appearances. 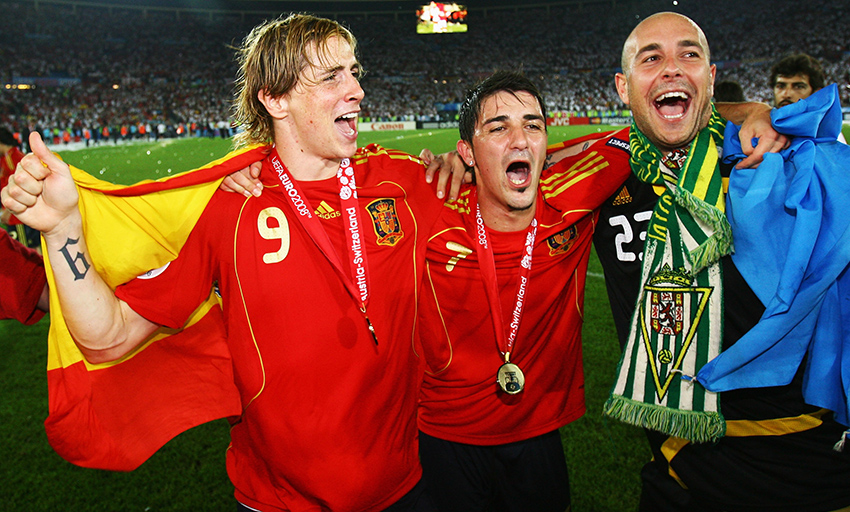 After La Liga-winning Spanish manager Rafa Benitez arrived at Anfield in 2004, several players from his homeland followed in the years to come.

By the time Luis Aragones' Spain squad headed to the 2008 European Championship, four of his team plied their trade on Merseyside.

Goalkeeper Pepe Reina, playmaker Xabi Alonso and defender Alvaro Arbeloa all boarded the plane to Austria-Switzerland, but it was perhaps Fernando Torres who was the headline act.

Torres recorded the most prolific debut season by an overseas player in England by netting 33 times for the Reds in 2007-08.

It was in this sensational form that the LFC No.9 headed to Euro 2008. Torres set up David Villa to score Spain's opening goal of the tournament against Russia and then scored himself against Sweden as La Roja steamrolled on to a final showdown with Germany.

Alonso, Arbeloa and Reina all featured as Spain went through the tournament unbeaten and then dominated at the Ernst-Happel-Stadion in Vienna, but the match was eventually settled by a single goal from the boot of Torres.

Latching onto a through pass from Cesc Fabregas, the striker outpaced Philipp Lahm and lifted a shot over advancing goalkeeper Jens Lehmann to convert what appeared a half-chance into a match-winning goal. Torres had fired Spain to their first major honour since 1964. 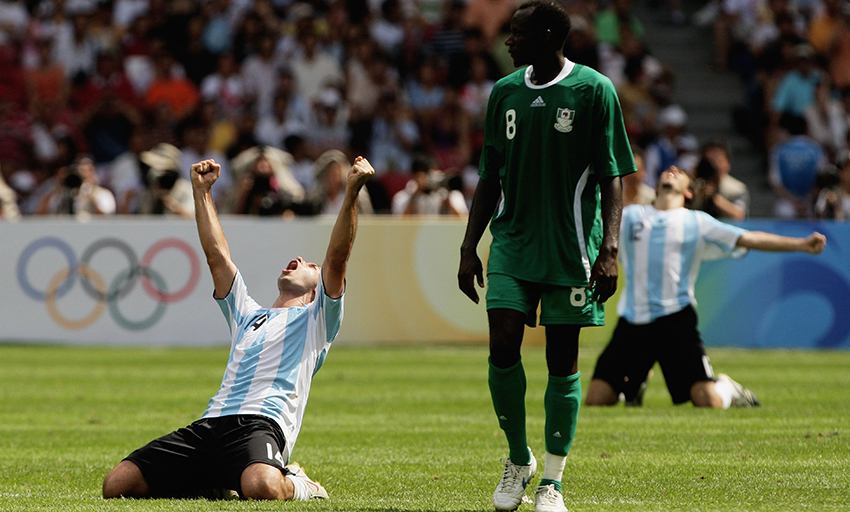 In 2008, Javier Mascherano made Olympic history. But he had to miss the opening games of Liverpool's 2008-09 season to do so.

Called up to Sergio Batista's Argentina squad for the Beijing Olympics, Mascherano was a rare survivor from the team that had won gold four years earlier in Athens and the combative midfielder was desperate to defend the title.

His inclusion as one of three over-age players in the Albiceleste's 18-man party, which also featured Lionel Messi, Sergio Aguero and Juan Roman Riquelme, meant he would miss two Champions League qualifiers and two Premier League matches for the Reds, should Argentina reach the final.

When Mascherano eventually returned to Anfield, he did so as the only Argentine footballer ever to win two Olympic gold medals.

Angel Di Maria's 58th minute strike in front of 90,000 fans at the Bird's Nest Stadium was enough to secure a 1-0 win over Nigeria in the final - the same scoreline by which Argentina had beaten Paraguay in the final Athens. Mascherano was the only player to feature in both showpiece matches. 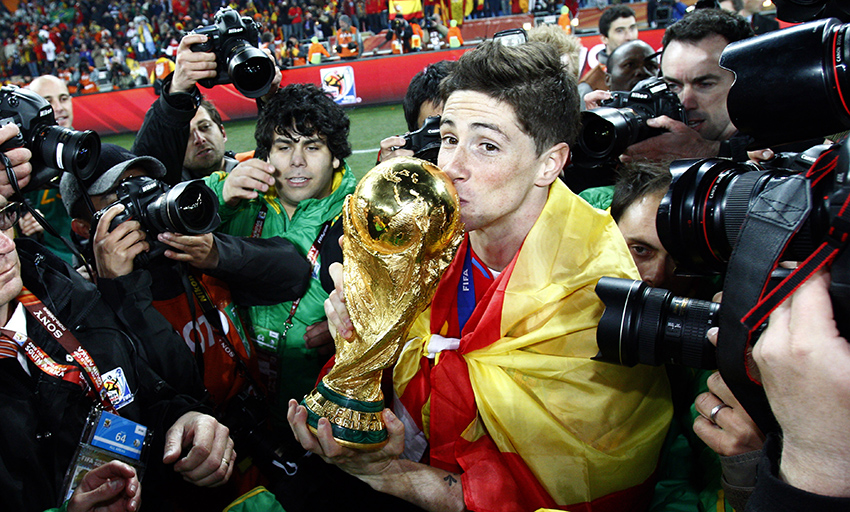 Torres ended the 2009-10 season as Liverpool's top scorer for the second time in three years, netting 22 in 32 games across competitions despite an injury-hit campaign.

The LFC No.9 was ruled out for the season in mid-April as he required knee surgery but after being closely monitored by Spain boss Vicente Del Bosque was still included in his final 23-man squad for the 2010 World Cup in South Africa.

Confident he could rehabilitate the striker in time for the finals, Del Bosque handed Torres his first match minutes for two months in a warm-up match against Poland and then introduced Torres from the bench in Spain's opening game of the finals - a 1-0 loss to Switzerland.

He was back in the starting line-up for the next Group H match - a 2-0 win over Honduras - and despite not performing at the peak of his powers Del Bosque stuck with Torres throughout the tournament.

The Reds striker featured in every match as Spain despatched Chile, Portugal, Paraguay and Germany before beating Netherlands 1-0 in final to claim their first ever World Cup.

Torres was again joined in national squad by fellow Red Reina, although the goalkeeper did not feature on this occasion.

The pair also picked up winners medals at Euro 2012, but LFC keeper Reina remained on the bench for the tournament while Torres had departed for Chelsea in 2011. 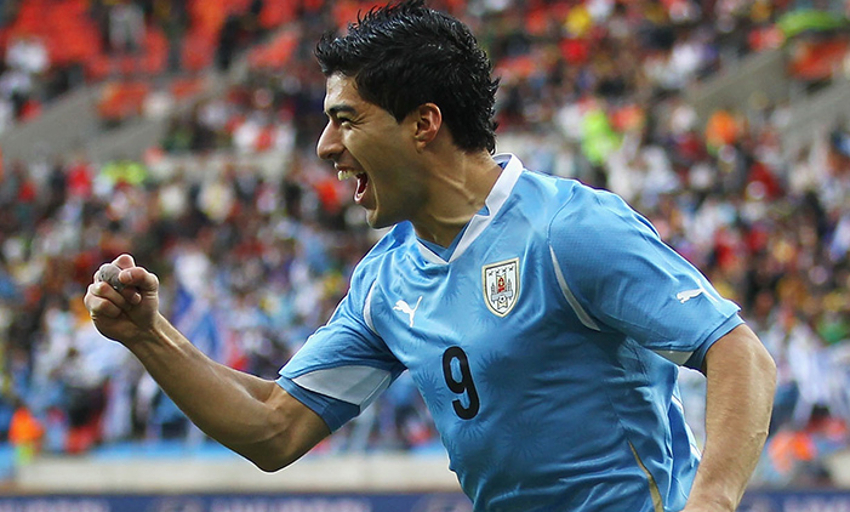 Signed from Ajax in January 2011, Luis Suarez was one of Liverpool's best players during his partial campaign at Anfield.

And by the time he returned to Anfield to begin his first full season, the striker had won the 2011 Copa America with Uruguay and been named Player of the Tournament.

The LFC No.7 made an immediate impact at the tournament in Argentina, scoring in Uruguay's opening game to secure a 1-1 draw with Peru.

He scored the winning penalty in a quarter-final shootout with hosts Argentina and then netted both goals in a Man of the Match performance as La Celeste beat Peru 2-0 in the semi-final at the Estadio Ciudad de La Plata.

The final would be played in Buenos Aires against a Paraguay side that had not won a game in the tournament - drawing all three group games and going through the knockout stages via penalty shootout victories.

But the stubborn Paraguay side proved to be no obstacle for Suarez, who fired low into the far corner to opening the scoring and then provided a brilliant headed assist for Diego Forlan to score his second goal in the 3-0 win.

Toure's redemption at the 2015 AFCON 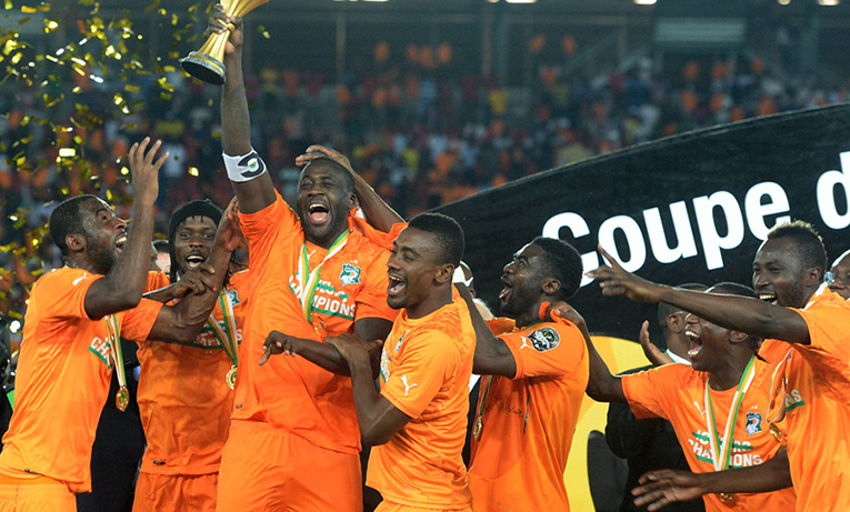 Kolo Toure reached two finals with Liverpool - the League Cup and Europa League - and was unlucky not to win a trophy during his time with the Reds. It was a theme echoed with his national team Ivory Coast, but all that changed at the 2015 African Cup of Nations.

The Reds defender, now 33 years old, announced prior to the tournament that it would be his last hurrah for Les Elephants. His seventh appearance at the AFCON finals would be his last. He would retire from international football after its conclusion.

The Liverpool man had come close to winning it in the past: Ivory Coast reached the final of the 2012 edition but Kolo, and Gervinho, missed penalties in the shootout and the title went to Herve Renard's Zambia.

Renard was now coach of Ivory Coast and the Frenchman played Toure in every game as they marched to the final in Equatorial Guinea, where they would face Ghana.

It was an incredibly tight match. After 90 minutes in Bata, the two sides could not be separated and it remained goalless through 30 minutes of extra-time. The regulation penalty shootout couldn't even provide a winner and the game plunged into sudden-death spot kicks.

Toure had been in this territory before. He'd missed in 2012, but, with the score level at 4-4, he made no mistake here.

The shootout continued all the way through to the goalkeepers, when Boubacar Barry saved Brimah Razak's spot kick and then netted his own to secure victory.

Toure's final kick of the ball for Ivory Coast had helped them win only the second AFCON title in their history.