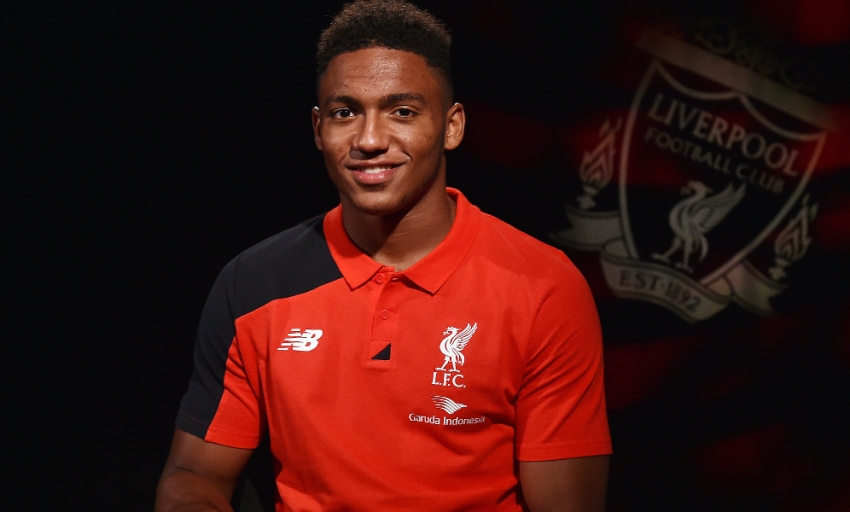 Joe Gomez exclusively explained why he considers Liverpool the ideal place to continue his rapid development after the defender sealed a permanent switch to Anfield today.

The 18-year-old joins the Reds from Championship outfit Charlton Athletic following a breakthrough season in which the England youth international played 24 senior games.

Once the ink was drying on his contract with the club, Gomez declared the decision to make the move and work under Brendan Rodgers' guidance an easy one.

Speaking to Liverpoolfc.com, he also outlined his determination to learn from the experienced pros already here and quickly compete for a starting berth.

Read on for a full transcript of Gomez's first LFC interview, while LFCTV GO subscribers can click play on the embedded video below to watch the whole chat.

Joe, welcome to Liverpool FC - how does it feel to have joined the club?

It's a dream come true. It's a bit surreal and it hasn't really hit me yet. But I'm buzzing and just excited to get started.

Talk us through the last couple of days and weeks as this transfer has become a serious prospect...

I've known for a little while now and I've wanted to come here for a while as well. But as it has become more of a reality over the past few days and weeks, I've just been buzzing. I just wanted it to get done.

It sounds like it was an easy decision for you, but did you speak to your family about moving up to Liverpool?

All the close people around me - my mum, my dad, brothers and sisters and all my family - have been really supportive. They knew I really wanted to come here and they have backed me all the way. So it was an easy decision.

It all seems to have happened so fast for you - you only celebrated your 18th birthday last month and now you're at Liverpool...

The whole season really, from pre-season and getting to play there, then having the opportunity to come somewhere like this, has been amazing. I'm really enjoying it and I hope it keeps going from here.

The club has been following you for a while, tracking your progress. That must give you confidence right from the off in terms of settling in here?

Definitely. It's flattering to know that a massive club like this were interested in me. That was one of the main things - I knew how great the club is. That's why it was an easy decision to come here. To know that a place like this was interested and knew about me was great.

What were the key factors then, because there was a lot of speculation about clubs at home and abroad being interested in you - why was it Liverpool that you wanted to come to?

The club has got great history and it's a great club, and one that I've always been following from when I was young. The style of football and the top players here was somewhere that I wanted to go and get better and learn, and play good football. It was an easy decision.

Brendan Rodgers has regularly given chances to young players since he has been the manager. Was that a factor in your decision as well?

Yes, 100 per cent. Being a young player, I know that opportunities can be slim sometimes. But under a manager like Brendan, it speaks for itself. That's why I was really keen to come here and play under him.

Have you had a chance to speak to him yet?

I have met him once and he seemed really nice. It made me want to come here even more really. He just told me how good it is here and how he thinks he can help me get better, the opportunities I would get - things that would make me want to come to Liverpool.

For any fans who may not have seen you play, tell us what your skills are as a defender and what kind of player you are...

I like to think I'm a ball-playing centre-back who likes to be physical and has got a bit of pace. I'd like to say I'm a leader as well.

You're comfortable at centre-back and right-back. Have you got a preference and where do you see yourself in the long-term?

I made my debut and started playing at first last season at right-back. I really enjoyed it there because I like to get forward. But I definitely see myself as a centre-back, I feel more comfortable there and enjoy it there. So in the long-term, hopefully centre-back.

You have cited Rio Ferdinand as someone you have watched as a youngster. Have you tried to model yourself on that kind of ball-playing defender?

Definitely, he has been a great model. But just generally good defenders; coming up in that era, Jamie Carragher and even further back, Sami Hyypia. The history here speaks for itself.

You're stepping up from the Championship to the Premier League, after making 24 appearances last season. Do you think the competitive nature of that league will help you make the step up?

Yes, hopefully. The Championship has been a key part of my development; the physical aspect and how competitive it is has really helped me. I know the Premier League is obviously a step up but hopefully I can take it in my stride. I know the tempo and the aggression might be a bit higher, but I'm ready to learn and I'm sure training with quality players at Liverpool now is only going to help me get better. So I'm looking forward to it.

You'll need time to settle at a new club, of course, but do you think you're ready to compete for a place straight away?

Definitely, that's my aim. I want to come in and challenge and be involved. But I know that there's top-quality players and the centre-backs and defenders already here are great. I'd like to come in, do my best and learn from them.

There's plenty of experience in the Liverpool defensive ranks at the moment, in the likes of Kolo Toure and Martin Skrtel. What are you looking to learn from them?

They have had great careers. I'll be looking at them to get tips and learn from them about defending and being a defender. I'll just take it all on board. I'm willing to learn.

Have you had chance to allow yourself to think what it's going to be like when you step out at Anfield for the first time?

I can imagine how great the Kop is but I don't think anything would compare to actually doing it. That's something I look forward to, definitely.

Finally, what are your short-term aims and long-term ambitions at Liverpool?

To get involved in the team and challenge for a place. And make my debut as soon as possible. Long-term, to be a key part of the team and win trophies.

Joe Gomez on pre-season: 'It's a fresh start'