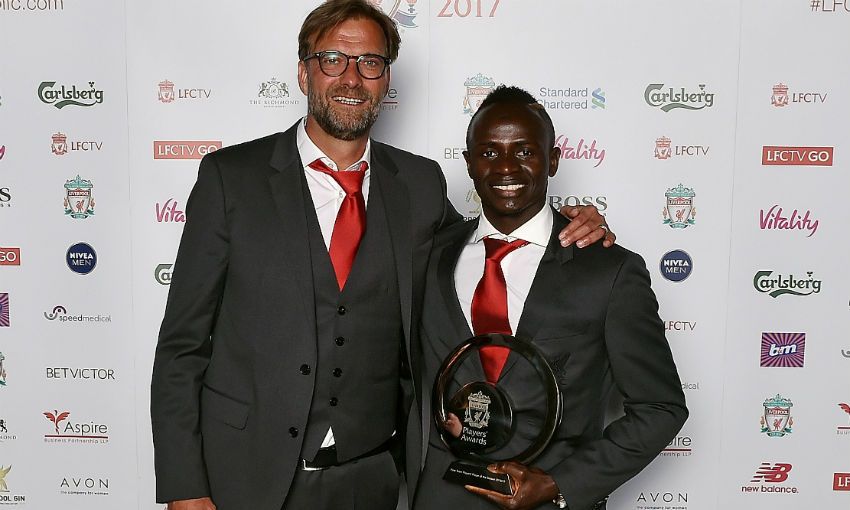 Sadio Mane revealed he is set to take a step forward in his rehabilitation from injury next week as he outlined his pride at scooping a double at the 2017 LFC Players' Awards on Tuesday night.

The forward’s season was ended by the knee problem sustained against Everton on April 1, which subsequently required surgery.

However, Mane revealed he is in line to begin running again at Melwood next week as he continues his recovery programme.

“Hopefully next week I will start running, jogging, so I am happy and looking forward to it.”

The Senegal international fired 13 goals in 29 appearances in a sensational debut campaign for the Reds following last summer’s switch from Southampton.

“It is a big honour for me to win these trophies, especially with all of the great players in the dressing room,” said Mane. “I want to thank everybody, all the fans who have voted for me, and I’m very happy.

“[The Players’ Player of the Season award] means so much for me because it is the players in the dressing room who voted for me and I want to thank them. I have been learning a lot from the manager, the coaches and my teammates. That’s been the key.”

Mane will be watching on as his teammates attempt to secure a top-four finish in their final two fixtures of the season with West Ham United and Middlesbrough.

And the 25-year-old is confident Liverpool will be playing Champions League football next season.

“This league is a very hard league, but we have a great team and great players,” he said. “We are capable of beating every team in the league.

“We have two important games. We must not make big pressure for ourselves, but we can beat them.”