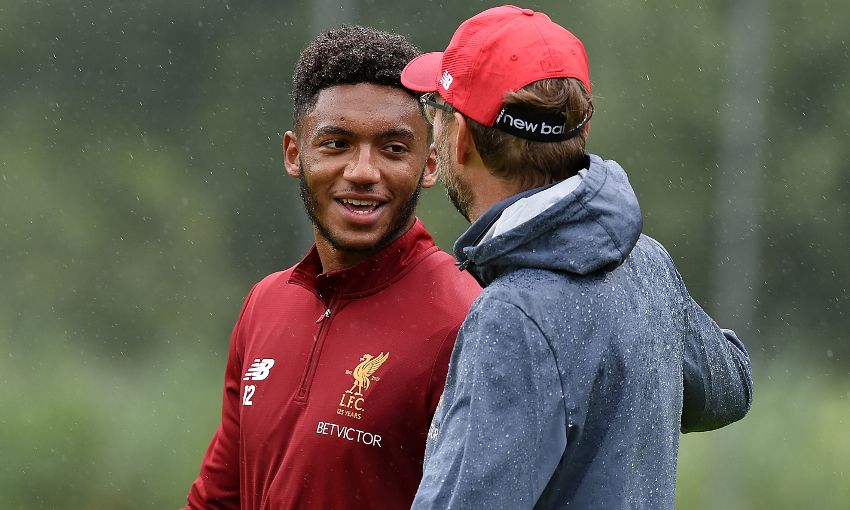 As Jürgen Klopp marked two years at the Anfield helm on Sunday, Joe Gomez has explained why he is indebted to the manager for the support and guidance he provided him in overcoming his injury frustrations of his tenure.

The defender suffered a season-ending anterior cruciate ligament injury just days after the German’s appointment in October 2015 which kept him out of action for over a year.

Gomez took the first steps to a full recovery in January of this year when he made his comeback in an FA Cup tie with Plymouth Argyle. He added a further two appearances to his tally before the conclusion of 2016-17.

This season, and back to peak condition, the England U21 captain has so far ran out for the Reds eight times in all competitions – and he believes the backing he’s received from Klopp over the past couple of years has been invaluable in helping him reach this stage.

Gomez told LFC Magazine: “He has been great for someone like me going through an injury like that and then coming back. For him to be able to bed me in and speak to me at the same time has been ideal, and it’s made it a lot easier for me in comparison to how it could have been.

“He did his ACL previously, so there was that similarity in that he understands what it’s like to go through something like that and also know that when you come back things might not be quite the same. He understood the procedure and what was going on.

“With him I think it’s about the individual connection – it’s more than just about speaking to you as manager-to-player. There’s an emotional connection there and it makes you want to play for him and for the club. He takes time out for you and I think he’s aware of everyone’s feelings. He’s able to assess how people are feeling and is able to speak to them like normal people.

“Of course when you get players who are not playing in the team, they are not going to be happy. But he is able to take that side out of it and just speak to you in a straightforward way. As I say, it makes you want to play for him. If you spoke to all of the lads in the dressing room, everyone has such a desire and passion to play for him and that only works best for the players and the team.

“I want to play for him and for the club and try to put [the injuries] behind me. I’m thankful for the opportunities that he has been giving me. When I was out, he was someone I was always dreaming of playing for, but the timing was difficult and I didn’t get the chance. Now I’m just thankful and want to keep taking it in my stride.”

Joe Gomez: It was a massive honour to be Liverpool captain