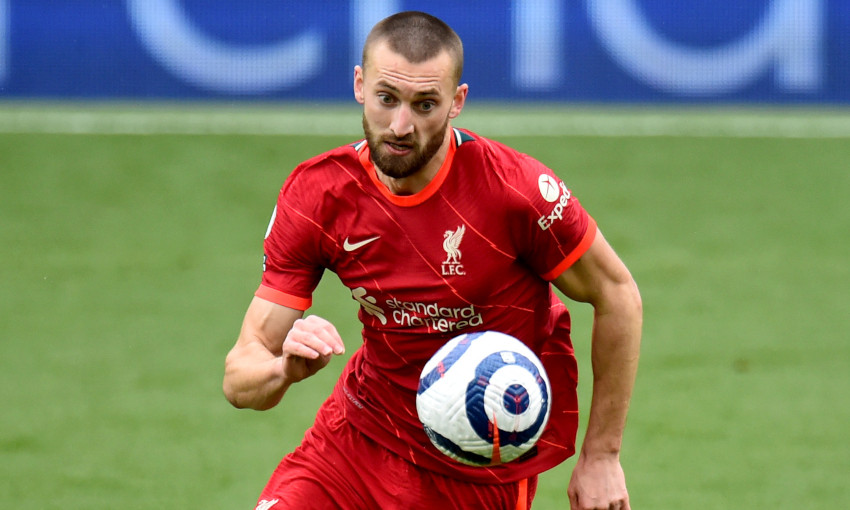 Nathaniel Phillips will continue to relish the competition for places at Liverpool in the knowledge he has earned Jürgen Klopp's faith.

After coming close to leaving the club last summer, Phillips was thrust into a regular starting position in the Reds side in 2020-21 following the long-term injuries to Joe Gomez, Joel Matip and Virgil van Dijk.

The No.47 rarely put a foot wrong as he stepped up in unexpected circumstances, making 20 appearances, scoring a big goal in the penultimate game of the season, and producing a series of vital performances to help Klopp’s men clinch Champions League qualification with a third-placed finish.

“Virgil’s injury was horrible for him and horrible for the club as well,” Phillips, who took third place in the vote for the Reds’ Standard Chartered Men’s Player of the Season, told the Liverpool Echo.

“It’s never nice seeing a player getting injured, but in my case it meant they needed to rely on another centre-back and that’s how I got my opportunity.

“I was grateful to have the opportunity, to be in that place at that time, that I was the guy they had to turn to in the injury crisis. There were previous occasions where I might have got opportunities but had injuries myself so was unavailable, but this time I felt I was in a decent place, having come back from my loan spell at Stuttgart, to seize my opportunity.

“There was pressure because of the level that is expected of any Liverpool player. Not only that, Virgil is the best centre-back in the world and you’re getting compared to him and whether you can do the same job he does for Liverpool.

“But I was just excited to be getting an opportunity to play for Liverpool in the league and to be playing football again in a first team.”

The 24-year-old continued: “At first I was just doing a job and filling in. I was more than happy to do it but you want to be adding value and helping the team out.

“In my first few games, I was just making sure I got through the games, did my job and didn’t slip up to ensure it wasn’t noticeable that someone who wasn’t a regular was playing.

“That was the aim at the start, just to swim. But as the season went on, I felt more responsibility and more confident and it felt like I could add a bit of value and bring something.

“The manager’s done so much for me and the opportunities he’s provided me with, I’m so grateful that he saw something in me and went out of his way to work on that and do whatever he could to help me achieve as much as I can.

“I will forever be grateful to the manager for that. The only thing that has changed is my role in the squad at the end of the season being different to what it was before, so maybe he has to rely on me more than he ever used to and hopefully he now feels he can place all of his faith in me when I’m playing on the pitch.”

Having added Ozan Kabak and Ben Davies to the defensive ranks at the start of the year, in a loan deal from Schalke 04 and a permanent move from Preston North End respectively, Liverpool dipped into the transfer market again last month.

An agreement with RB Leipzig to bring Ibrahima Konate to Anfield was announced, with the France U21 international to join on July 1 subject to international clearance and a successful work permit application.

“It’s no surprise,” said Phillips. “Liverpool is a huge club and they are always going to have huge competition for places. You always have to compete for your place in the team.

“Even though there is a lot of competition, I see it as another person to try to learn from; a new person’s game I get to see up close, see how they play and see if I can take anything from that.

“At Liverpool there is always going to be high competition for a place on the pitch. No matter who you are, you don’t have a right to play for them and certainly not myself, having only played a handful of games when the new boys came in.

“It didn’t surprise me [when Kabak and Davies were signed]. I knew the situation the club was in, in terms of personnel, centre-backs and injuries, and we needed more players in that position.

“For me, it was just a case of when I get my opportunity to play as well as possible and do as much as I can to take it and make sure I retain the place. That’s how I approached it.

“Ozzy came in and did a good job. He helped us out massively. I don’t think we’d have finished the season the way we did if he hadn’t come over and helped us out so much.

“You want to be playing as much as possible but you have to earn it. There are occasions when you get on there by default because of injuries, but they don’t come along very often.

“If you want to play as often as possible you need to embrace that fight and play to a high enough standard to hold off such competition.”